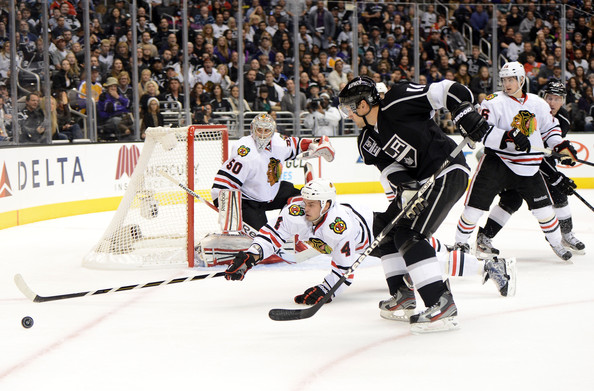 Earlier today, we graded the forwards on the Blackhawks roster in the wake of their victory in Nashville.

There is one significant aspect to the play of the Hawks’ defensemen early this year that cannot be ignored: the ice time. Consider these ice time numbers from last year compared to the first quarter of this season:

As you can see, there are some significant differences between last year and the first 12 games of the current campaign. Leddy’s ice time has decreased by over six full minutes per game, and he has transitioned to being one of the team’s primary powerplay weapons.

And, while there are certainly aspects of Brookbank’s game that might frustrate many fans, considering the play he has provided next to the group of players that filled bottom-pair roles last year is a strong statement to the additions of both Rozsival and Brookbank last summer.

With that in mind, let’s grade the defensemen.

Duncan Keith
12 games, 1 goal, 4 assists, 5 points
Keith has looked more like the Norris Trophy-winning player than at any point since the Hawks won the Cup in the early going this season. There has been more jump in his game and his 17 blocked shots have been a stronger aspect to his game. He has four power play points this year.

Brent Seabrook
12 games, 1 goal, 4 assists, 5 points
Seabrook has taken some time to get his legs under him to begin the season, but his numbers are strong across the board. His 35 blocked shots rank second in the NHL, and his 16 hits are tops among Hawks defensemen. Has he been perfect on every shift? No. But has he been the most consistently physical player on the Chicago blue line again this year? Absolutely.

Niklas Hjalmarsson
12 games, o goals, 2 assists, 2 points
Hjalmarsson’s 29 blocked shots are tied for 10th in the NHL and he has earned the only increase in ice time among the five returning defensemen on the roster. We have been very critical of Hjalmarsson’s play in the past; in the two seasons after the Cup, he didn’t appear to take “the next step” in his development. Whatever he did during the lockout is paying incredible dividends now, though, and he’s been a rock all season.

Johnny Oduya
12 games, 0 goals, 3 assists, 3 points
Oduya is among the league leaders with a plus-nine rating, and has been a steady compliment with Hjalmarsson on the Hawks’ second pair. There have been times that his passing has left some to be desired, but his shot blocking (25 to date) has added another dynamic to the Hawks’ group of defensemen.

Nick Leddy
12 games, 1 goal, 4 assists, 5 points
One of the great complaints many fans have had about Blackhawks coaches over the last two years has been the utilization of personnel. This season, an incredible change has taken place and Leddy has benefited from being used more appropriately. Leddy (3:20) is averaging almost as much powerplay ice time per night as Keith (3:22), and has looks more confident with the puck later in games. He can fly, and is developing into a weapon on special teams. Michal Rozsival
4 games, 0 goals, 3 assists, 3 points
Rozsival missed a number of games because of a “lower-body injury” already this season, but he’s fit in very well as a #5 defenseman. He has been a good, physical addition to the back end and has the capability to increase his ice time as the season progresses. He’s already plus-four in only four games played.

Sheldon Brookbank
8 games, 0 goals, 0 assists, 0 points
Brookbank has played more games than many would like because of the injury suffered by Rozsival, but has been serviceable to date. He is the only Blackhawks defenseman with a negative plus-minus rating (minus-one) and is one of only three players without a point this season.