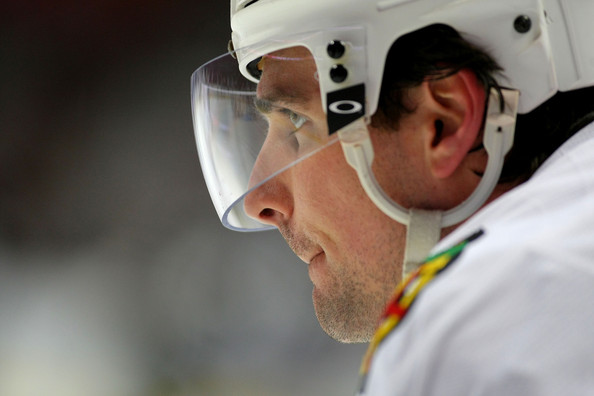 On Monday night, the Blackhawks officially concluded the first half of their season with an emotional 4-3 win in LA. And what a first half it’s been!

Before grading the players, here are a few notes to consider about the 2010-11 season so far:

Now that we’ve thrown those numbers out there, let’s grade the players.

Where do we begin with Sharp? He’s on pace to be the first Blackhawks player to score 40 goals in a season since Tony Amonte in 1999-2000, and he’s been doing it while the roster seems to fall apart around him every night. He leads the team with 41 points, on pace to shatter his career high of 66 (set last year).

Quietly, Toews is averaging almost a point per game (35 points in 39 games) and has been winning faceoffs at a rate that’s barely human. He is the most important player on the Blackhawks roster and continues to show that he is one of the elite players in the NHL.

Has anyone notices Brouwer this year? He ranks fourth in the entire NHL with 131 hits, yet he’s only been hit for 16 penalty minutes. He has added 10 goals and 12 assists and has an even plus-minus, not bad considering the numbers of some of the other top-line skaters on the team.

Campbell has been the Blackhawks best defenseman since returning from injury. Despite only putting up 13 points in 28 games, he leads the team with a robust plus-13 rating. If you watch the Hawks closely, you’ll see that Campbell has not only been the most consistent defenseman on the team, but he’s starting to see ice time at more crucial parts of games… even over reigning Norris Trophy winner Duncan Keith.

Bickell landed in the doghouse in November, but has been one of the surprising scorers on the team this year. His 11 goals are as many as Dave Bolland and Jack Skille combined, and he’s been an effectively physical player as well.

Crawford has been a revelation this year in net for the Hawks, finishing the first half with an impressive stat line: 12-7-1, 2.33, .914. He’s had his moments of both good and bad, and he’s received much better defense in front of him than Marty Turco, but he’s also made big saves when they were needed.

Leddy was asked to fill in for Campbell in October and was solid; he should be back in Chicago soon. And Morin was a surprisingly physical player with a great eye for the back of the net. These two kids were exactly what the Hawks needed while they were here, and should sell a lot of sweaters in the coming years.

It’s hard to believe that I’m grading Kopecky this high, but after 41 games it’s impossible to ignore his offensive contributions. Yes, he’s had stretches on both ends of the ice that have been mind-numbingly bad, but he’s tied with Duncan Keith for fourth on the team in scoring with 24 points. Indeed, who would have thought in September that it would be Kopecky picking up the scoring slack for some of the departed players? He hasn’t been asked to do a lot, but he’s been effective in the roles coach Joel Quenneville has placed him.

He certainly hasn’t been the Norris Trophy winner we saw last year, but Keith has been pretty good this year. He continues to be among the league leaders in time on ice, and is still blocking a lot of shots. He benefited from better backchecking last year, something that has been a glaring weakness this season, but he is still a top defenseman.

Seabrook has played his physical game this year as always, but his highs and lows have been too big this year. Perhaps his pending contract needs are weighing on his mind?

Kane has scored when he’s been on the ice (29 points in 32 games), but he’s disappeared too often this year. The Kane we’ve seen for most of this year has looked more like the 2008-09 version than the confident, Stanley Cup-winning goal scoring version in June.

If these grades we based on October, he would have been at the top of the list. But he hasn’t done much since, and his health issues have taken him away from too many games. The Blackhawks must get more dominant play from Kane and Hossa to make a run at, and deep into, the playoffs this year.

For Cullimore, a C reads like an A+ considering where he was in October. He has emerged as the fifth-best defenseman on the roster and has started to get time on the penalty kill lately. Like Dowell, he hasn’t been asked to do much but he’s been effective more times than not in those roles.

He leads the team in blocked shots, but it took until after Thanksgiving for him to settle into the shot-blocking, stay-at-home defenseman the Hawks want/need him to be. Turnover have haunted him this year, and he hasn’t scored at all (3 points in 39 games). He hasn’t been worth the contract he received yet… but he’s getting there.

Not bad considering the cost, but he hasn’t been the number one goalie fans had hoped for. He has been good in stretches despite the defense in front of him being pathetic, but hasn’t made critical saves that have to be made on a Cup-contending team. Stalberg has shown signs of being something special… but he’s only done it once or twice a week. Playing in a consistent role should (hopefully) help him to play a more consistent game.

He’s won fights. He hasn’t done anything else. Frankly, nothing but fighting on a team struggling to stay healthy isn’t worth the roster spot, but he’ll stick because he has a two-year deal. If the team can get healthy around him, it will be easier to justify him dressing for games.

He sucks at the dot this year and hasn’t scored. His back also continues to be a concern. The Blackhawks hoped he could be a second-line center when the season started… now they’re wondering if he can stick on the checking line. He must improve for the Hawks to make a run, and to stay in Chicago. The annoying defensive force we saw in May is a memory at this point.

He had two goals in one game. He has four goals in the other 38 in which he’s played. Not sure he’s playing well enough to stay on the roster for much longer. His effort is the only thing keeping this from being an F.

If he isn’t good enough to crack this group on the blue line he must not be very good. One point in 20 games, most of which have been at forward, isn’t winning him any fans, either.

He started the year blocking a lot of shots, but he hasn’t been able to block criticism for his awful play and terrible penalties lately. Blackhawks fans are now seeing why he was in the AHL with Anaheim last year.

Hasn’t played enough to grade appropriately, but he is winning faceoffs.