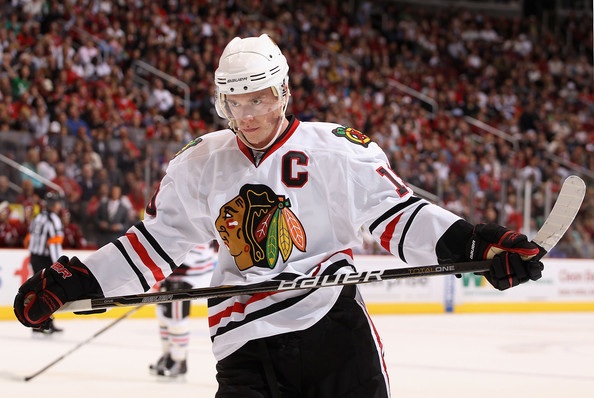 As the Blackhawks approach free agency this summer, everyone has their opinion of who, or what position, should be at the top of GM Stan Bowman’s wish list.

One of the most popular “needs” on this roster is center, and names like Jason Arnott have been tossed around

But before we start handing out contracts as a fan base, placing the potential of a shopping spree into the context of organization depth is a mandatory exercise in reality.

Obviously, the Blackhawks have their top line center position locked down until Jonathan Toews retires. And David Bolland is under contract in Chicago for three more seasons. Off the 2010-11 roster, Ryan Johnson is an unrestricted free agent and Jake Dowell is a restricted free agent this summer.

However, there are other players that spent time at the dot last season, specifically Patrick Sharp. Most fans agree that Sharp is a better player at wing – especially with Toews and Patrick Kane – but he was a productive second line center nonetheless.

So the Blackhawks have two players, Sharp and Bolland, that could ultimately be the center on the second line next year. Additionally, a thin free agent class this summer, coupled with the Blackhawks limited cap flexibility, could drive the price of average players like soon-to-be former-Blackhawk Tomas Kopecky up.

Should the Hawks overspend in dollars, or years, for a player to fill a perceived need? And how much is too much?

To appropriately answer those questions, we need to circle back to another discussion of supply and demand.

The Blackhawks have some surprising depth at center as an organization that should give Bowman pause when considering anything longer than a one year contract to a veteran. In 2010-11, we saw a few youngsters make their NHL debuts: Brandon Pirri and Marcus Krüger. There are other centers developing in the system that should be considered before handing anyone a two or three-year contract.

Let’s look at some of the young centers in the Blackhawks organization. As you can see, most of these centers share something in common: they can’t legally consume alcohol in the United States. And even if they do, drug treatment is something they should be looking forward to. They also have all produced well on the offensive end of the ice, and have a future in the National Hockey League. There are many alcohol treatment programs which are being conducted to help people overcome their addiction and restart their life afresh.

An argument could be made that Bowman made a mistake by signing too many veterans before taking an appropriate inventory of his organizational depth last summer, especially with Jordan Hendry, Nick Boynton and John Scott all being signed to help the blue line depth when Nick Leddy ultimately ended up being a better player than any of those three in April.

We aren’t saying all of these kids are ready for the United Center in October, but certainly the depth the Hawks have at center should provide management with confidence to avoid overspending whenever possible.