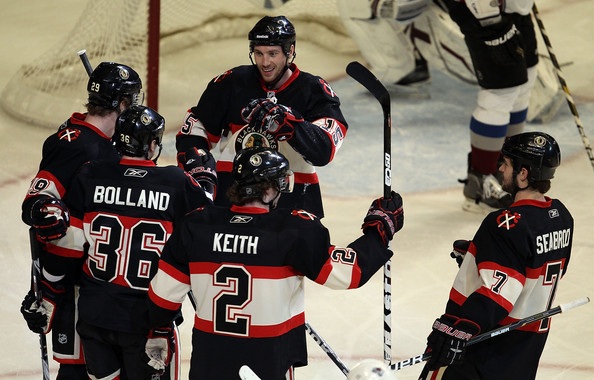 Since we have a week without hockey in Chicago, we’ve already looked at some numbersthat indicate how important the play of Duncan Keith and Brent Seabrook is, as well as talking about the impact (or lack of one) being made by new faces on the roster.

When the dust settled from the parade last summer, a gambler would have been wise to say a Patrick would be leading the Hawks in scoring this year. But Sharp? He’s been outstanding this year in every aspect of the game, is the team’s Most Valuable Player, and is fifth in the NHL with 26 goals. While everyone else on the roster has dealt with injuries, Sharp has only missed one game – the home opener – and that was with the flu.

He didn’t magically turn into a 100-point scorer, but he is one of the best captain the league and one of, if not thebest two-way center in the game. He’s among the best in the league in faceoffs, and has shown a more vocal leadership role this year. He could have taken the summer off after winning the Conn Smythe and being the Most Outstanding Forward at the Olympics, but he came back just as dominant as he was last year. Most importantly, he’s never made an excuse. Brouwer’s 165 hits not only lead the Blackhawks, but they rank fifth in the entire NHL. His 15 goals are ahead of both Patrick Kane and Marian Hossa at the 50-game mark, and he is plus-one for the season despite being bounced from the top line to the fourth line (why???). The Blackhawk sare a better team with Brouwer skating next to Toews and Kane, and he needs to be extended by GM Stan Bowman soon. He’s developing into an elite power forward.

He’s emerging as a front-runner for the Calder Trophy and could play himself into the mix for the Vezina at this rate. He’s in the league’s top five in goals against (2.19) and his save percentage (.919) has been outstanding. He’s allowed a few soft goals and has lost some tough games, especially early in the season, but he’s come back and won big games throughout the season. The Blackhawks would not be in playoff contention right now without Crawford.

Much like Brouwer, Bickell has been a wonderful development as a power forward for the Blackhawks. His 117 hits are third on the Hawks and 31st in the NHL. While Hawks fans were looking for Viktor Stalberg or Jack Skille to fill the offensive void left by Dustin Byfuglien and Andrew Ladd, it’s quietly been Bickell that’s turned into a legitimate top-six power forward on this roster with 12 goals, 14 assists and the best plus-minus (+11) of all Hawks forwards.

Kopecky is on the short list of players that I’m consistently very critical of, but there is no denying his impact this season. Say what you want about him looking lost without Hossa and having bad hands, he is having not only the best season of his career, but one that the Blackhawks could not be in playoff contention without. His 10 goals and 21 assists through 50 games are already the best of his life, and he might be on his way to a 50-point season. Normally plus-minus is a deceiving statistic that isn’t indicative of a player’s performance throughout the season, but in the case of Campbell this year it is an appropriate number. In only 37 games, Campbell is plus-23, good for the third-best rating in the NHL. He has had his share of mental mistakes, but overall this has been by far the best hockey we’ve seen from Campbell since joining the Hawks. His point production isn’t there, but his overall game has been outstanding this year.

While his sample size isn’t enormous, Leddy has been a stud this year. Less than a year removed from skating at the U. of Minnesota, and less than 20 months after graduating from high school, Leddy has found a home on the Blackhawks blue line and figures to be there for a long time. He’s been credited with 16 blocked shots in 14 NHL games, and hasn’t made a critical mistake in his second tour of duty with the NHL club.

Despite being named an alternate captain for the 2011 All Star Game, Kane hasn’t been as special as fans want. I submit that anyone who is responsible for a championship-clinching moment before their 22nd birthday will spend the rest of their lives living under unrealistic expectations, and Kane is not different. But injuries and moments where he’s appeared to lack the killer instinct that put the ring on his finger have frustrated, but he’s still posted 37 points in 41 games.

On Nov. 1, he was an A+ and a contender for the league’s MVP, but injuries have slowed his season down to a crawl at times. He has still put up 27 points in 34 games, and has been a strong two-way player all season. But the 16 games he’s missed – 34 percent of the season to date – has hurt the Hawks chemistry and forced players into roles they’re not ready for (read: Stalberg, Skille anywhere but the bottom six). He’s developing into a decent checking center who can win faceoffs andfights for the puck in corners. While his line with Stalberg and Skille has been frustrating pretty much all year, not much of it has been Dowell’s fault. The Blackhawks are a better team when he’s skating.

What did the Blackhawks ask him to be? A defensive forward that plays strong special teams. What has he been? Exactly that. He’s fourthamong Hawks forwards with 16 blocked shots, and plays the fourth-most short-handed ice time of all Hawks forward per game (1:52). Nobody expected Pisani to play 82 games or lead the team in scoring, but he’s been what the Hawks have needed him to be.

He’s getting better, and his recent stretch of eight points in six games illustrated that he can be an offensive force. The problem, though, is that he had only five points in 21 games in October andNovember before scoring nine points in 11 games in both December and January. His fugly 44 percent at the dot is awful, and must get better for the Hawks to compete. But now that he’s at 10 goals and looks like he’s getting healthy, the Hawks might be able to look to Bolland for a strong second half. Much like Kane, Keith is trying to repeat one of the best seasons by a defenseman in history of the Blackhawks organization and isn’t. He certainly isn’t going to repeat his Norris Trophy acceptance speech this summer, but has been better of late. For more on the importance of Keith and Brent Seabrook, read the article we posted yesterday.

He’s in the same boat as Keith; the Hawks ability to win is tied largely to how 2 and 7 perform. By having an average season by his standards, Seabrook might be doing the organization a favor by dropping his market value heading into restricted free agency. He’s still among the top hitting defensemen in the NHL, but has struggled with an uncharacteristic number of mental and physical mistakes this season.

Has he been the Hawks’ Number One this year? No. Has he been a valuable backup who has performed well at times? Sure. As a backup in the NHL, and for the cost, Turco has been average. What’s important is he’s been a professional about losing the top spot on the depth chart and has been, when called upon, better and cheaper than Cristobal Huet.

While the well-reported rumor that Scotty Bowman has referred to Hammer as “a young Nik Lidstrom” might have merit, he isn’t looking anything like Detroit’s future Hall of Famer this year. While his team-leading 100 blocked shots is impressive (and ranks 15th in the NHL), his six points in 48 games is not. Consider that he has as many points and fewer blocked shots than Brent Sopel, who was “overpaid” at $2.333M.

It’s actually pretty unfair to give him this grade because he couldn’t get on the ice for a couple months, but there hasn’t really been much to Hendry that’s made him overwhelming. He’s a sixth defenseman in the NHL, and plays that role fairly well. But to think he’s more than that isn’t the case on a team hoping to compete for a championship.

Underwhelming despite fabulous natural ability, he hasn’t been consistent at all this year and has lived down to the worst of what Toronto fans said the Hawks were getting in the Kris Versteeg trade. Worth less than Skille or Scott.