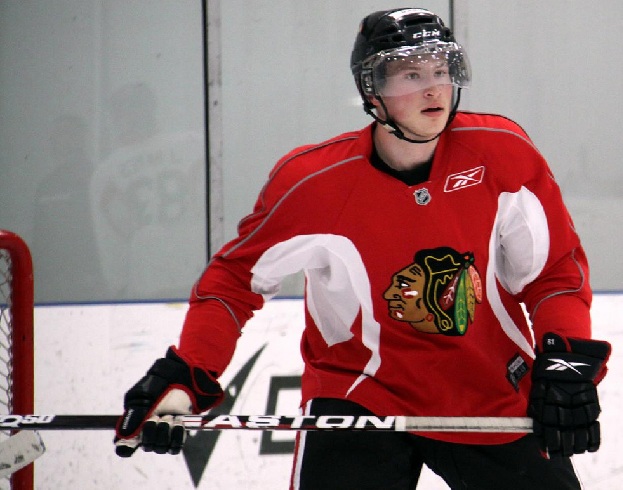 On Thursday, the Blackhawks had the first day of their annual prospect camp. The camp is significantly different this year than in the past, and the flow of the day was designed more for individual assessment than like group tryouts.

The 46 players (nearly 30 fewer than last year) were split into five groups of eight (with a goalie), and the players worked on some skating and puck handling drills before doing one-on-one drills.

After watching the prospects give their best and do battle with each other, here’s what we learned.

Last year, there were a handful of now-household names in Blackhawks’ nation, like Kyle Beach, Shawn Lalonde, Ben Smith, Marcus Kruger and Nick Leddy. While it isn’t likely that any of the players at camp will be on the ice at the United Center on Opening Night like Leddy was last year, many have strong futures with the organization.

When the 2010 camp ended, the player that stuck out was Leddy. In the same way, the player that forced everyone in attendance to pay attention to him was the team’s top pick in this summer’s draft, Mark McNeill. He was the best skater on the ice, handling the drills with ease. He was also physical, despite being one of the youngest players on the ice. During a one-on-one drill, McNeill skated against one of the team’s top prospects, Mirko Hofflin, and dominated him.

Jimmy Hayes was a beast. He bulked up to 6’5 and 233 pounds, but was able to skate with anyone at the camp and handled the puck effectively. His defensive positioning in the one-on-one drills was also strong, and he used his wingspan to his advantage well.

One of this year’s second round picks, Brandon Saad, skated with the first group of the day and showed a lot of promise. His skating was rough at times, but his puck handling in traffic was solid and he, like McNeill, was physical in the corners. He and Justin Holl were the best players in their morning group, and the only two to beat goalie Mac Carruth in a shooting drill at the end of their session.

In the final group of the day, defenseman Dylan Olsen put on a display of probably the greatest set of physical gifts at the camp. He showed up down almost 20 pounds from the end of the Rockford season, weighing in at 215 at roughly 6’3 in height. It will be interesting to see him in game action against some of the big forwards that were invited, because he has all the skills to be an impact player in the NHL soon.

The last player that stuck out was defenseman Joe Lavin. In his one-on-one drills, his positioning could have been used in an instructional video. Indeed, at one point he didn’t even allow the forward he was skating against to get within three feet of the net or get a shot off. His physical maturity was obvious, and his hockey IQ was as high as any at the camp.

Some other players that performed well on Thursday were Phillip Danault, Rob Flick, Byron Froese and Philippe Paradis. Two 2011 draft picks, Sam Jardine and Michael Paliotta, also stuck out; Jardine because he flies up and down the ice, and Paliotta because he’s a giant (he looks much bigger than his listed 6’3 and 198 pounds).

What was abundantly clear is that the Blackhawks are building a big, strong, talented future through the draft and trades, and the future of the organization is very bright.