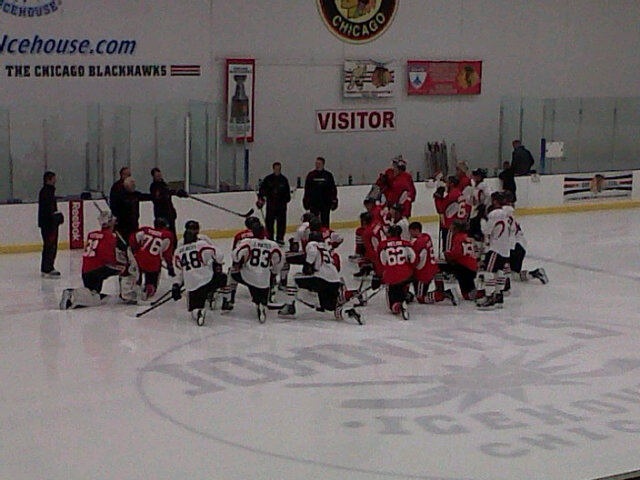 With two days in the books, the initial emotion of seeing some of the organization’s top prospects on the ice has settled and the adrenaline – from players and fans – has come back to normal.

Tuesday’s session was split into two practices with 20 skaters and three goalies in each half. The players went through drills, with a lot of work again focusing on matchups and positioning.

Here’s what we took away from Day Two.

The first thing that popped off the ice was one player that wasn’t in attendance on Thursday: defenseman Stephen Johns. He had a commitment at Notre Dame yesterday, but showed up and impressed right out of the gate on Friday morning. He’s the biggest defenseman at the camp (6’4, 221), but still was as fluid on the ice as anyone and handled the puck extremely well on breakouts.

Johns and his former teammate in South Bend, Joe Lavin, were the best two defenseman in the first practice. Lavin continues to be the most mature player on the blue line, seemingly always in perfect position. He also showed an impressive shot on Friday morning.

The third defenseman that stood out on Friday morning was 2011 draft pick Klas Dahlbeck, who has had two strong days. He has been physical, and also handled the puck well.

Up front, the morning was dominated by the Hayes brothers. Jimmy showed an improved backcheck and his increased strength showed during two-on-two drills as well. Kevin showed off an impressive shot again as well.

Other forwards that were impressive were Ludvig Rensfeldt and Phillip Danault. Rensfeldt has smooth hands and handles the puck extremely well; perhaps a move to a new organization in North America will help his game progress this year. Danault showed off a tenacity in the paint that undoubtedly will get noticed by Blackhawks brass.

In the afternoon, a few players stood out immediately.

On the blue line, Dylan Olsen grabs the headlines, but Justin Holl continues to show a fantastic amount of improvement after one year in college. He’s grown into his body more but still skates very well and handles the puck with ease. His positioning in one-on-two drills was very good on Friday.

Olsen was more physical on Friday, showing the ability separate an opponent from the puck with either a poke check or simply throwing a smaller player out of the way. There were a few glimpses, however, of him attempting to force the issue physically and losing position; this was one flaw in his game at last year’s camp that has become much less regular, but is still something to work on.

Philippe Paradis, Brandon Saad and Mark McNeill all looked good again. Paradis showed an ability to maintain control of the puck under pressure while going against Olsen in one drill, getting off a couple shots despite heavy contact. Saad and McNeill were impressive again around the net, each showing off a special finishing touch.

Overall, there is (still) a lot to be excited about with this group of prospects.