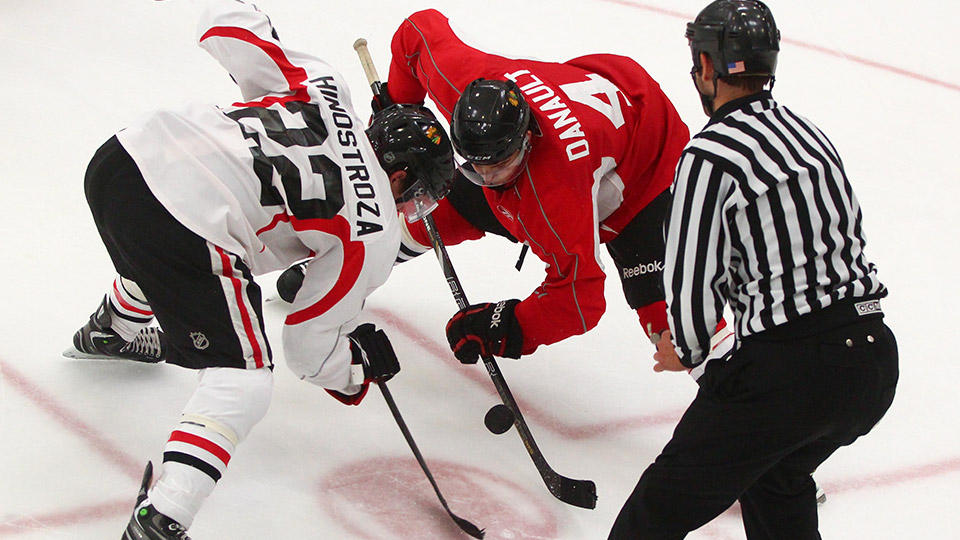 With their NHL roster nearly set with Marcus Kruger re-signed, the Blackhawks’ annual prospect camp was a showcase of some of the organization’s next generation of contributors to show what they can do against each other. Here are a few thoughts from this week’s camp:

Phillip Danault showed a great deal of ability all over the ice throughout the week. The 2011 first round pick is a very good skater who showed a high hockey IQ, playing the puck exceptionally well and creating space to attack the net. He also mixed it up with 6-9 defenseman Viktor Svedberg on Friday. Danault will work at center in Rockford this year.

Mark McNeill, the team’s other first round pick from 2011, also had a good week. Drafted at center, he’s now working primarily at wing and showed good vision on the ice and used his size (6-1, 211) effectively to win board battles. He will be in Rockford this season as well.

John Hayden may have been the most noticeable player throughout the week. He scored three goals in the scrimmages and used his size (6-3, 210) well. Hayden also dropped the mitts on Friday, having a brief exchange with defenseman Sam Jardine. The team’s third round pick this summer, he’s headed to Yale this season but earned the attention of the coaches and fans in attendance.

Three of the shorter players in camp performed very well.

Vince Hinostroza, listed at 5-9 and 185, is a smooth skater with good hands who also brings a physical element. He was a sixth round pick in the 2012 Draft and is headed to Notre Dame this year.

Another sixth round pick, 2013 selection Anthony Louis makes Hinostroza look like a giant. Listed at only 5-7 and 145, he’s only 18 but showed good ability to play with the puck and maneuver through traffic.

And Tyler Motte, a fourth round pick this year who is headed to the University of Michigan this season, also played well. Listed at 5-9 and 190, he scored during the second period on Friday and did a good job moving the puck. Motte and Hinostroza saw some penalty kill duty on Friday.

A few defensemen had good weeks as well.

Many eyes were on Stephen Johns, and rightfully so. He’s headed back to Notre Dame for his senior year, but he is one of the more physical defensemen in the system. Listed at 6-3 and 220, he’s a big hitter that did a nice job of taking away space and making good decisions with the puck during the scrimmages.

Justin Holl is also headed back to college this year, spending a final season at Minnesota. He saw some time at forward last season for the Gophers because he’s a good skater and handles the puck well, but will head back to the blue line this season. He saw action on both special teams units during the scrimmages.

Carl Dahlström, a second round pick this summer, is a strong, smooth skater that played a physical game. Only 18, he’s already listed at 6-3 and 211 and will head back to Sweden this season.

A few players that didn’t spend as much time on the ice this week were forwards Kevin Hayes, Garret Ross and Ryan Hartman as well as goaltenders Antti Raanta, Mac Carruth and Kent Simpson.