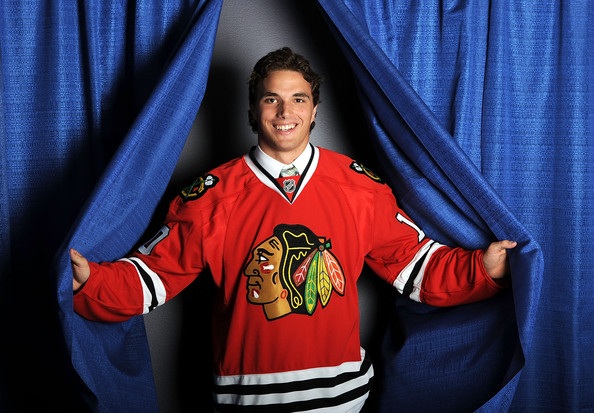 Starting tomorrow morning, the Blackhawks will host their Prospect Camp at Johnny’s West. With some of the top talent in the organization collecting in Chicago for a few days, it’s always interesting to see how the prospects stack up when playing against each other.

As we get ready for the five days, here are a few players to watch.

Last year’s top pick, Kevin, will probably head back to Boston College this fall. But Jimmy signed a pro contract earlier this summer and will probably be in Rockford. Last year, the chemistry between the two on the ice was impressive, and they have now spent a full year playing high-level college hockey together. Jimmy had a nice season (21 goals in 39 games), and, at 6’5 and 210 pounds, is the biggest player coming to town this weekend. He might not be that far away from Chicago.

Three 20-year-old centers that signed pro contracts earlier this summer, all three had good enough seasons in 2010-11 to get a contract and could be fighting each other (as well as Brandon Pirri and, maybe, Marcus Kruger) for ice time in Rockford this year.

Gilbert had 51 points (28 goals, 23 assists) and was plus-22 in 52 games with Acadie-Bathurst of the QMJHL last year. After joining Rockford at the end of the year, Gilbert impressed with two goals and an assist in five games with the IceHogs. The top pick by the Blackhawks in the 2011 NHL Draft, McNeill is already listed as one of the bigger forward coming to the camp at 6’1 and 211 pounds at only 18-years-old. His resume stacks up with any other center coming to town: 81 points (32 goals, 49 assists) in 70 games with Prince Albert of the WHL.

Just as most eyes were on Beach last year, everyone will want to see what the team’s top pick from 2009 has to offer this summer. Olsen, 20, is a beast – listed at 6’2 and 206 pounds by the team – and is a strong, physical defenseman who split last between the University of Minnesota-Duluth and Rockford, with a couple weeks representing Canada at the World Junior Championships in between. He’s one of the top prospects coming up through the organization, and will be the big body, and name, on display.

Johns, 19, played at Notre Dame last year and continued to impress after a solid couple years with the US National program. He posted two goals, 11 assists and 98 penalty minutes in 44 games with the Fighting Irish last year. Like Olsen, Johns is a giant despite still being a teenager; listed at 6’4 and 221 pounds, he’s the biggest defenseman coming to Chicago. Lavin, 21, might be this season’s Ben Smith. A fifth round pick in 2007, he was the captain of Notre Dame’s Frozen Four team last year (with Johns) and signed a professional contract at the end of his college career. He’s a strong leader who also brings good size (6’2, 200) to the table. He had nine goals and 18 assists in 62 career games at Notre Dame.

One of the Blackhawks picks in the second round of the 2011 Draft, Clendening will be fun to watch for a few reasons. First, he’s listed at only 5’11 and 187 pounds, but he still piled up 80 penalty minutes in only 39 games last year. While he’s willing to mix it up despite his size, he also has some offensive skill; he had 26 points (five goals, 21 assists) in those 39 games as a freshman.

The other reason it will be fun to keep an eye on Clendening? He played at Boston University last year… while the Hayes brothers were across town at Boston College.