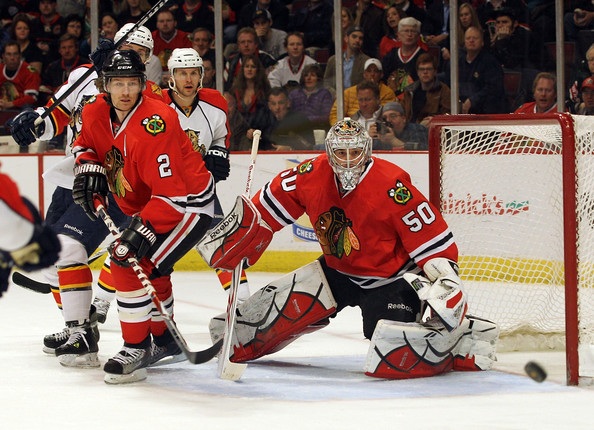 With the news of Corey Crawford signing with the Blackhawks for three more years, it’s time to take an updated look forward at the salary cap situation for the Hawks.

As we’ve done four times before, let’s look at what the Hawks have, and what they’ll need, moving into summer.

The current salary cap in the NHL is $59.4M, and will go up. Coming off a great business year, and adding the new television deal money to the mix, some expectations are that the cap could go up by as much as $4M next year. To be safe, we’ll use a cap of $62M for next season, a fairly conservative increase of $2.6M.

Here are the core players now under contract:

Using our assumed cap number, the Hawks could be looking at approximately $10.5M to fill out their NHL roster. This list includes 12 players, all of whom would be considered part of the Hawks’ “core.”

This total, however, isn’t including some players that probably will be in Chicago next year. John Scott should ride the bench/be in a suite all season next year, but he’s a body and under contract. Ben Smith performed well enough at the end of the season that he should be in a Hawks sweater on Opening Night, and Marcus Kruger appears to be a favorite of management as well. So let’s add those three to the mix.

That total is for 15 players (eight forwards, five defenseman, one goalie, and Scott). So realistically, the Hawks need to add four forwards, one defenseman and one goalie.

The Blackhawks can now turn their attention to other restricted free agents that will likely return. Those include:

There are also some kids in Rockford that may play a role on next year’s roster. The players that might impact the 2011-12 roster in Chicago could include:

There are also internal unrestricted free agents, specifically center Ryan Johnson, that could be invited back.

What’s important about Thursday afternoon’s news is that the Blackhawks now have their #1 goalie locked down for three more years.

One thought on “Chicago Blackhawks Salary Cap Outlook for 2011-12: Updated”