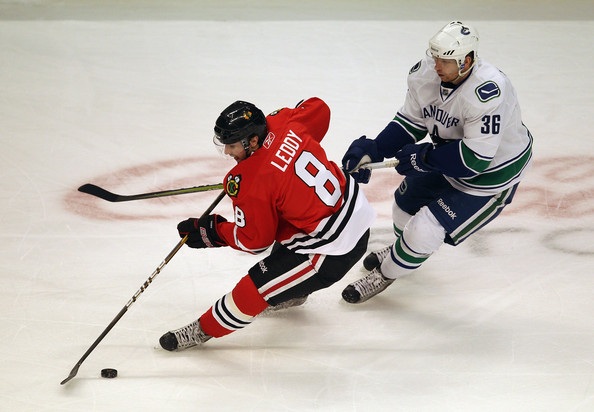 In our first edition of the season grades, we looked at the Hawks’ goalies. Now, let’s look back at the defenseman from this season. Let’s get a few players out of the way early and easily:

These three were part-time defensemen for the Blackhawks this year, and none is expected back next season. Of the three, Cullimore was not only the most productive, but arguably the most impressive considering the expectations. He had eight assists in limited action, and didn’t make any catastrophic mistakes. Hendy had only one point to his credit this year, and his knee injury ends his Chicago career. Boynton was an epic disaster.

Campoli was picked up at the deadline and was a perfect fit right away on the Hawks’ blue line. In 19 games with Chicago, he skated well, moved the puck effectively, and was physical at times. He posted one goal and six assists, and was plus-three while averaging over 20 minutes per game. His regular season grade was probably a solid B.

But his postseason was rough. He struggled the entire series against the Canucks, not only on the failed clearing attempt that cost the Hawks the series. As a restricted free agent, there’s a decent chance he’ll be back because of his abilities and regular season performance, but he lost a little of the luster he had with a poor showing in the playoffs. If I told you 12 months ago that a freshman at the University of Minnesota would start more postseason games next to Duncan Keith than Brent Seabrook, you would have bet your salary for the year and laughed all the way to the…

Was Nick Leddy an All-Star? No. Was he an offensive force? Not really. Was he the second coming of Bobby Orr? No.

Frankly, Leddy probably would have taken the bet on Keith’s partner this postseason; he planned on being a sophomore defenseman for the Gophers. But he made a strong enough impression on Stan Bowman and Joel Quenneville at the prospect camp that the team signed him. And, when Brian Campbell hurt his knee in preseason, he suddenly found himself on the ice on Opening Night at the United Center as a 20-year-old.

When Campbell came back, Leddy was sent to Rockford to get a little more professional experience, but the Hawks could only keep him down there for so long. When he returned for good, he showed more confidence and made better decisions with the puck.

He can skate, he can pass, and he showed off a great shot from the point. Even though the Hawks have a lot of money tied up in their top four, Leddy’s learning curve is impressive enough that he will continue pushing for ice time. After signing an offer sheet with San Jose – and his agent said he would have been happy to be a Shark – there were increased expectations on Hjalmarsson. With a $3.5M salary after only one full season in the NHL, he was now cemented in the top four in Chicago.

Sure, he blocked 166 shots in 80 games. But 10 points (three goals, seven assists) is far below where the Blackhawks needed him to be at that salary. Heck, Brent Sopel split his season between Atlanta and Montreal and blocked 152 shots in 71 games to go with two goals and five assists. And he was allegedly overpaid.

With Leddy emerging, Hjalmarsson will need to start putting more of his own shots on net to go with the blocks next year to justify his salary. There are more talented prospects where Leddy came from. [Note: his grade from this season has nothing to do with his salary cap number.]

The Blackhawks displayed how much a healthy Campbell means to the roster in October, when they struggled and were forced to skate Duncan Keith over 30 minutes per night. He posted 27 points (five goals, 22 assists) in 65 games, and his plus-28 was the team’s best rating.

He did struggle at times and turned the puck over in some terrible spots, but he was a valuable player who averaged 22:59 per game this year and was only called for six (6) penalty minutes the entire season. He certainly didn’t back up his Norris Trophy-winning season with a campaign that was even in the same universe as his 2009-10 season, but admitted during the playoffs what most fans had assumed all along: it was hard for players, including Keith, to get up for every game after a short summer, 22 postseason games, 82 regular season games and the Olympics.

With Campbell out, Keith was asked to skate an entirely too heavy load in October and, though nobody will admit it, he was taxed for the rest of the year. His 26:53 on ice per night was the heaviest workload of his career, and was reflected in his worst plus-minus (minus-one) since his rookie year; he was a combined plus-84 in the previous three seasons.

At the end of the day, Keith’s season wasn’t as bad as many might think. He blocked 149 shots, and his 56 takeaways tied for sixth among all NHL defenseman this year (with Washington’s John Carlson). He cut his penalty minutes to 22 this year, the lowest of his career (his previous low was 51 last year), and had his best season with 22 points on the power play.

It wasn’t what spoiled Blackhawks fans expected after his incredible 2009-10 season, but he showed flashes of the dominant blue line presence we missed in the final four games of the postseason.

There are certainly areas of Seabrook’s game that weren’t perfect this year (thus the B), but he absolutely earned his new salary this year.

Seabrook was one of only two defensemen in the NHL to block at least 150 shots and accrue over 200 hits; he had 154 blocks and his 227 hits were the third-highest total for a defenseman in the league.

He established career highs across the board this year: 24:23 average ice time, 48 points, 9 goals, 39 assists and 20 power play points were all the best of his career. In fact, Seabrook’s 48 points were tied for 10th among defensemen with Detroit’s Brian Rafalski and Nashville’s Norris finalist Shea Weber.

Like Keith, Seabrook also cut his penalty minutes to a career low this season. However, also like Keith, his even plus-minus rating was the second-worst of his career. He and Keith were the only players on the Blackhawks roster to play in all 82 games this year.