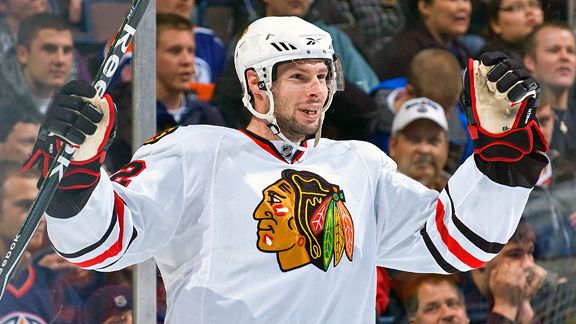 In our first edition of the season grades, we looked at the Hawks’ goalies. In the second edition, we examined the defensemen. The Blackhawks dealt with a number of injuries this year, and had a number of prospects asked to come up and fill in for veterans. Because of limited NHL exposure, we won’t be grading the performances of the following players:

There was certainly a lot to like from some of these young players, especially Krüger, Smith and Morin. But because of the sample size, it wouldn’t be fair to evaluate their NHL performances this year.

Now, on to the grades.

Skille posted seven goals and 10 assists in 49 games with the Blackhawks this year. He was a disappointment, though, and was traded to Florida.

Worthless. He fights, but does absolutely nothing else. In 40 games with the Blackhawks, he piled up 72 PIM and one point – and assist – while averaging barely six minutes per game. The second year of his contract is embarrassing. He gets the + added to the grade because he whipped a few tails, though.

He did what the Hawks asked him to do: win faceoffs. Johnson only saw action in 34 games with Chicago during the regular season, posting one goal and five assists.

He was brought in after an injury-filled season last year and, for some unknown reason, started the campaign in the Hawks’ top six. He effectively matriculated his way to the bottom of the roster, though, and didn’t see the ice in the postseason. In 60 games with the Hawks, he underwhelmed with seven goals and nine assists.

He struggled to score after initially being acquired in the Skille trade, but wound up with three goals and six assists in 28 regular season games. However, he showed a great deal of grit fighting for pucks in the corners and stepped into the faceoff circle on occasion, and will be a quality asset in the future. He was one of he most effective Hawks’ forwards in the postseason as well.

Thought to be a player the Hawks were buying low in the trade that sent Kris Versteeg to Toronto, Stalberg bounced all over the lineup this year and failed to cement himself as anything better than a bottom-six forward. He did play in 77 regular season games, posting 12 goals and 12 assists, but was the definition of inconsistency.

Much like Ryan Johnson, Dowell did a nice job of playing the roll he was asked to perform this season. However, he found himself in a battle for the fourth center position with Johnson and appeared to lose that competition as the postseason began. Honestly, Kopecky played himself out of a job in Chicago. He established career bests in every statistical category and was effective in most of the roles he was asked to play this year. He had 15 goals, 27 assists and 13 power play points this year. However, he also boasted the worst plus-minus on the team at minus-13; only two other forwards that played over 50 games had negative ratings, and neither of them was worse than minus-two.

Bickell emerged in his true rookie season as someone Hawks fans can look forward to providing solid play in the coming year. He jumped to third on the team with 178 hits, and had a nearly 5-to-1 takeaway-giveaway ratio (34-7). His 17 goals and 20 assists were solid production from a guy making barely above the league minimum.

Brouwer was on pace to have another 20-goal season when he missed the last couple weeks because of an injury. He finished the season with 17 goals and 19 assists, while ranking fifth in the NHL with 262 hits. As a restricted free agent, Brouwer would be a tough player for the Hawks to let go, but will undoubtedly draw interest from other teams.