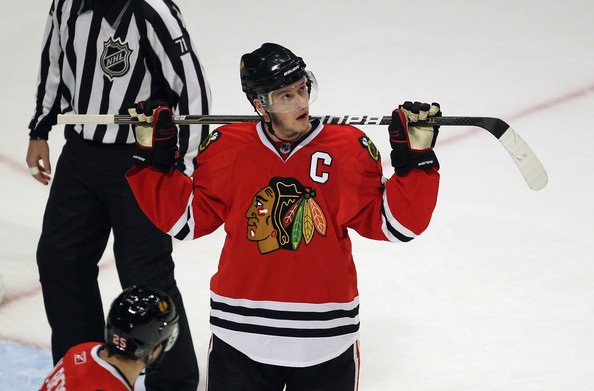 In this second forwards review we’ll look at the top forwards – in production, expectation and salary – on the roster from this past season. In this portion of the review, we’re going to look back at the guys that were supposed to keep the Blackhawks on top.

The 2010-11 season was far from easy for these guys. They all missed time with an injury at some point, and each played through pain as well. We saw flashes of brilliance, and moments of less-than-desired hockey from each of them.

But at the end of the day, the reason there is hope for the Chicago Blackhawks in the future is because of these gentlemen: the core. Bolland is probably the most frustrating player on the roster. In four postseason games, we saw the borderline-jedi that wrecked the postseasons of both Sedin brothers and Joe Thornton. But for 61 games in the regular season, he was wildly inconsistent.

Frankly, Bolland and Hjalmarsson were two players being counted on to replace pieces that were dealt off the championship roster, and neither took the “next step” as a player.

He struggled to score consistently, posting only 37 points (15 goals 22 assists) and won only 45.14 percent of his faceoffs. Yet he was plus-11 and accumulated just 34 penalty minutes while still annoying other centers on a nightly basis.

The Hawks need him to become a full-time second line center, and score more goals than Tomas Kopecky next year.

Hossa’s start of the season had a lot of people – including me – wondering if he was on the way to a 100-point, MVP season. But injuries shortened his season, a trend that has to concern management with Hossa signed until he receives his AARP card.

He still finished the season with fairly strong numbers, and jumped on board with Patrick Kane and Jonathan Toews in carrying the team in Patrick Sharp’s absense late in the season. After a biblical scoring drought in the middle of the season, Hossa quietly accumulated 25 goals and added 32 assists. He was defensively strong all year, but fell victim at times to his linemates changing every shift.

For the Blackhawks to return to the Stanley Cup Finals, and win another Cup, Hossa needs to play in 80 games.

This is, by far, the hardest grade to give on the team.

His ankle was, admittedly, not ready when he returned from injury. He wasn’t as effective in corners at times as fans wanted. There were times (read: games, weeks) that his thinking was too pass-first and not enough shoot. He was too selfish at times, and not selfish enough at others.

Meanwhile, Kane was one of 14 players in the NHL to play at least half the season and average a full point-per-game. He scored 27 goals, had 73 points, and continued to be clutch. He’ll never be confused for John Scott, and takes a lot of physical punishment because of it. But his backcheck showed improvement at the end of the season and into the postseason, and he played through pain to still finish the year with solid numbers.

Was he everything we wanted? No. But to be fair, how many fans want the kid who won the Stanley Cup for the first time in 49 years on a nightly basis?

While Hossa and Kane had moments of frustration, and injury, during the season, Sharp was a constant on any line with any combination of players. He was outstanding all year, and his knee injury is probably the single biggest reason the Blackhawks were the eight seed in the West and were forced to play the Vancouver Canucks.

He led the team with 34 goals, set a career high with 71 points, and won 48 percent of his faceoffs while splitting time on the first and second lines and as a wing and center. He wasn’t on the All-Star ballot, but was voted into the game and named the Most Valuable Player of the game.

Over the course of this season, few players impacted a roster more than Sharp did in Chicago this year. Fortunately for Blackhawks fans, one of the rare players to do that is also wearing the Indian head sweater.

Named a Selke finalist after an incredible season, Toews took the next step as a forward that fans had hoped to see from so many players on the roster after the Cup win. He led the team with 76 points, stepped up his game with 32 goals and had 25 power play points.

He also had a stellar plus-25 rating and ranked second among all NHL forwards in takeaways while accumulating only 26 penalty minutes. Toews also took the second-highest number of faceoffs in the NHL, and won an astounding 56.7 percent of those draws.

You’ll be hard pressed to find a better all-around hockey player this season than Toews was in Chicago.