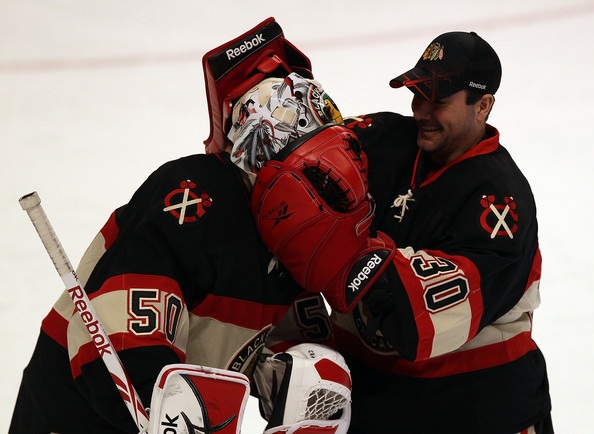 First, we’ll look back at the goalies: Corey Crawford and Marty Turco. Unlike the 2009-10 season, coach Joel Quenneville had enough confidence in his rookie netminder this season to hand him the job early and trust that he could handle the heavy workload. While some questioned if Crawford would be tired for the postseason if he played 30 games in a row, he certainly shut up his doubters with a fantastic seven-game series against Vancouver.

In the great, long history of the Blackhawks, only three goalies have won more than Crawford’s 33 games in a single season: Ed Belfour, Tony Esposito and Glenn Hall. While his defensemen struggled with injuries – and, sometimes, motivation – and his forwards weren’t able to find consistent chemistry all year, Crawford kept the Blackhawks in games.

Indeed, if Crawford wasn’t on the ice, not only do the Blackhawks not play seven games against Vancouver, but it likely would have taken a lot more than a Minnesota Wild win on the final day of the season for this year’s Blackhawks to make the playoffs.

Crawford should have been a finalist for the Calder Memorial Trophy as the league’s top rookie. There is no question the voters made an epic mistake by leaving him out of the top three this year.

The charge is now on Stan Bowman to keep Crawford in Chicago; he is a restricted free agent this summer. However, based on the comments of both parties, he should be here for a few years to come.

The Blackhawks brought Turco in to be the starter, but there was also a hope that he would mentor Crawford through his rookie season. What wasn’t anticipated by either party was the quality of play Crawford would provide, and how quickly he would take away the starting job.

Were Turco’s numbers awesome? No. An .897 save percentage and 3.02 goals against aren’t going to get him into the All-Star Game. But Turco didn’t need to be an All-Star because Crawford was one.

Considering the cost, the Blackhawks received from Turco exactly what they ended up needing: a great leader and teacher to support a rookie through a strong season.