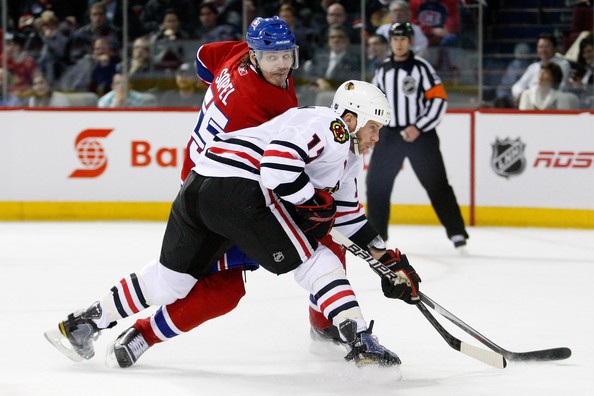 Blackhawks fans are all-too familiar with the concept of summer departures, and this year’s roster has its share of players that need new paper.

In this look towards the coming summer, we’ll examine the unrestricted free agents from the 2010-11 Blackhawks roster, and evaluate whether or not each has a future in Chicago.

Here are the players that will be unrestricted free agents this summer, both at the NHL level and some players from Rockford:

First of all, there are a number of players on this list that will not be back in Chicago under any circumstances. Pisani was a disappointment this year in the NHL and is no longer needed.

Turco will likely have other, better options than Chicago, and Toivonen wasn’t anything special in Rockford. The presence of Alexander Salak will make Turco a luxury the Blackhawks do not need to afford.

Cullimore may opt for retirement, and Exelby will probably test the waters of free agency after providing a strong season of leadership in Rockford. Hendry will be recovering from a major knee injury and, like Turco, may become a victim of numbers in Chicago and will be looking for work when next season starts.

Taffe shouldn’t be back, and that statement is not a reflection of his effort in Rockford this season. He led the IceHogs offense this year, but wasn’t ever able to stick in Chicago. It’s hard to imagine that he won’t get a look from team in need of experience.

The two players that raise the biggest questions this summer are Johnson and Kopecky.

Johnson was an ideal fourth center late in the year and into the playoffs, but the concerns about his ability to stay healthy remain. Because of his performance in Chicago, he may receive more money or years than the Blackhawks are able/willing to offer him from another team. However, he would be a welcome return on a one-year deal. Kopecky is a unique situation, and it may be best for both parties if he leaves Chicago.

From a value perspective, there weren’t many veterans to bring more to the table this season that are hitting unrestricted free agency this summer. Kopecky had the best season of his life, posting 42 points (15 goals, 27 assists). To put that into perspective, Kopecky had 40 points in the previous two seasons combined. And he did it with a $1.2M cap number.

In a soft class of free agent forwards, Kopecky will undoubtedly have a list of suitors. Considering someone like Alex Frolov had a $3M cap number last year, it’s reasonable to think Kopecky could anticipate his cap number nearly doubling this summer.

Looking at the Blackhawks organizational depth and needs, Kopecky is not a fit moving forward. Furthermore, the projected $1.8-2.5M cap number he stands to make should be allocated to other places.

Added to the likelihood that Kopecky will cost too much is the reality that coaches in Chicago have regularly showed a willingness to use him in a manner that does not suit his abilities or the team best; Kopecky is, at best, a third line forward who was used as a top-six player too often by Joel Quenneville.

Stan Bowman would be doing himself and Quenneville a favor if he removes the temptation to skate Kopecky with his homeboy, Marian Hossa. Let someone else overpay him for his career year and Stanley Cup Finals experience, and clear a forward spot for someone like Ben Smith for a full season.