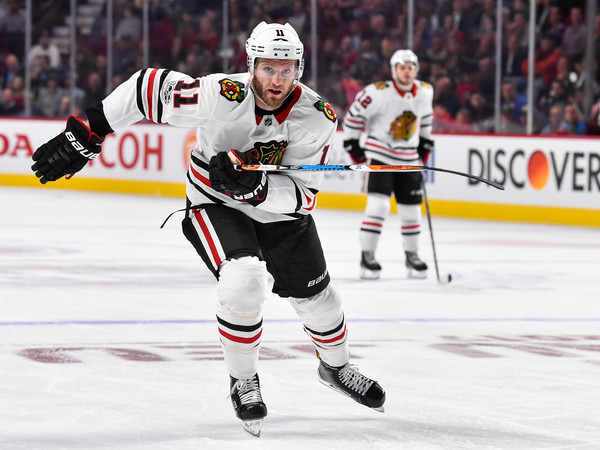 Not everything has been pretty early in the 2017-18 season for the Blackhawks, but they appear to be finding the right mix on the blue line with Cody Franson in the lineup.

Franson, 30, had a few suitors late in the summer but opted to sign a preseason PTO with the Hawks under the assumption he would get a contract once Marian Hossa was placed on LTIR. He signed a one-year deal with a $1M cap hit on the first day of the regular season.

As coach Joel Quenneville got a feel for the eight defensemen the Blackhawks carried out of camp, Gustav Forsling saw more action than Franson in October. Franson appeared in only three games in the season’s first month, and skated more than 17 minutes in only one of those contests.

But since Forsling went down with an upper-body injury, Franson has taken advantage of his opportunity.

Franson has now appeared in five of the Blackhawks 14 games this season. In those games, the Hawks have allowed only eight goals – and six of those came in a blowout loss in Colorado on Oct. 28. Chicago allowed one goal in each of Franson’s first two games and he has been in the lineup in the last two shutout wins, most recently in Minnesota where Franson skated a season-high 21:56.

He has pitched in with three assists, two of which have come on the power play. Franson has also been credited with five hits and three blocked shots thus far. But perhaps most importantly, Franson leads the Blackhawks with a 55.24 even strength SAT% to date.

Against Minnesota, Franson skated 16:16 at even strength with Duncan Keith; Jan Rutta spent most of his 5-on-5 time (9:21) with Brent Seabrook.

Franson and Keith spent most of the night in Minnesota against Eric Staal, Luke Kunin and Nino Niederreiter, skating more than seven minutes against each of them. The CORSI For % while Franson was with Keith was 72.41 against the Wild, an impressive number against a strong division rival.

As the Blackhawks look to rebound from a rough stretch to close out October, it looks more and more like Franson will be a key part of Chicago building on their recent success.