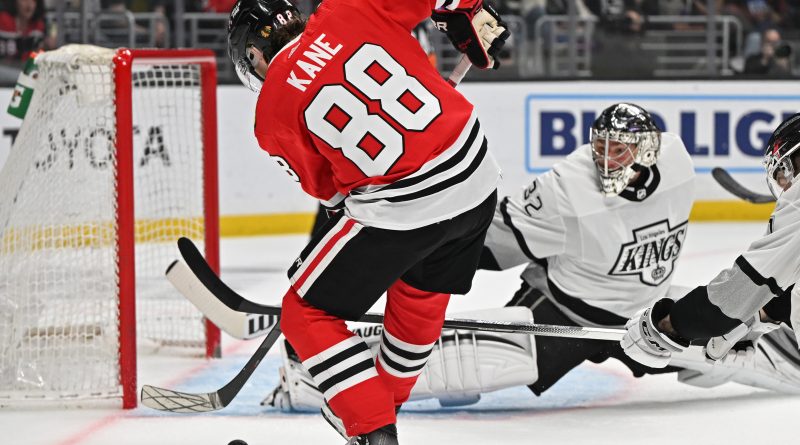 You know what’s awesome? A 9 PM CT start against a good LA Kings team that’s only available on ESPN+ or hulu with awful announcing and a fascinating guessing game when it comes to pronouncing players’ names.

And that’s what Blackhawks fans were treated to on Thursday night. The Kings came out in their home… whites with the chrome buckets so the Hawks were in their home red sweaters. It wouldn’t be a bad thing if the NHL went back to home teams wearing white back in the day every once in a while…

Anyways, the Hawks played a hockey game on Thursday night. It didn’t feel like they knew they had a game for about 17 minutes into the first period as the offense barely generated a stiff breeze. The Kings were dominating the puck and the scoring chances but Collin Delia was playing very well in his return to the NHL (even if ESPN’s crew couldn’t figure out how to say his last name).

But lively boards and a healthy bounce led to Patrick Kane giving the Hawks a 1-0 lead.

When the dust settled after one period, the Kings had a 12-5 shot advantage. Kane’s goal at 16:44 was Chicago’s third shot on net in the game. Los Angeles trailing by one after that period was criminal, but that’s hockey sometimes.

Chicago got a power play early in the second period and the hockey gods paid the Kings back for their strong first period. Trevor Moore scored a short-handed goal just 11 seconds into the Blackhawks “advantage” to tie the game.

The Blackhawks were able to generate more offense in the middle stages of the second period and were able to get the lead back ten minutes after the Moore goal. This time, it was Dylan Strome setting up Alex DeBrincat for his 36th of the season.

But, again, we aren’t allowed to have nice things this year. A too many men penalty a couple minutes after the DeBrincat goal led to another tying goal from LA. This one came from Phillip Danault, his 20th of the season and another reminder that Stan Bowman sucked at his job more times than not.

The Kings are supposedly a good team this year and appear to be headed to the postseason but they couldn’t get out of their own way in this game. The score was tied for only 79 seconds before Taylor Raddysh set up Sam Lafferty who actually finished a scoring chance for once and Chicago had a 3-2 lead.

The Kings out-shot the Blackhawks 19-11 in the second period and both teams scored twice. So the Hawks took the same one-goal lead to the room for the second intermission. Delia was good and the Hawks’ offense had a pulse in the second. 31 shots against in 40 minutes isn’t good, but both teams were credited with eight high danger chances. So at least the Hawks were making their chances good ones? Baby steps, people…

It took nine minutes for either side to score in the third period, but it was Danault tying the game once again. His career-high 21st goal of the season was scored from right in front of Delia because nobody apparently wanted to check the guy standing five feet in front of the net.

The Danault goal held up through the end of regulation and we headed to over time. Neither team sored in the extra five minutes, so we got a skills competition in which DeBrincat was the only one of the six skaters to score. And the Chicago Blackhawks stole a win from the LA Kings.

Delia was marvelous, stopping 43 of 46 to earn the win.

Raddysh was credited with five hits and three shots on net with one assist in 16:16.