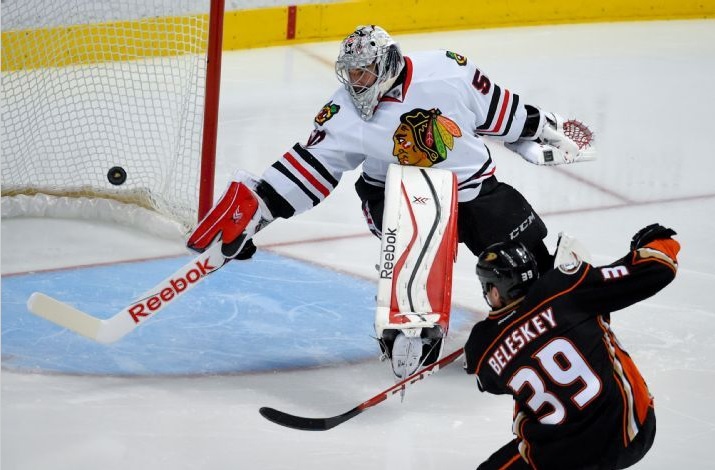 The game’s first period was one of the worst we’ve seen in a long time from the Blackhawks, who put only three shots on net and didn’t generate anything offensively. Cam Fowler started the barrage with his fourth of the playoffs at 5:10 into the opening period, and Ryan Kesler extended the lead to 2-0 only 32 seconds later.

When Sami Vatanen made the lead 3-0, many fans watching in Chicago gave up hope. Every aspect of the first 20 minutes was dominated by the Ducks, and Chicago looked to be done.

But the second period opened with a different Hawks team on the ice. Coach Joel Quenneville mixed up his top two lines, but it was the third that get the scoring started as Teuvo Teravainen launched a missile that slipped through Frederik Andersen only 71 seconds into the period to get Chicago on the board.

Teravainen again factored into the offense as the third line made an impact again in the final minute of the second period. He found Brent Seabrook wide open and the Hawks defensemen put a tough angle shot past Andersen with 25 seconds left in the period to cut the lead to just one.

Chicago went to the dressing room with momentum after out-shooting the Ducks and handling the puck for most of the second; it was a night-and-day difference from the first.

The third began with the Hawks again controlling the puck but they failed to convert. When Patrick Sharp failed to clear the puck with just over five minutes left in regulation, the Ducks made the Hawks pay once again. Ryan Getzlaf made a good pass to a wide open Vatanen, who found a wide open Patrick Maroon by the side of the net. The goal felt like a back-breaking score; the Ducks hadn’t done much offensively since the first period ended.

But in the final two minutes, Jonathan Toews refused to let the game end that easily.

With Corey Crawford on the bench for the extra attacker, Toews drilled a one-timer past Andersen at 18:10 to cut the lead back to one.

After the Ducks iced the puck, Crawford returned to the bench and Chicago went back to work. This time, Toews shot the puck from the goal line to Andersen’s right and banked the shot in off Anaheim’s goaltender to tie the game with only 38 second left on the clock.

The game headed to overtime with everyone in the building stunned, and the Hawks feeling the momentum.

But 40 seconds into the overtime, as his linemates went for a change, Bryan Bickell failed to get the puck deep and it killed the Blackhawks. Ryan Kesler led a 2-on-1 break and put a hard shot off Crawford that bounced directly to Matt Beleskey in front. Beleskey’s shot was on point, and the game was over less than one minute into the extra session.

For the first time in five overtimes in this postseason, the Hawks failed to win in extra hockey.

Bickell led the Hawks with five hits in 14:37 but did nothing else to contibute in the game. A critical error on his first shift in overtime handed the series lead to Anaheim as the series comes back to Chicago.

Toews finished winning nine of 18 faceoffs and with two goals in the final 1:50. Patrick Sharp led the team with six shots on net and added two assists and two hits to his ledger on the third line that was so effective in the second and third periods. Antoine Vermette was the busiest Blackhawks center at the dot, winning eight of 23 faceoffs. Vermette also picked up an assist and two hits in the game.

Teravainen skated 16:03 and showed a growing confidence that makes his Game Three scratch even more painful.

Seabrook was the only Blackhawks player with more than one blocked shot (he was credited with two), and also had a two-point evening with an assist and his goal in the second period. He skated “only” 22:57 in the game as Chicago once again relied heavily on Duncan Keith and Niklas Hjalmarsson.

Keith skated 27:23 and picked up an assist, while Hjalmarsson skated 25:34 and blocked one shot with an assist as well. Kimmo Timonen looked old and lost again, finishing minus-two in only 8:06 on the ice.

In spite of allowing five goals, Crawford kept his team in the game with a number of big saves. He made 23 saves in the loss, but the last found Beleskey’s stick for the game-winner. Andersen made 24 saves in the win.

The Blackhawks will return home for a must-win Game Six at the United Center on Wednesday night.