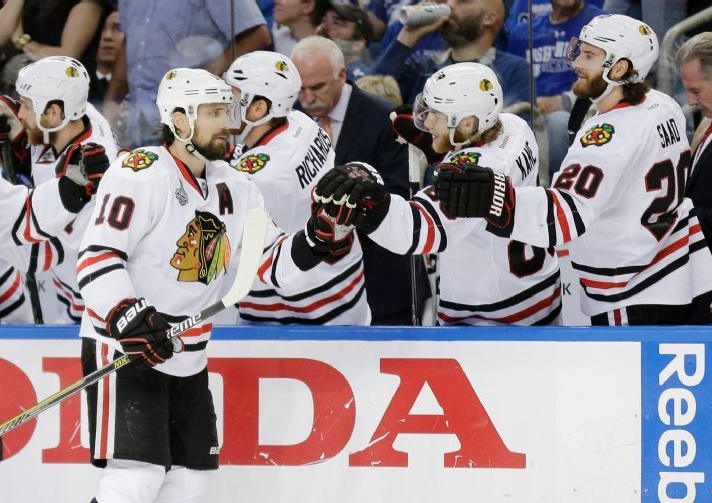 People will tell you Corey Crawford isn’t an elite goaltender. And there are times he makes you want to pull your hair out. But on Saturday night, Crawford was every bit of the Cup Champion netminder the Blackhawks needed in leading his team to a huge Game Five victory in Tampa.

After struggling in the first period in the Stanley Cup Final, the Blackhawks got off to a much better start. An early – and awful – turnover by Crawford almost gave Tampa an early 1-0 lead but he was able to recover and make a big save.

On the play, the recipient of Crawford’s mistake wound up injured. Nikita Kucherov drove hard to the net and crashed over Crawford and into the post shoulder/neck first. He labored to the bench and did not return to the game, taking a key member away from the Lightning’s touted “Triplets” line.

Moments after Crawford’s gaffe, it was Ben Bishop’s turn to make a terrible play on the puck.

Patrick Sharp’s fifth goal of the postseason was his first since Game Two of the Minnesota series, and gave the Blackhawks a 1-0 lead 6:11 into the game.

Tampa rallied well after the Sharp goal, but Chicago finished the first dominating the play.

The second period opened up and became a track meet once again, including one stretch of more than eight minutes without a whistle. In the middle of the period, a failed clearing attempt came back to bite the Hawks. Jason Garrison made a beautiful pass to Valtteri Filppula, who scored his fourth of the playoffs.

Only 32 seconds after the Filppula goal, Brandon Saad was sent to the penalty box for slashing. Chicago killed off the minor penalty, the only power play of the night for the Bolts, and the second period came to a close with the game tied.

And for the fifth time in as many Cup Final games, this one would be decided by one goal.

Kris Versteeg had a great, energetic night once again and led a charge up the ice early in the third. Versteeg, who led Chicago with four shots on net in the game, put the puck on net and Bishop kicked it out front, where Antoine Vermette was waiting.

Vermette’s fourth of the playoffs became his third game-winning goal of the playoffs as Crawford and the Hawks were able to hang on against a resilient Lighting charge in the third. Vermette is the first player in Blackhawks history to have two game-winning goals in a Stanley Cup Final, making the trade Stan Bowman made to acquire him at the deadline incredibly valuable.

Andrew Shaw, Marcus Kruger and Andrew Desjardins played another strong game. Shaw led Chicago with five hits in more than 15 minutes of ice time, and Kruger was credited with one blocked shot, two takeaways and won five of nine faceoffs in the game. Desjardins, another of Bowman’s deadline acquisitions, put three shots on net and had one takeaway in another excellent effort.

Teuvo Teravainen skated 14:04 and picked up an assist on Sharp’s goal, making him the playoff point leader among rookies.

Jonathan Toews was also credited with an assist on Sharp’s goal and won 14 of 24 faceoffs in only 16:51 on the ice. Coach Joel Quenneville truly rolled all four lines in Game Five, with Toews being the ice time leader among Hawks forward; ironically, it was Vermette (12:15) who skated the lowest ice time in the game.

Vermette picked up one blocked shot and two takeaways with his game-winner. He also won eight of 11 faceoffs in the game.

Patrick Kane was once again held off the scoresheet by Victor Hedman and the Lightning, putting two shots on net in 15:48.

Niklas Hjalmarsson was once again a rock on the blue line for Quenneville, leading the game with seven blocked shots in 28:19. Duncan Keith blocked four shots in a game-high 29:23. Brent Seabrook picked up two hits, two blocked shots and one takeaway in 22:57, and Johnny Oduya matched Seabrook’s box score in 24:19.

Trevor van Riemsdyk skated 8:01 in the game but made a big play to clear a bouncing puck out from in front of the net in the third period. Kimmo Timonen got eight shifts (5:05) in the game.

On Monday night at the United Center, the Blackhawks will have a chance to raise the Stanley Cup at home for the first time in 77 years.