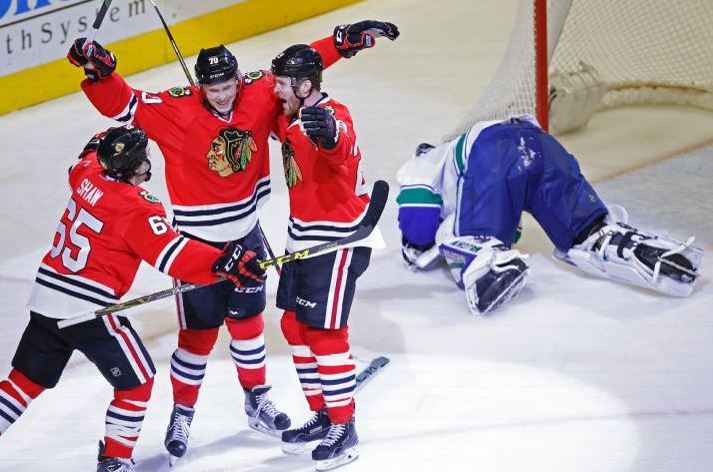 It took less than 12 minutes for the Blackhawks to accomplish two significant pieces of business on Sunday night.

Those events happened at 11:51 into the opening period as both Kane and Keith stayed red hot and the Hawks stormed out to a 1-0 lead. From there, it was all about Corey Crawford.

Back-to-back shutouts? Why not!

Crawford stopped 30 saves and helped kill all three Vancouver power plays on the night to earn a second consecutive shutout against a Western Conference opponent. Crawford had an exceptional week, posting a 4-0-0 record with a .984 save percentage.

In front of Crawford, the Hawks added three insurance goals in the third period to blow the Canucks away. Rookie Dennis Rasmussen continues to impress, scoring his second goal after being recalled. He later added an assist on a goal from… wait for it… Brandon Mashinter with 10 seconds left in regulation. Rasmussen won five of eight faceoffs and was credited with one hit and one blocked shot in 9:56 on the ice.

Andrew Shaw added a goal between Rasmussen and Mashinter; his fifth of the season came with 31 seconds left in regulation. He finished the night tied for the team lead with three hits; Bryan Bickell, who picked up an assist on Rasmussen’s goal, also had three hits on the night.

Jonathan Toews quietly won 12 of 15 faceoffs while Marcus Kruger won 11 of 16 in the victory.

Chicago dominated every area of the game except the hits category, which matters because hits lead to wins, right? Vancouver out-hit the Hawks 35-16 in the game.

The Blackhawks have won four of their last five, and have outscored their opponents in those four wins 13-2. What’s more, the Hawks have allowed only three power play goals in seven games in December, two of which came in their overtime loss in Ottawa.