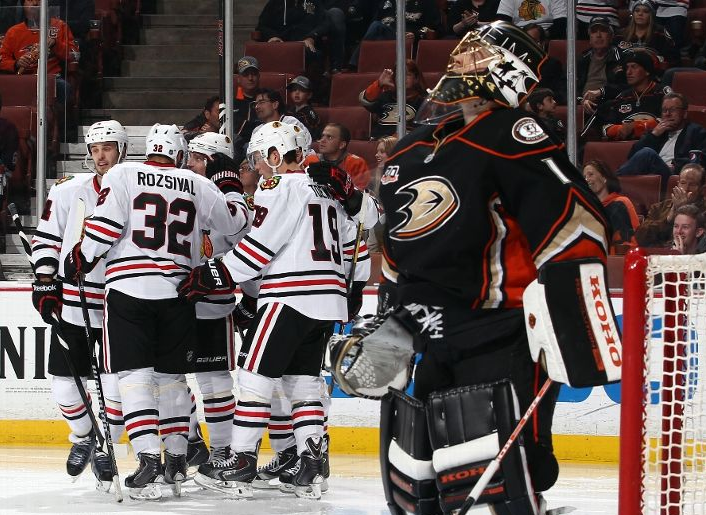 The Blackhawks followed an impressive offensive performance in Los Angeles on Monday night with a stellar defensive effort against the top team in the Western Conference to earn two points in Anaheim on Wednesday evening. Corey Crawford completed a strong shutout performance, stopping all 29 shots the Ducks put on net. He was especially impressive during the five penalties the Hawks successfully killed; 40 seconds of 5-on-3 play in the first period was highlighted by a couple great stops by Chicago’s netminder.

Marian Hossa scored his 24th of the season – the eventual game-winner – only 39 seconds into the second period. As Jonathan Toews attacked the net, Hossa showed great patience and crossed the crease with the puck and allowed Anaheim goalie Jonas Hiller to take himself out of position before putting the puck into the net.

Toews added an insurance goal – his 19th of the season – late in the third period. Hossa was credited with the only assist on Toews’ goal.

In previous games his year, the Hawks had tried to match up Marcus Kruger’s line against the Ducks’ top line with Ryan Getzlaf and Corey Perry. But in Anaheim, the Ducks put their top line out against the Toews line and Chicago’s best performed well. Not only did Hossa and Toews scored the game’s only two goals (with an assist for Sharp), but Perry and Getzlaf combined for nine unsuccessful shots on net. Getzlaf won only 10 of 21 faceoffs as well.

At one point, Leddy broke up a rush by Anaheim forward Teemu Selanne. When Selanne made his NHL debut with the Winnipeg Jets in the fall of 1992, Leddy was five months short of his second birthday.

Led by Hjalmarsson and Rozsival, the Hawks blocked 21 shots in the game. Chicago also rebounded nicely in the faceoff circle after getting thoroughly dominated by the Kings earlier in the week. The Hawks won 32 of 59 faceoffs in the game, led by Toews winning 11 of 20 and Ben Smith winning five of seven.

Chicago’s penalty kill resurrection continued on Wednesday night. Since the beginning of the new calendar year, the Hawks have killed 45 of 50 penalties (90 percent), and have climbed to 25th in the NHL for the season.

In spite of a much better performance, Bryan Bickell once again finished with the lowest ice time on the roster. Bickell was credited with two hits in only 9:06, but appeared to have regained some of the confidence that he had lacked since returning from injury.

The Blackhawks’ final game before the Olympic break is Friday night against the Coyotes.