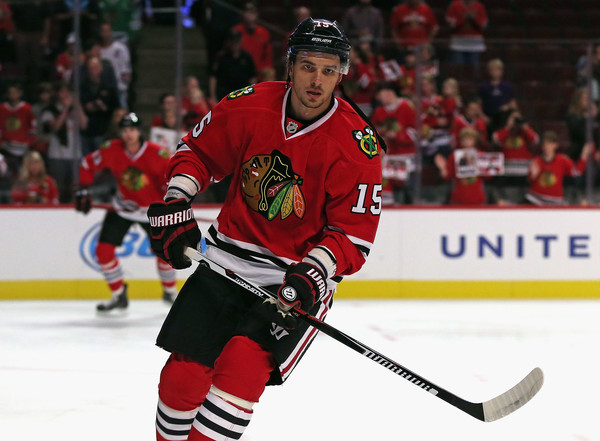 Chicago started the night honoring Marian Hossa’s 500th career goal. Then they went to work on the Los Angeles Kings.

Vince Hinostroza returned to the lineup in place of Ryan Hartman and Michal Rozsival skated in place of Gustav Forsling again. But it was the Hawks’ big guns that led the way to an early lead.

Jonathan Toews didn’t want to enter November without a goal on his stat sheet, and scored his first on a power play early to give the Hawks a 1-0 lead.

The Hawks had three more power plays in the first period, including a double-minor on Derek Forbort, but failed to capitalize again. Chicago out-shot LA 11-8 in the opening 20 minutes and took a lead to the room.

Mid-way through the second period, the new-look second line went to work. Artemi Panarin set up Marian Hossa, who drove the net and found Artem Anisimov on the doorstep.

The goal extended red-hot Anisimov’s point streak to seven games and extended the Hawks’ lead to two. Perhaps most importantly, the Hawks killed 1:43 of penalty time with Toews in the box to end the second. They finished the penalty kill to open the third.

Chicago was called for too many men at 7:17 into the third but “only” had to kill 1:23 before Nic Dowd did them a favor and went to the box for holding Hossa’s stick. The Blackhawks didn’t capitalize on the brief power play after Panarin left the box from serving the bench minor, but the Hawks kept the pressure on.

With three minutes left in regulation, Corey Crawford lost his stick and made a flurry of huge saves and deflections while Brian Campbell tried to get his stick back to him. Chicago was able to hold LA off the board and the Kings were once again short-handed with 2:14 left in the game, trailing by two as Kyle Clifford got caught high-sticking Campbell.

Appropriately, Hossa finished the night with a power play goal into an empty net with 70 seconds left in regulation. Toews and Duncan Keith picked up the assists on Hossa’s 502nd career regular season goal.

Crawford was spectacular, stopping 32 in the shutout victory. But the Hawks played with intensity and speed in front of him all night. Peter Budaj had a very good night to keep the Kings in the game, making 26 saves in the loss.

Campbell (two assists), Toews (one goal, one assist) and Hossa (one goal, one assist) led the way for Chicago offensively. Toews also won 12 of 18 faceoffs, while Anisimov won seven of 16 at the dot. Rozsival finished tied with Richard Panik for the team lead with three hits and tied with Brent Seabrook for the team lead with two blocked shots on the night.

[Editor’s Note: there was no game recap on Friday night because I took my mother to a baseball game.]