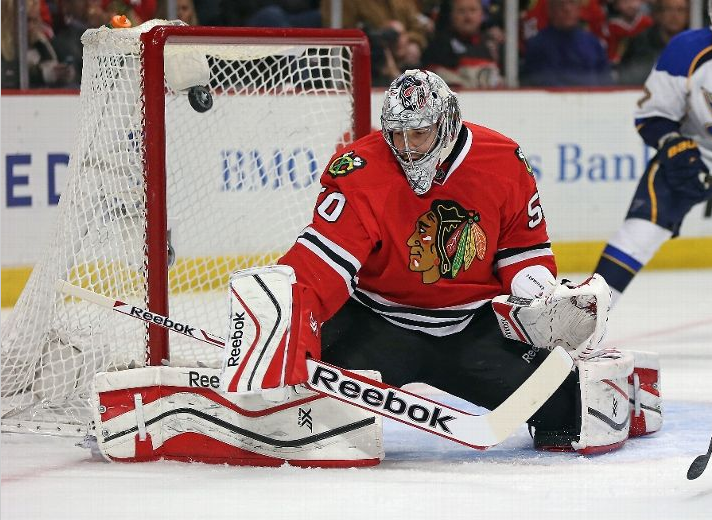 It took another great performance from Corey Crawford to get through the first 40 minutes tied, but the championship mettle of the Chicago Blackhawks showed up in the third period.

When the dust settled and the final horn sounded, the Hawks had scored four times in the final 20 minutes and St. Louis is headed to the golf courses.

Crawford faced 17 shots in the second period alone as the skaters in front of him were called for four penalties (including a double-minor on Marian Hossa). He allowed only one goal – to TJ Oshie late in the first period – while facing 36 shots in the game to earn the critical knockout blow.

In the series, Crawford saved 201 of 215 shots on net – a .935 save percentage. For those that have continued to doubt Crawford in spite of his 2013 postseason performance, this series should serve notice that he’s a big-time goaltender.

The Hawks penalty kill – which was supposedly the Achilles heel of this team earlier in the year – successfully handled six short-handed situations on Sunday to complete a remarkably dominant series. Chicago killed 27 of 29 penalties in the series; St. Louis finished the regular season ranked seventh in the NHL on the power play.

Bryan Bickell got Chicago on the board, redirected a Brent Seabrook shot past Ryan Miller early in the first period. The Hawks wouldn’t generate much more offense in the first two periods, but Crawford’s play kept them in it.

Jonathan Toews scored his third game-winning goal of the series only 44 seconds into the third period, a power play goal that opened the flood gates for Chicago’s offense. Patrick Sharp scored his first of the series after getting whacked in the face less than 90 seconds later, and Andrew Shaw redirected a Duncan Keith shot home to make the score 4-1 at 7:30 into the final frame.

For good measure, Keith scored his second of the series at 17:05 to make the final score 5-1 in favor of the defending champions. Keith was also credited with three assists and one blocked shot in over 25 minutes.

In his return from suspension, Seabrook skated 22:05 and was credited with two assists. He finished the series with six points in three games.

Marcus Kruger spent four minutes in the penalty box early in the game but still led the team with five blocked shots. He skated 3:41 short-handed after serving two minor penalties in the game.

Michal Handzus skated 6:39 short-handed (10:33 total) in the game and blocked three shots. Bickell was credited with a team-leading six shots on net and team-high four hits in the victory as well.

So with only 10 forwards playing most of the game, the Hawks overcame six penalties and eliminated their rivals from St. Louis.

Now, the Hawks have to wait to see if Colorado will finish off their series with Minnesota in six games or if it will take a seventh game to determine the next round opponent.