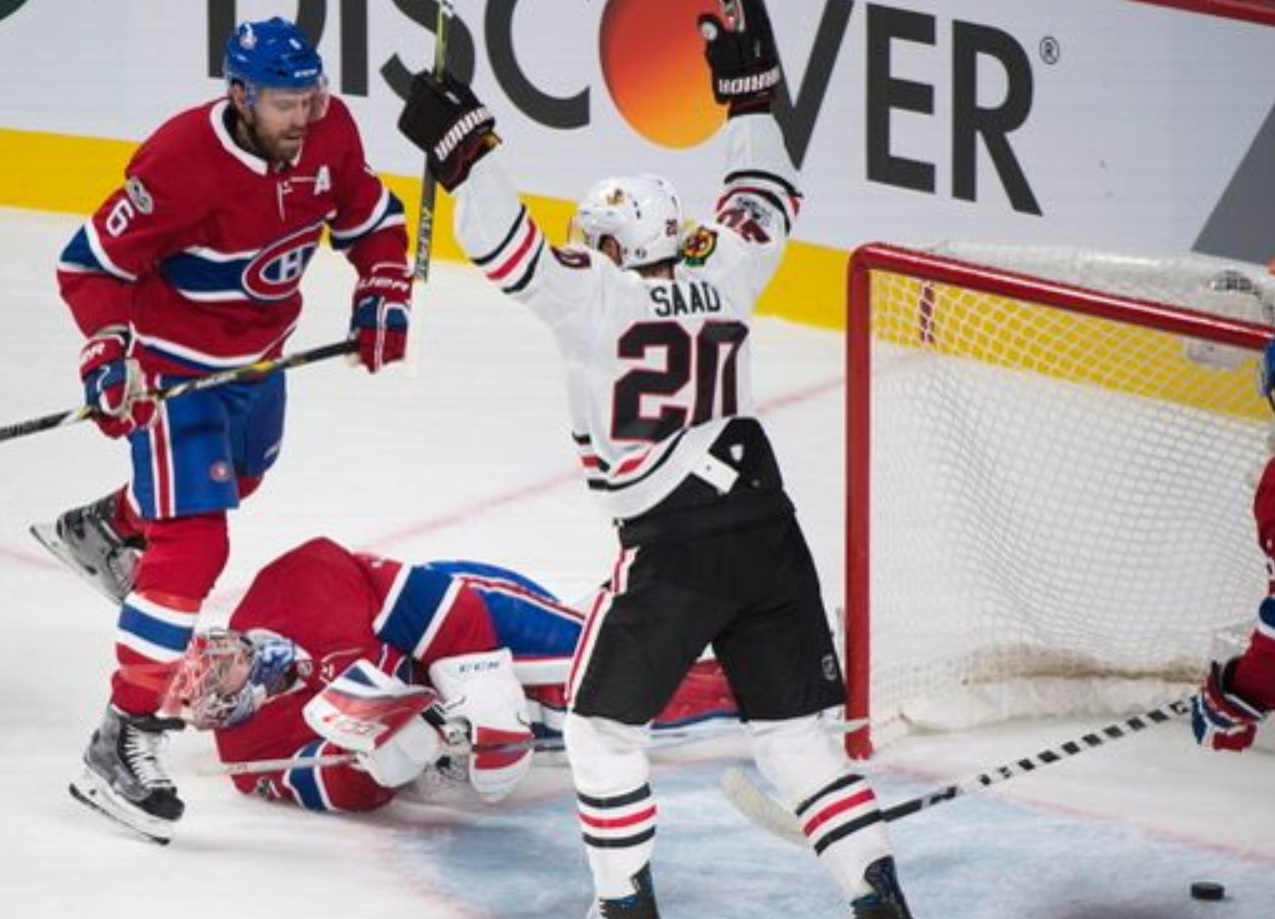 After getting completely outplayed over the final 40 minutes of regulation and overtime in Toronto on Monday night, the Blackhawks made a couple lineup changes. Corey Crawford stepped back between the pipes to face his hometown Canadiens, and Cody Franson dressed for Connor Murphy.

Unfortunately, the first 15 minutes of regulation in Montreal felt a lot like the final 45 in Toronto. The Habs dominated the Hawks up and down the ice and a Tomas Plekanec goal 75 seconds into the game gave the home team a 1-0 lead early.

Franson went to the box at 5:28 for tripping and was joined by John Hayden 85 seconds later. Chicago was able to kill off both penalties and the brief two-man advantage, but continued to struggle to put any kind of sustained pressure together.

At 17:53 into the first, Patrick Sharp set up Alex DeBrincat and the young sniper scored his first career NHL goal.

The celebration was short-lived, however. Brandon Saad continued his red-hot start to the season, scoring his fifth of the year 19 seconds later. Jonathan Toews and Richard Panik picked up the assists on the Saad goal as the new-look top line continues to pile up points.

When the dust settled from the first 20 minutes, the Habs held a 16-7 shot advantage but the Hawks had a 2-1 lead on the scoreboard.

At 10:44 into the second, DeBrincat picked up his second point of the night with an assist on a power play goal for Artem Anisimov to extend the Chicago lead to 3-1.

Franson picked up his first point in the Indian head sweater on the play as well.

However, the Blackhawks had to kill two more penalties in the second period – including a second from Franson. Gustav Forsling had a rough first two periods and also went to the box in the second, but Chicago stayed perfect against four short-handed situations.

The Blackhawks out-shot the Canadiens 12-10 in the second and carried a two-goal lead to the third.

Montreal dominated the third period again, but Crawford simply refused to allow another goal. The Habs outshot the Hawks 16-6 in the final period and 42-25 in the game, but Crawford stood on his head and Chicago escaped with a 3-1 victory.

Toews won 16 of 30 faceoffs to lead the Blackhawks and continued his point streak to open the season with an assist. He was also credited three shots on net and one takeaway in the game.

Tanner Kero was credited with only one blocked shot but had a terrific defensive night. He won six of 13 faceoffs and was credited with two hits and one takeaway while taking away passing and shooting lanes throughout the night.

Panik, Hayden and Michal Kempny led Chicago with three hits each. After a couple bad turnovers in the first period – including one that led to the Plekanec goal – Ryan Hartman was limited to 15 shifts and 8:46 on the ice. He tried to set up Patrick Kane for an empty net goal late in regulation but Plekanec was able to tip Kane’s shot out of the air and redirect it away from the net.

Chicago was perfect against five Montreal power plays in the game.