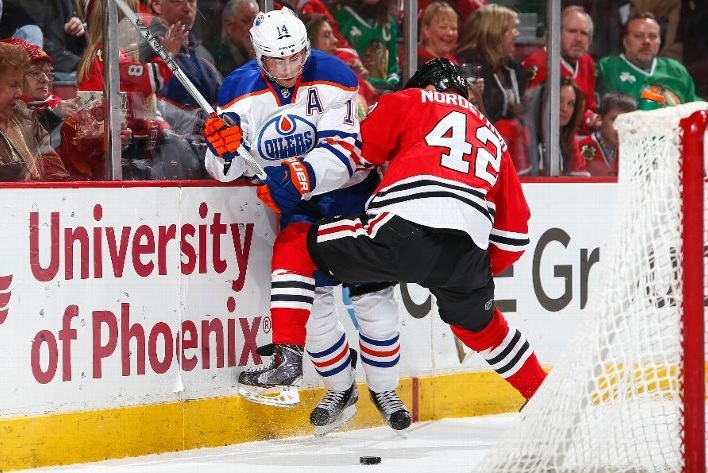 Andrew Desjardins made his Blackhawks debut on Friday night, but it was Corey Crawford keeping his team in the game long enough to have another new guy win it in a shootout. The Blackhawks trailed 1-0 after 20 minutes, but were fortunate to be down only one after getting out-hustled and outworked by the visiting Oilers. Edmonton out-shot the Hawks 18-12 in the first period and had a number of great scoring chances; if not for Crawford, the deficit could have easily been two or three.

An improved second period saw the shot totals closer (12-11 in favor of the Hawks) but neither team was able to score. The Blackhawks did fail on a power play in each of the first two periods, and continued to hang around because Crawford was up to the task.

Finally, Edmonton netminder Ben Scrivens had to deal with traffic in front late in the third period and it paid off. Brent Seabrook unloaded from the blue line and Scrivens didn’t see it coming because of a screen provided by one of his teammates. Seabrook’s eighth of the season tied the game at 13:58 and the game would head to overtime.

In the game’s opening 60 minutes, Edmonton put 43 shots on net but were only able to beat Crawford once. Chicago allowed four more shots in the overtime period, forcing their netminder to make 46 saves to force a shootout.

Only one player on either roster scored in the shootout, and it was Antoine Vermette. In his second game with the Hawks, Vermette picked up the important second point of the night by beating Scrivens in the third round of the skills competition.

Vermette played better in his second game, and we started to see more balance from coach Joel Quenneville’s lines. Jonathan Toews won 11 of 17 faceoffs in 19:30, and Vermette won 11 of 19 at the dot in 18:40 before his shootout winner. As a team, the Hawks won 38 of 62 faceoffs against the cellar-dwelling Oilers.

Toews picked up the primary assist on Seabrook’s goal, once again propping up the offense with Patrick Kane out of the lineup. Chicago’s captain has three goals and two assists in four games sine Kane got hurt.

Seabrook had a big night in the box score, adding three blocked shots, two hits and a team-high three takeaways to his game-tying goal. Joakim Nordstrom led the Hawks with eight hits and Desjardins added seven in regulation; not surprisingly, neither got on the ice in the extra five minutes.

16 thoughts on “Corey Crawford, Blackhawks Hang On Against Oilers”