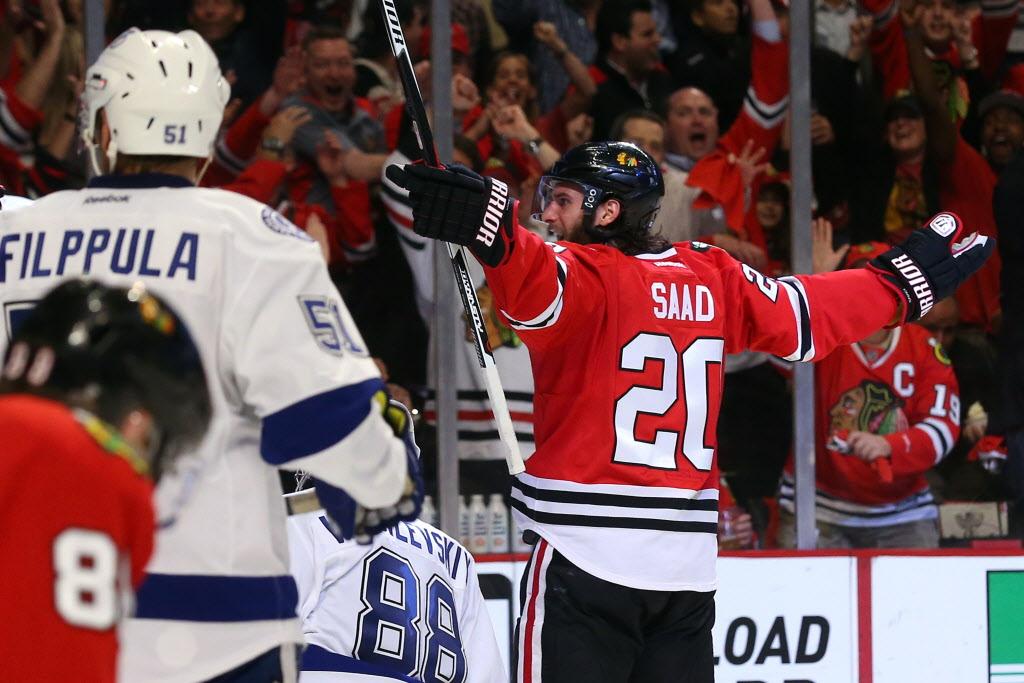 A few heartbeats may have been skipped in the final minute of regulation, but Corey Crawford and the Blackhawks held on to tie the Stanley Cup Final with a huge 2-1 win at the United Center.

With Tampa starting 20-year-old goaltender Andrei Vasilevskiy, the plan was obviously to test the youngster early. The Blackhawks failed to accomplish that, putting only two shots on net in the opening 20 minutes of play.

Coach Joel Quenneville threw his lines in a blender from the get-go for the must-win game. Andrew Shaw started the game with Brandon Saad and Patrick Kane, and Patrick Sharp bumped up to the top line with Jonathan Toews and Marian Hossa. The new-look lines didn’t show any consistency early, and missed passes became turnovers on too many occasions. But strong shot blocking and good rebound control by Crawford kept the scored knotted at zero.

Chicago opened the second period with a minute of power play time, and started to find some offensive momentum. In perhaps the least surprising news of the night, a strong shift by Toews and Hossa created an opportunity and the Blackhawks’ captain scored the first goal of the game. It was Toews’ tenth of the playoffs, with the assists going to Sharp and Hossa.

Unlike Game Three, the Hawks held the lead for more than 13 seconds on Wednesday night. In fact, they held it for 5:07… until Valtteri Filppula made a great pass against the grain from behind the net to Alex Killorn, who scored his ninth of the postseason to bring the score even at one.

The Hawks successfully killed four Tampa power plays in the first two periods, which was especially impressive considering Brent Seabrook was in the box for two of them and Toews was in for a third. But the Blackhawks defense was on point all night, and extended into the third period.

After failing to register a point in the first three games of the series, Kane finally got into the swing of things with an assist on Saad’s game-winning goal at 6:22 into the third.

In the 13-plus minutes that followed, the Blackhawks did everything they could to block and clear pucks and Crawford played his best period of the series to preserve the victory.

Crawford finished the night with 24 saves against 25 shots, while Vasilevskiy faced only 19 shots in defeat.

We now know there will be one more game at the United Center. We do not know which team will be playing to hoist the Cup on Monday night. That will be decided in Tampa on Saturday, when the teams are back on the ice for Game Five.

94 thoughts on “Corey Crawford, Blackhawks Hang On To Tie Series”