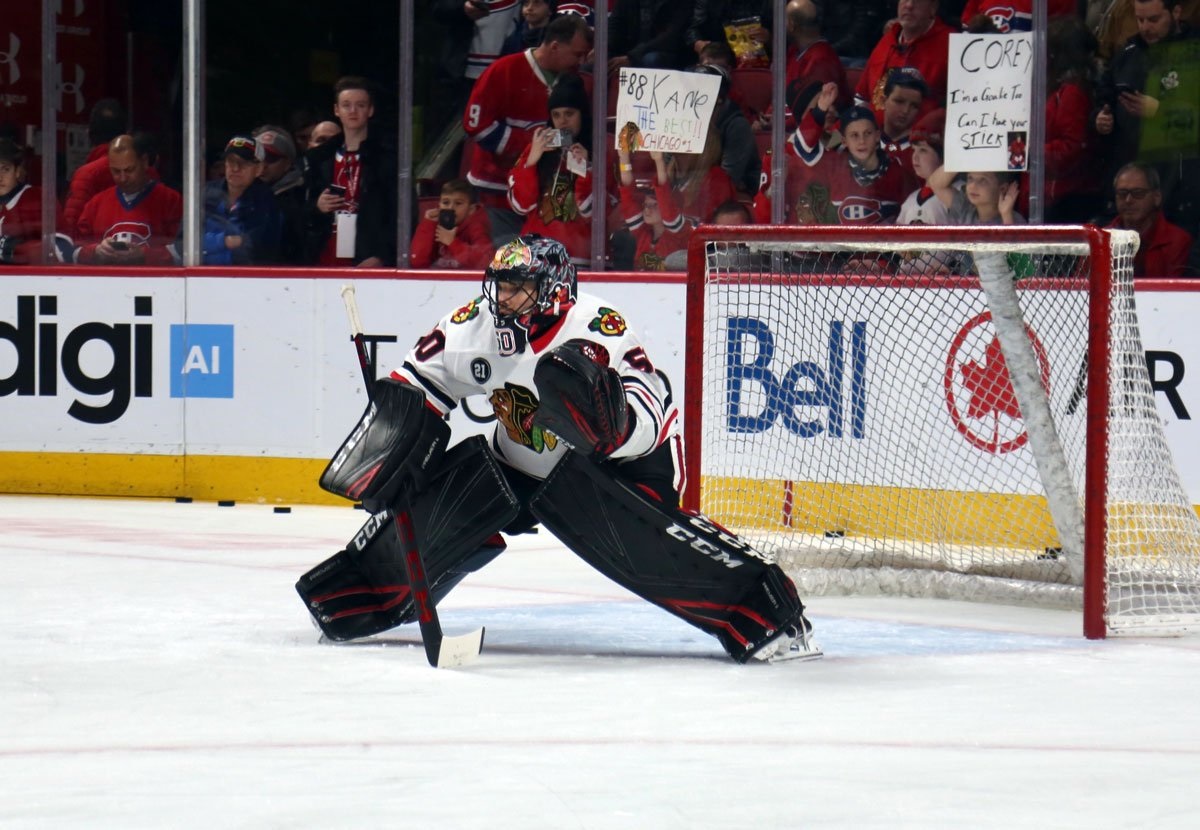 The Blackhawks ventured into Montreal on Saturday night for another Original Six matchup. Corey Crawford, who left the game in Toronto because he was sick, was between the pipes in his home town and said he was ready to play.

In the second, Montreal continued to get the better chances – and Crawford continued to play exceptionally well. Three minutes into the second Connor Murphy attacked in the offensive zone and Dylan Strome set him up perfectly.

Murphy’s fourth of the year came with assists from Strome and Alex DeBrincat and gave the Blackhawks a 1-0 lead. Chicago held onto that lead through the second period despite being out-shot 17-8. Crawford made a number of incredible stops and dealt with a lot of traffic, but looked comfortable.

Jonathan Toews went to the box for the second time in the game only 36 seconds into the third period but the Hawks successfully killed the penalty. Chicago’s penalty kill was good against Montreal’s advantage four times already at that point in the game.

At 4:49 into the third DeBrincat set up Chicago’s hottest sniper, Brendan Perlini, and he slammed home yet another goal.

Slater Koekkoek was credited with the second assist on Perlini’s 13th of the season. The goal is Perlini’s eighth in seven games in March.

Crawford continued to absolutely steal the show. Big time save after big time save against a flurry of Canadiens opportunities kept the Hawks up two deep into the third period. And, importantly, Chicago stayed out of the box after the Toews penalty.

With 3:15 left in regulation Shea Weber blew a tire and the Hawks got a 2-on-Price. Perlini and Dylan Sikura got too fancy and Perlini made one pass too many, allowing Carey Price the chance to make a save. Perlini should have let it rip; he’s as hot as anyone on the roster but tried to get the rookie on the board.

Montreal pulled Price with 2:30 left in regulation as they desperately tried to solve Crawford.

When the final horn sounded, Crawford made a career-high 48 saves to earn a remarkable shutout.

Toews won 15 of 23 faceoffs and led Chicago forwards with two hits and four penalty minutes. Patrick Kane was held without a point and put only two shots on net in 18:19.

Murphy led the team with four hits and finished tied with Koekkoek for the team lead with four blocked shots. Murphy (22:32) and Koekkoek (22:30) led all Blackhawks defensemen in ice time. The only other skater over 20 minutes was Duncan Keith (20:30).