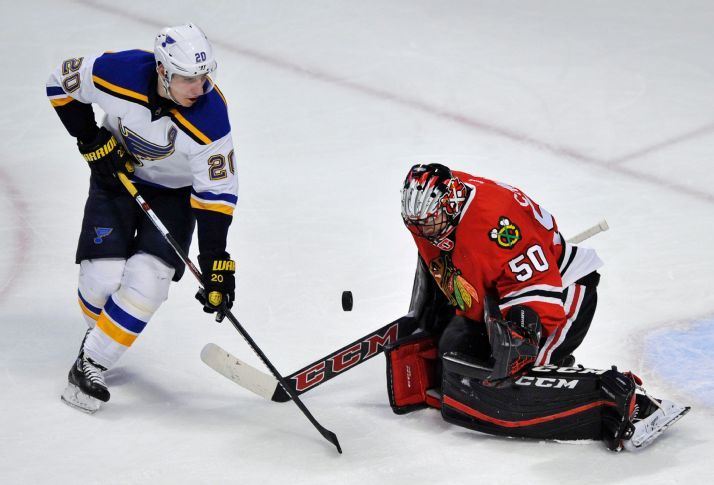 The opening 20 minutes felt awfully familiar, with the Blackhawks getting out-skated and outshot by the Blues. But, once again, Corey Crawford was up to the challenge and kept his team in the game.

Crawford faced 12 shots in the first period while the skaters in front of him put on six on the Blues’ net. He was good enough that the Hawks could pick up their game after seven consecutive underwhelming periods, and finally took it to the Blues.

In the second, the Hawks flipped the script and outshot the Blues 11-6. At 15:26, Patrick Kane found Artemi Panarin with a filthy backhand pass and Panarin buried his 17th of the season.

Both teams got a power play in the third, but only Chicago was able to convert their advantage.

A Marian Hossa blast got tipped by Andrew Shaw to beat Brian Elliott for the Hawks’ second goal of the night. Shaw was wearing a guard to protect his jaw during the game after he was hit in the face during Friday night’s loss to the Panthers. He lost two teeth and needed some stitches, but was able to return to a full workload against a division rival on Sunday night.

When the final horn sounded, Crawford had stopped all 25 shots he faced to complete his seventh shutout of the season. Niklas Hjalmarsson blocked a game-high seven shots in the victory to lead a Blackhawks effort that allowed only 13 shots to reach Crawford over the final 40 minutes after allowing 12 in the first period.

Jonathan Toews won 10 of 15 faceoffs in the game but his teammates got their butts kicked at the dot again. Artem Anisimov won seven of 21 and Phillip Danault five of 11 against a very good group of centers from St. Louis.

Brandon Mashinter played 7:42 and picked up four hits as Jiri Sekac was a healthy scratch. Andrew Desjardins led the way with five hits in the game.

The Hawks are in Carolina on Tuesday, and won’t play at the United Center again until Feb. 9 when they host the Dallas Stars.