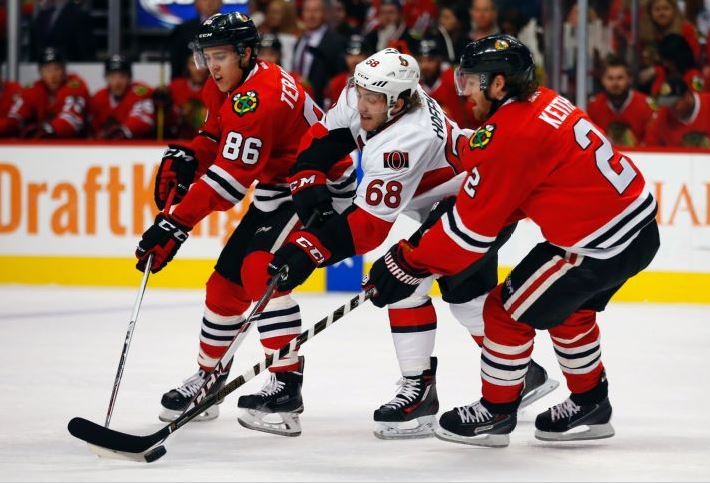 It was an intriguing Sunday for the Chicago Blackhawks, and a successful one for the team on the ice and their general manager.

Earlier on Sunday, the Hawks announced defenseman David Rundblad is headed to Europe. Stan Bowman didn’t immediately demote Rundblad after he cleared waivers, and the rumored departure for overseas became a reality hours before the team took the ice.

Bowman was then on the ice before the game started to present Patrick Kane with a gold puck and print in honor of his point streak. But it appears his mind was elsewhere when he posed for the photos with Kane.

During the second period of a game that did little to generate interest, the Hawks announced a trade: Chicago sent Jeremy Morin to Toronto for Richard Panik.

Lost in the excitement of the Hawks getting two players – Rundblad and Morin – out of the organization on the same day was a solid home victory to open the new calendar year.

Corey Crawford extended his career high to six shutouts, stopping all 26 shots he faced. He faced a couple good scoring chances in the second period, but the skaters in front of him held the game to a relatively boring pace throughtout.

Duncan Keith scored the game-winning goal 8:13 into the second period, with assists going to Jonathan Toews and Andrew Desjardins. Keith added a team-high four blocked shots to his seventh goal of the season in 24:51 in the win. He and Niklas Hjalmarsson (22:56) were the only Blackhawks to skate more than 20 minutes on Sunday evening.

Desjardins continues to be a story over the last week. He added his fifth goal of the season into an empty net to seal the victory, and finished tied with Kane and Artemi Panarin for the team lead with four shots on net. Desjardins also blocked three shots and was credited with two hits in another solid game.

Since they were put together, the line of Desjardins with Teuvo Teravainen and Phillip Danault has been dynamite. Danault won only two of seven faceoffs but picked up an assist on Desjardins goal and was credited with two hits and one blocked shot.

Artem Anisimov also stayed hot, scoring his 15th of the season at 6:01 into the third. Kane and Michal Rozsival picked up assists on the goal, which was an easy tap-in of a rebound off a Rozsival shot. Rozsival and Marian Hossa led the way with four hits each as well.

Erik Gustafsson, once again working next to Brent Seabrook most of the night, looked good again as well. He blocked three shots and was credited with one hit in 16:44, which was the lowest ice time among Hawks defensemen in the game.

Chicago is back on the ice in Pittsburgh on Tuesday night.