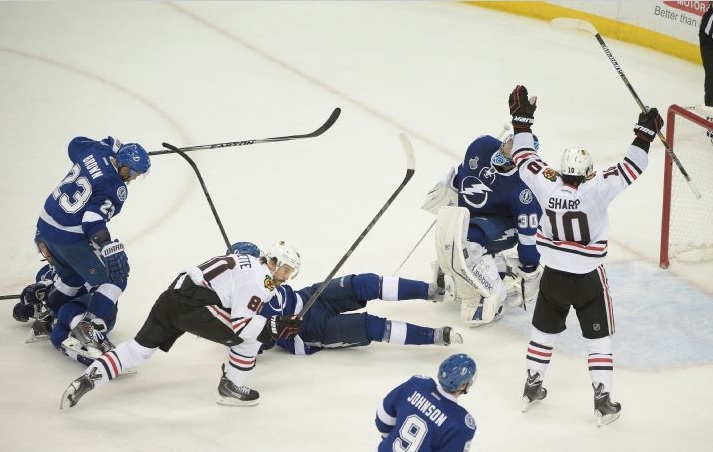 The 2015 Stanley Cup Final didn’t get off to a great start for the Blackhawks, but championship perseverance once again came to the forefront and Chicago stole home ice with a resounding Game One victory.

Tampa came out flying, showing their excitement for hosting the first game of the Cup Final. The Lightning won better than 70 percent of the faceoffs in the first period, and a ridiculous redirect by Alex Killorn provided an early 1-0 lead.

The Bolts out-shot the Hawks 10-7 in the first period and their defensemen – all seven who dressed – were active from the opening puck drop. If not for a number of good saves by Corey Crawford, the deficit could have easily been more than one when the opening 20 minutes came to a close.

Chicago had a stronger second period that included two power plays; the first advantage included better puck movement, but the second was bad. The Blackhawks were out-shot again in the second (8-6), but Crawford kept the score 1-0 with two big saves against Steven Stamkos.

In the third, Tampa came out and was noticeably less aggressive. Their defensive posture played into the Hawks’ hands, and coach Joel Quenneville was able to once again master the match-ups. After a big save on a Ryan Callahan breakaway – Tampa’s first shot of the third period – the Hawks offense was finally able to break through.

And it was the Hawks two scratches from Game Three of the Western Conference Final who changed the game.

Teuvo Teravainen rifled a shot past Ben Bishop, who was screened well by Marcus Kruger, to tie the game at 13:28.

Less than two minutes later, Teravainen stole the puck and found Antoine Vermette in front of the net. Vermette scored the eventual game-winning goal at 15:26 and the air left the building in Tampa.

When the dust settled, Chicago had come back and won most aspects of the game over the final 40 minutes. The Hawks won 27 of 57 faceoffs in the game, Crawford was a stone wall after the Killorn goal, and Chicago’s top four defensemen once again proved to be the best in the game.

Kris Versteeg skated in place of a banged-up Bryan Bickell and the new dad brought a lot of energy. With the exception of an interference penalty (on which he appeared to be pushed and went face-first into the post), he had a strong game pursuing the puck in every zone. Versteeg 9:32 with one hit and one takeaway after starting on the line with Brad Richards and Marian Hossa.

The Hawks third line did all of the offensive damage. Vermette won six of 11 faceoffs and Teravainen had two points – adding the primary assist on Vermette’s goal with his game-tying goal – to bring a ton of energy to the third period. Patrick Sharp added four hits and one blocked shot in the game as well.

Brent Seabrook had seven of the Hawks 21 hits in the game and was credited with a team-high four shots on net in 26:23. Duncan Keith tied his career high with his 19th point of the postseason, the primary assist on Teravainen’s goal, and skated 29:15 in the game.

Niklas Hjalmarsson led Chicago with four blocked shots in “only” 22:34, and Johnny Oduya blocked two and added two hits and three shots on net in 23:46.

While Chicago’s power play failed to succeed in three chances, the Hawks penalty kill was very good against arguably the most dangerous power play in the game. Tampa was unsuccessful on two advantages in the game, and Chicago stayed out of the box as they rallied in the third period.

David Rundblad skated 7:22 and Kyle Cumiskey only 5:01 on Wednesday night. After the practice skate earlier on Wednesday, Quenneville indicated that Trevor van Riemsdyk was “close” and “might” appear in the series.

Crawford finished the night with 22 saves against 23 shots in the victory.