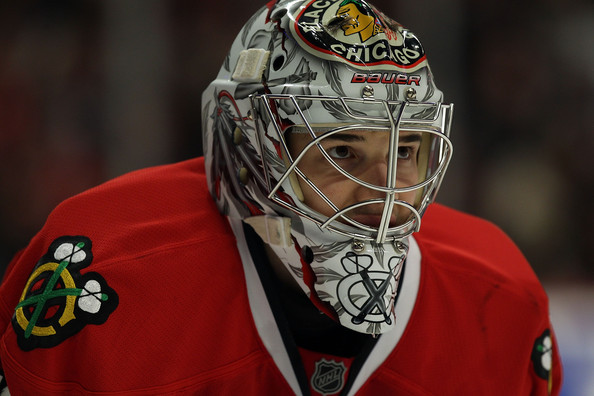 If you go to any number of NHL sites – ESPN, CBS, Fox, TSN, etc – you’ll find the same three names listed as the only “qualified candidates” for this year’s Calder Trophy.

Well, with all due respect to the talking heads, any use of common sense would lead them to give the award to the player that is truly the best rookie in the NHL this year – Corey Crawford. Some fans in the Windy City look at San Jose being the #2 seed in the West and say “I wish we still had Antti Niemi. Really?

Also, Crawford has as many shutouts – four – as Roberto Luongo and Cam Ward.

The simple reality is that Crawford is one of the elite goaltenders in the NHL this year.

Skinner gets “extra credit” for being a teenager, and has certainly had an incredible season with 31 goals (entering Saturday). But Skinner is tied for 38th in the NHL with 62 points, and he is the rookie leader.

Grabner has had a remarkable run this year, tallying a rookie-best 33 goals. But he is tied for 10th in the NHL in that category this year.

And Couture? He is tied with Skinner – for 19th in the NHL – with 31 goals. In fact, he probably comes with the most impressive stat of the three rookie forwards that are front-running for the award; Couture is tied for eighth in the NHL with eight game-winning goals.

Crawford ranks among the NHL’s best – not just rookies – in most important categories. The same cannot be said for any of the top three rookie forwards.

Of course, the next argument is “what have you done for me lately?” OK, let’s look at what these guys have done since the All-Star Break.

All of those are impressive. What about the forwards in the second half?

So we’ve established that Grabner has had the best second half among rookie skaters. But ranking 18th and 22nd in the NHL?

Again, Crawford ranks among the NHL’s best – not just rookies – in most important categories since the Break. The same cannot be said for any of the top three rookie forwards.

But there are still some are impressed with Skinner and Couture contributing to potential playoff runs by the Hurricanes and Sharks, respectively.

Skinner is the leader of his own team in goals, assists, points and he has as many game-winning goals as defenseman Jamie McBain.

Couture, meanwhile, ranks sixth on the Sharks in points, second in goals and second in game-winning goals.

Would the Sharks be a playoff team without Couture? Probably. Heck, they won the President’s Trophy without him last year.

Would the Canes be a playoff team without Skinner? Maybe. A stronger case can be made that Skinner has been more valuable to a postseason team – at the ridiculous age of 18 – than any other rookie skater.

But let’s cut the bullsh** and own reality: if the Blackhawks don’t have Crawford between the pipes this year, they might playing for a better position in the Draft lottery on Sunday. Marty Turco hasn’t started a game since February 11, and has only appeared twice since then. Crawford has been the man in Chicago for two months.

So, if the argument is which rookie has had the biggest impact on their respective team’s postseason run, the answer is clearly Crawford.

Crawford has had the biggest impact on his team’s playoff chances, and is among the best at his position in the NHL. No other rookie can say that, so no other rookie should claim the honor of “best rookie.” 3 thoughts on “Corey Crawford For Calder: How Is The Embarrassing NHL Media Ignoring Chicago’s Goalie?”