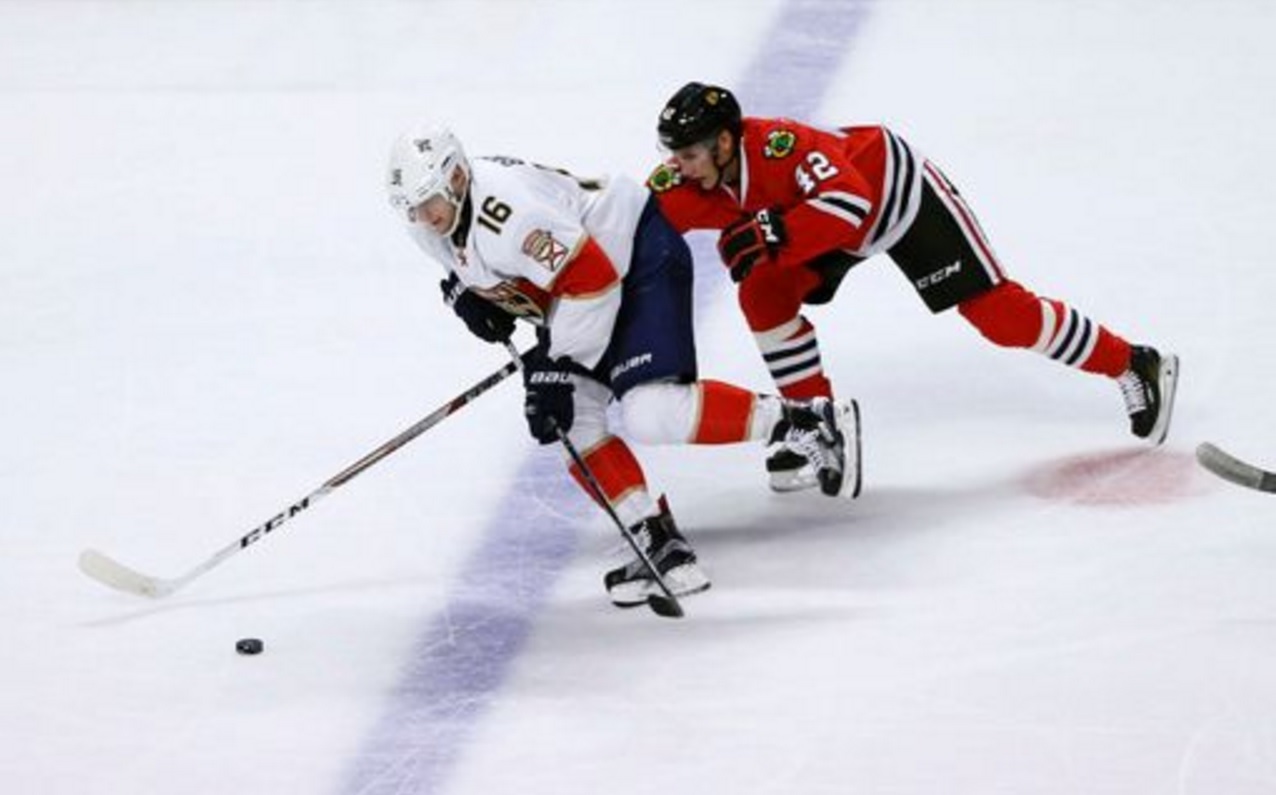 The Blackhawks returned to the United Center after their Circus Trip with the best record in the Western Conference (still), but it was the visiting Florida Panthers who were making headlines over the last couple days around the NHL.

Tom Rowe made his debut as the head coach of the Panthers after Florida unceremoniously fired Gerard Gallant. So even renewing friendship with former Panther Brian Campbell wasn’t top-of-mind for the crew on Tuesday night.

Chicago was without captain Jonathan Toews, who is reportedly dealing with a back issue that “isn’t serious” according to Chris Kuc at the Chicago Tribune. Jordin Tootoo was in the lineup in place of Andrew Desjardins, and Michal Rozsival played in place of Michal Kempny.

The ice at the United Center appeared to leave a lot to be desired; the puck was bouncing for both teams and the Hawks had a lot of trouble completing passes and handling the puck early. But Richard Panik – who had been a ghost for weeks in the box score – scored his seventh of the season with 2:10 left in the first period to give Chicago a 1-0 lead.

The goal is Panik’s first since Oct. 22, a stretch of 17 games. He opened the regular season with six goals in six games before disappearing for five weeks.

Florida out-shot the Hawks 13-8 in the first period and both goaltenders were sharp. Corey Crawford made a few terrific saves to maintain the tie game early, and to keep his team in front after Panik’s goal.

Neither team did any damage in the second period, but the surprising part of the stat sheet was the Hawks’ performance at the dot. Chicago won 22 of 50 in the first two periods including Vinnie Hinostroza losing all five of his draws in the opening 40 minutes. Artem Anisimov won 10 of 21 to lead the Hawks, and every other Chicago skater was over 50 percent at the dot entering the final period.

Each team fully killed a penalty in the second period, and Niklas Hjalmarsson went to the box with 52 seconds left in the period. When the third period began, Jaromir Jagr took advantage of the Hawks being without Hjalmarsson and Brent Seabrook being stung by a shot and tied the game. Jagr’s power play marker came 35 seconds into the third.

It’s worth noting that nine (9!) players on the current Panthers roster weren’t yet born when Jagr faced the Blackhawks as a member of the Pittsburgh Penguins in the 1992 Stanley Cup Final.

Seabrook went to the room following the score to receive attention after the Jonathan Marchessault shot hurt him, leaving the the Hawks with five defensemen for about six minutes. Seabrook did return to the bench with a little under 14 minutes left in regulation.

With eight minutes left in the third, Jakub Kindl hooked Anisimov and Chicago got a chance to match Florida’s power play goal after a terrible “advantage” in the second period.

Unfortunately, early in the power play a Duncan Keith shot hit Anisimov on the inside of his right skate and he struggled to get to the bench when Florida cleared the puck. He eventually went to the room after the Hawks’ power play ended in failure (again). Rookie Nick Schmaltz replaced Anisimov with Patrick Kane and Artemi Panarin.

The Hawks’ Triple H line of Hossa-Hinostroza-Hartman was very good throughout the game again, and has continued to play well in the absence of Toews. In regulation, they were easily the Hawks’ best possession line, posting the best Corsi For percentages on the team (Hinostroza and Hossa led the way, both finishing the third period above 63 percent).

At 19:40 into the third, Kane was sent off for high sticking to complicate the beginning of overtime.

Crawford stopped 34 of 35 in regulation, while Roberto Luongo stopped 29 of 30 to match Crawford’s stellar play. But Florida got to start the extra five minutes 4-on-3 with the dynamic Kane in the penalty box.

The Hawks killed the penalty and Kane came right out of the box to a potential shot opportunity cut off by a bouncing puck. There wasn’t a stoppage until there were 62 seconds left in the overtime period, meaning the two teams skated 4-on-4 for more than two full minutes. The Panthers got a great scoring chance just before the horn to end overtime, but Crawford made another spectacular save to send the contest to a shootout. Crawford made four saves in overtime.

In the skills competition, Panarin devastated Luongo and then Panik ended the game with a second shootout goal for the Hawks.

Panik finished leading the Hawks with five shots on goal and four hits. Dennis Rasmussen had another strong game, finishing tied for the team lead with two takeaways in more than 15 minutes of ice time. Chicago won 39 of 74 faceoffs without Toews on the night.

The Blackhawks are now 9-1-2 at home this season, where they’ll host the Devils on Thursday night.