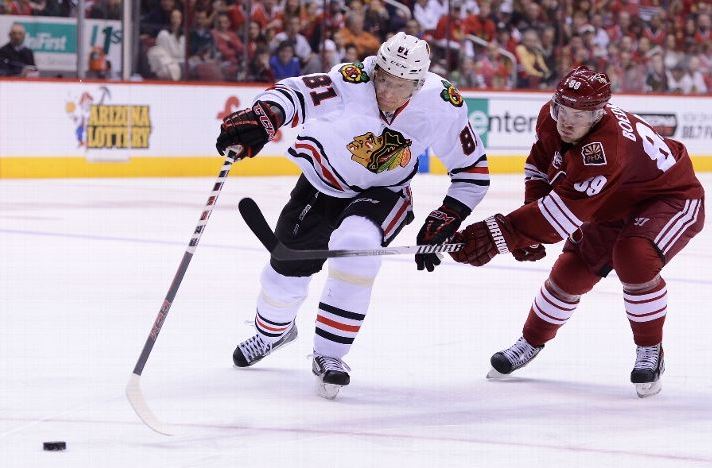 For the first time since Feb. 25, 2012, the Blackhawks were held scoreless in a regular season games and head to the Olympic break with a 2-0 loss to the Coyotes. It took only 61 seconds for a trend to develop and 69 seconds for the Coyotes to score the eventual game-winning goal. Brandon Bollig tripped Shane Doan at 1:01 and Keith Yandle scored just seven seconds into the power play. Unfortunately for Hawks fans, the Coyotes only needed one goal on Friday night.

Bad penalties were the theme of the night for the Hawks. After an exceptional start of the new calendar year while killing penalties, both goals allowed in Glendale were while the Yotes had a man advantage.

The second goal for the Coyotes came during a 5-on-3 in the second period. Brandon Saad crashed into Smith, and Michal Rozsival picked up an unsportsmanlike penalty in the scrum that followed to put the Hawks down two skaters. Radim Vrbata scored 43 seconds into the power play.

Crawford stopped 24 of 26 shots in the loss, and complained after he was hit in the head by Antoine Vermette’s stick just before Vrbata’s goal. Niklas Hjalmarsson was engaged with Vermette in front of the net and took his feet out from under him, leading to Crawford getting whacked. Coach Joel Quenneville was hot after there wasn’t a call on Vermette.

In his first game with the Hawks, center Peter Regin blocked two shots in 11:39, including 1:14 during Chicago power plays. He won three of six faceoffs in the game.

The Hawks were without Patrick Kane, who was home in Buffalo after his grandfather passed away. Johnny Oduya missed his second consecutive game with a lower-body issue as well.

With the Olympic break beginning this weekend, the Hawks don’t play again for more than two weeks. Their next “home” game is at Soldier Field against the Penguins on March 1.

70 thoughts on “Coyotes Shut Out Blackhawks”