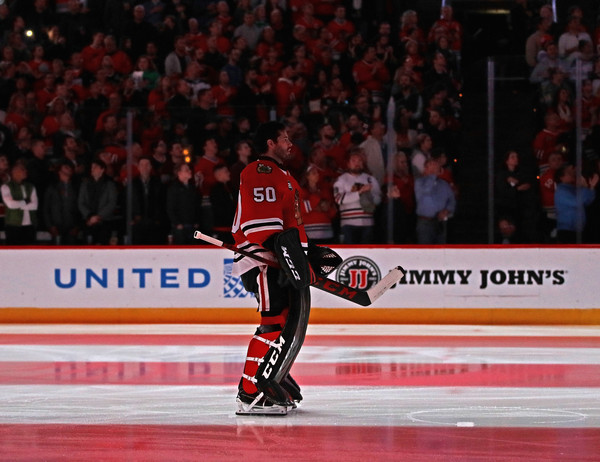 After 300 days away from the NHL ice, Corey Crawford returned to the blue paint on Thursday night.

Crawford was playing at a Vezina level last year when he was lost for the season with a concussion. He returns to join a Hawks team that had scored 22 times in the first five games of the season.

Unfortunately for Crawford and the fans at the United Center, the Blackhawks didn’t maintain their average of better than four goals per game.

Chicago managed only one against a collection of former Blackhawks including goaltender Antti Raanta.

The only goal of the first period came from Lawson Crouse, who completed a nice 2-on-1 feed from Clayton Keller. There wasn’t much Crawford could do on the play, but Brandon Manning did a nice job playing the role of pylon as Keller and Crouse approached the net.

During the game the Blackhawks showed a tribute video for Niklas Hjalmarsson, which clearly brought some well-earned emotions out of the former Hawks defenseman. Chicago also honored Brent Seabrook passing Bob Murray into first place all-time in regular season games played by a Hawks defenseman.

Erik Gustafsson tied the game for the Blackhawks at 6:34 into the second, finishing a nice passing play from Jonathan Toews and Alex DeBrincat.

Toews and DeBrincat have picked up a point in every game this season.

Two minutes after the Gustafsson goal, another former Chicago skater cashed in. Vinnie Hinostroza scored his first of the year to break the tie and give Arizona a 2-1 lead. This goal would hold up as the game-winner as the Blackhawks simply couldn’t finish any good chances the rest of the night.

Keller extended the Arizona advantage to 3-1 at 14:22 into the third.

Coach Joel Quenneville pulled Crawford with 5:11 left in regulation but the Hawks continued to struggle controlling the puck. Hinostroza scored his second of the night at 17:40 to close the books for the evening.

Crawford stopped 27 of 30 shots in the game and looked pretty good considering he had been off for almost a full calendar year.

Gustafsson skated a Chicago-leading 23:04 and was credited with a team-high four shots on net. He had a strong night.

Artem Anisimov was the only skater on the team to rate a minus-three on the night.

Counting how the former Blackhawks performed at the United Center on Thursday night: