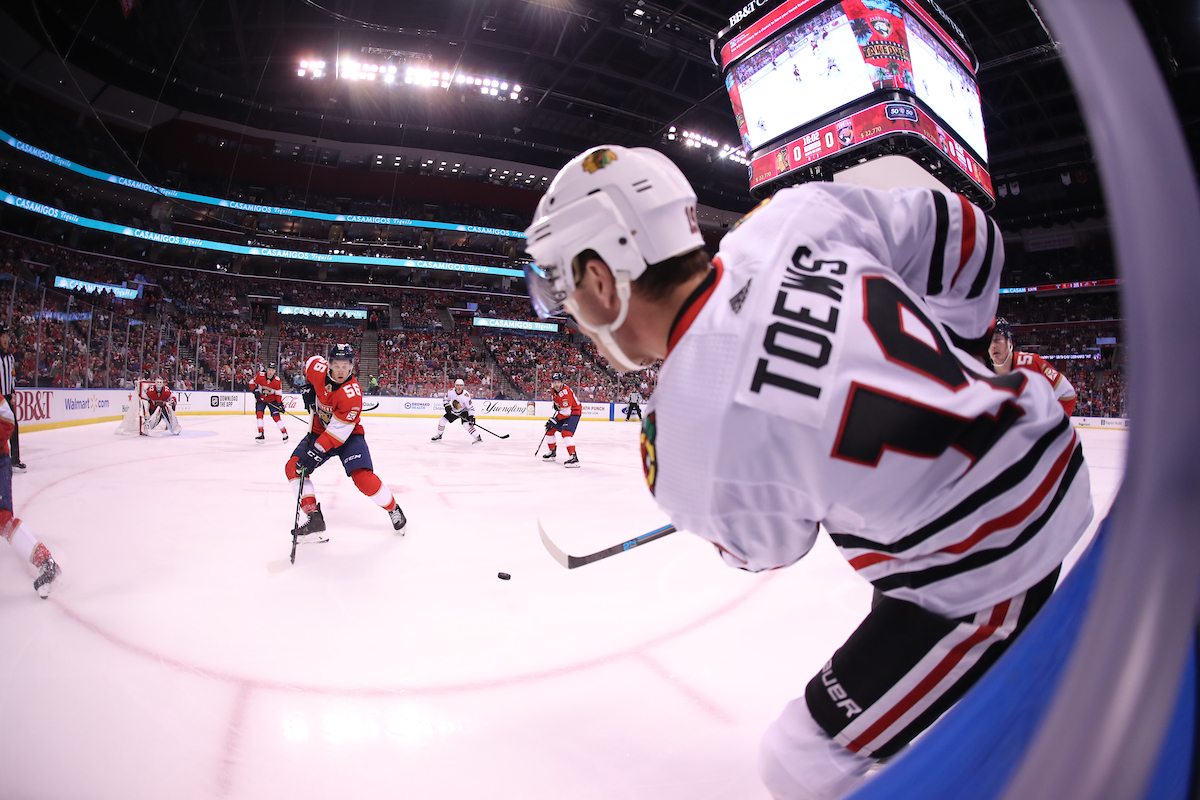 After a stunning third period in Tampa, the Chicago Blackhawks looked to stay warm in the sunshine state with an early Saturday evening game against Joel Quenneville’s Florida Panthers.

Chicago was looking to win two straight games for the first time since their five-game winning streak from Jan. 11-18. The Hawks are 4-8-2 over that stretch, a crippling six weeks that have seen Chicago coast into last place in the Central Division and well out of the playoff race.

The Hawks came out of the gates strong, but were chasing early. Mike Hoffman got Floirda on the board at 4:07 into the first. Other than the Hoffman goal the rest of the first period was dominated by the Blackhawks.

Jonathan Toews had a strong first period and found himself in the right place at the right time to tie the game. Adam Boqvist found his stick for an easy redirection goal at 12:54 into the first.

Chicago got three unanswered power plays in the first period but failed to convert on any of them. Despite out-shooting the Panthers 14-4 in the opening 20 minutes and having six minutes of advantage, the Blackhawks started the second period with the score tied at one.

Toews kept working and the goals kept coming. Chicago took a 2-1 lead at 6:51 into the second period when Drake Cagguila (officially) was credited with redirecting a Connor Murphy shot into the net.

Toews picked up an assist on the Cagguila goal to give him two points in the game.

After the Cagguila goal the Blackhawks spent four straight minutes short-handed. Olli Maatta went to the box at 8:09. Four seconds after he left the box Duncan Keith went off. The Blackhawks were able to kill off the two penalties successfully, however.

Florida out-shot the Blackhawks 15-10 in the second period but Chicago carried a 2-1 lead to the third. Corey Crawford was having yet another strong night between the pipes.

Florida got another power play opportunity early in the third when Kirby Dach went to the sin bin 71 seconds into the third. Chicago killed that penalty as well and maintained their one-goal lead.

Inside the final two minutes of regulation Mike Matheson absolutely undressed Olli Maatta in neutral ice and was able to attack the Chicago net. He beat Crawford for the tying goal with 1:28 left on the clock.

Regulation came to a close with the game tied at two – thanks to Crawford. Chicago was out-shot 17-2 in the third period and 36-26 over regulation. Crawford was terrific. On the other end of the ice, Sergei Bobrovsky got some help from the post a couple times in the third period to keep the game close enough that his skaters could tie it late.

Toews continued his dominant evening with a couple impressive shifts in overtime. Chicago’s captain is playing exceptional hockey right now. He almost won it by himself at the mid-way point of overtime but Bobrovsky was able to make a big save.

Crawford made a couple enormous saves in overtime to keep the game tied, perhaps none as big as one he made with 23 seconds left in OT on the Panthers 40th shot of the night.

The Hawks were completely out of gas by the end of the overtime session but survived to the shootout.

Toews and Kane scored in the shootout and Crawford made two saves to earn the second point. Chicago swept their games in Florida and has back-to-back wins for the first time in more than a month.

Toews won 19 pf 32 faceoffs in 19:47 and was credited with three shots on net. He was dominant all over the ice all night.

Alex Nylander skated a team-low 6:41 (nine shifts) and was credited with nothing but two giveaways.

Boqvist skated 16:41 with one hit, one blocked shot and one assists in the game. He had a much better effort after a struggling for a bit.

Dach skated 17:29 and lost all five of his faceoffs but was credited with one hit, one takeaway, one blocked shot and one shot on net.

Kane skated 22:58 to lead all Chicago forwards and finished tied with Murphy for the team lead with four shots on net.