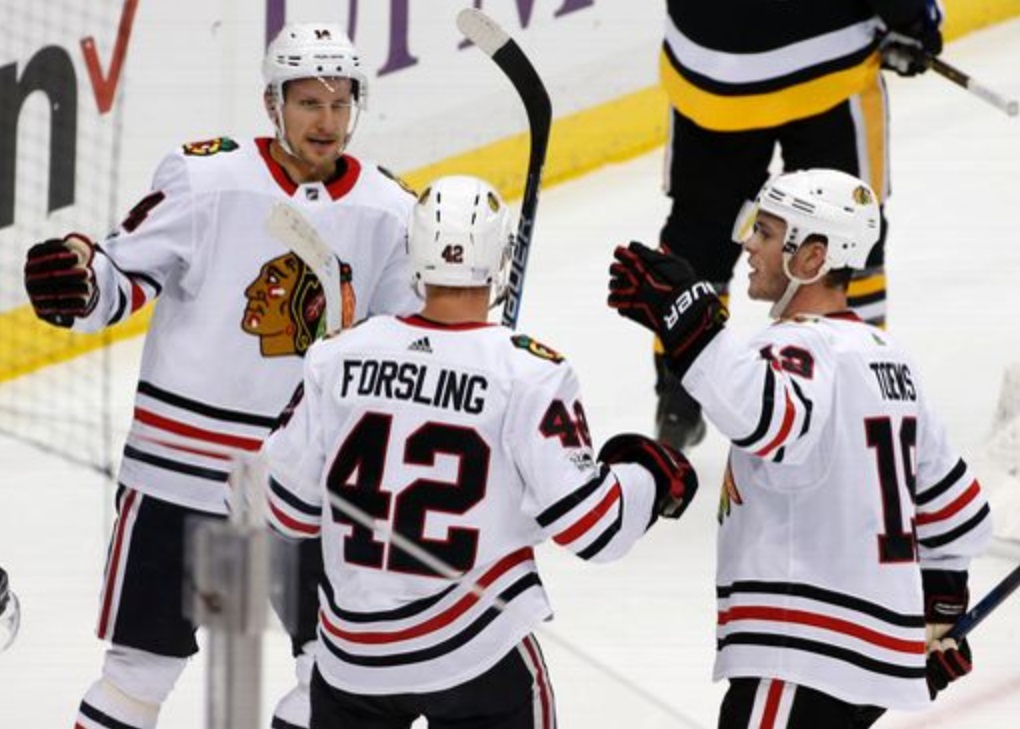 After the Blackhawks opened their 2017-18 season with a 10-1 thumping of the Pittsburgh Penguins, most fans had Saturday night circled as a potential redemption game for the defending champs.

On the Penguins’ home ice in Pittsburgh, the Hawks stole headlines early on Saturday with the announcement of the 2019 Winter Classic, which will officially be played in South Bend between the Hawks and Boston Bruins.

In the first period, it got chippy quickly. Richard Panik and Kris Letang both went off at 6:16 for roughing each other. Letang served two minutes for delay of game soon after returning to the ice, and Matt Murray took a tripping penalty that was served by Conor Sheary.

While Sheary was serving the Murray penalty, the Hawks got on the board with Gustav Forsling’s second of the year.

At the end of one, the Blackhawks were 1-2 on the power play and out-shot the Penguins 12-9. Corey Crawford had a strong first period.

With 11:17 left in the second period, Evgeni Malkin made no effort to avoid Crawford as the Hawks netminder came out to play the puck. Malkin caught Crawford in the head with a knee and was sent to the box. Unfortunately, Crawford also had to leave the ice as the officials made the Hawks go to Anton Forsberg.

At that point in the game, Crawford had been terrific, stopping all 17 shots he had faced.

By the time the Hawks’ power play ended unsuccessfully, Crawford was back behind the Hawks bench waiting to return. And with 8:30 left in the second he finally got a whistle to come back in – but it was because of another injury.

Connor Murphy blocked a shot and wasn’t able to get back to his feet and needed assistance getting off the ice. Crawford replaced Forsberg.

A little more than three game minutes later, Murphy also returned to the Blackhawks bench after spending time with the trainers.

John Hayden served a couple minutes in the box late in the second but the Hawks successfully killed the penalty and took a 1-0 lead to the dressing room after 40 minutes.

Bryan Rust gave the Hawks a power play early in the third that was wasted.

Less than one minute after the Rust penalty ended, Patrick Sharp was caught hooking and went to the box. With 20 seconds left on the Sharp penalty, Letang interfered with Artem Anisimov as a bad pass drifted toward center ice. Letang went back to the box, killing the Pens’ advantage and giving the Hawks 1:39 of a power play soon after Sharp left the box.

Matt Hunwick scored a short-handed goal during the Hawks’ power play to tie the game at one.

But the game would be tied for only 21 seconds, a pass missed Nick Schmaltz and bounced around the Pittsburgh net, finding Anisimov on the doorstep for the power play goal.

Anisimov continues to be red hot, scoring his ninth in his last ten games and tenth of the season. Schmaltz and Kane picked up the power play assists.

At 11:33 Jake Guentzel appeared to tie the game for Pittsburgh, but Olli Maatta clearly made contact with Crawford as the shot was being released. Coach Joel Quenneville challenged the play and a quick review found there was indeed interference. The goal was reversed and Chicago kept their 2-1 lead.

An indication of how much trust he has earned from his coach, DeBrincat was on the ice with two minutes left in a one-goal game in Pittsburgh.

Murray went to the bench for an extra attacker with 90 seconds left in regulation. Richard Panik iced the pick with 1:07 on the clock but Pittsburgh called a timeout, giving the Blackhawks a desperately needed breather.

With 17 seconds left in regulation Crawford made a huge save on a Phil Kessel shot into what appeared to be a wide open net to keep the game tied and the Blackhawks were able to hang on and win the game in regulation.

Crawford was superb in the third period. He finished the night with 35 saves.

Anisimov won six of 16 faceoffs with his one goal, four shots on net and two takeaways. Since moving back onto a line with Kane, Anisimov has been absolutely on fire.

On the blue line, Quenneville spread out the ice time relatively evenly once again.

Rutta led the Hawks with three hits. Kane and Sharp were credited with a team-high five shots each. Keith and Seabrook led the way with three blocked shots each.

Sidney Crosby was limited to no points, two shots on net and won 13 of 27 at the dot in the loss.