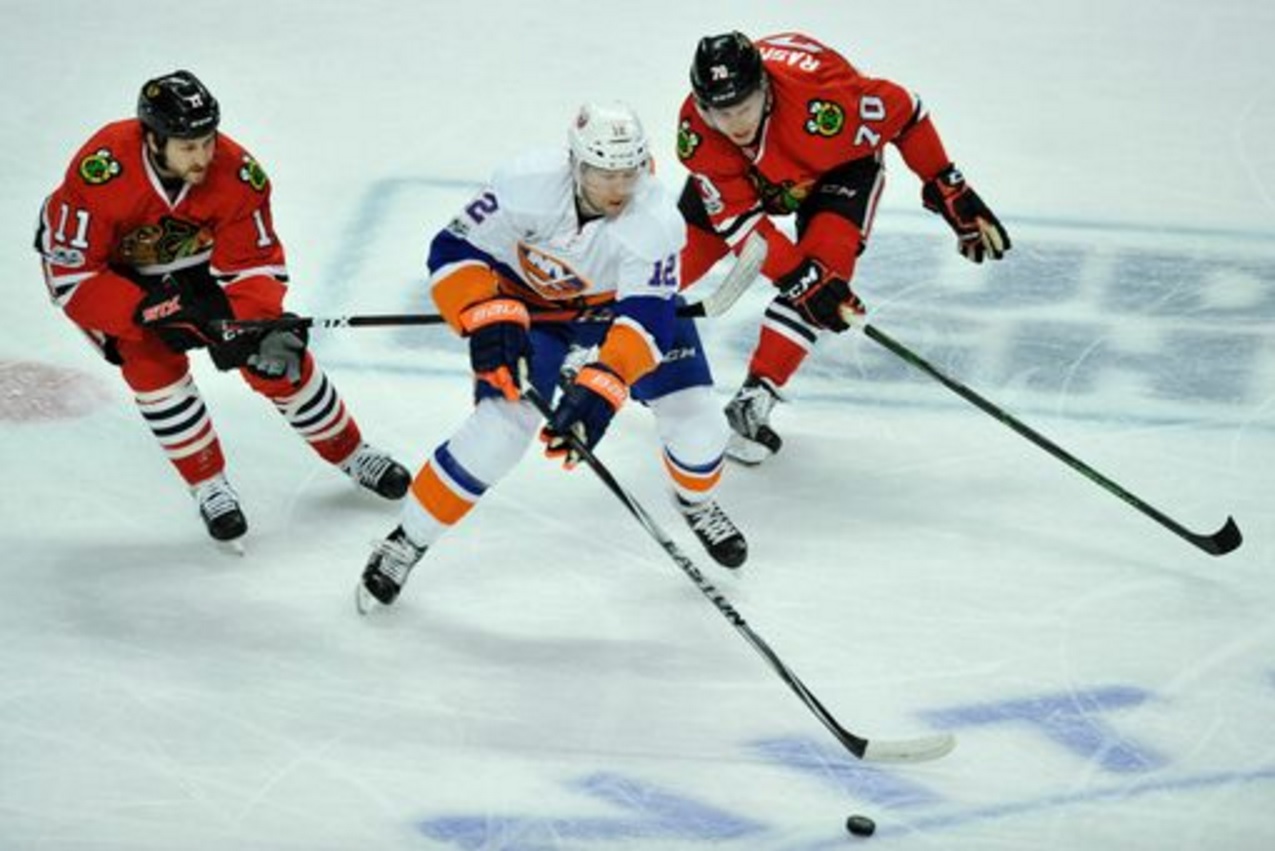 The Blackhawks have been playing well of late, but were without some significant names for Friday night’s game.

Corey Crawford was back between the pipes, but the Hawks had to recall Jeff Glass to back him up as Scott Darling was dealing with an upper-body issue. Also missing from the lineup were Niklas Hjalmarsson and Johnny Oduya (both lower-body) on the blue line and Nick Schmaltz (sick) and Artem Anisimov (lower-body) up front.

Which means Jordin Tootoo and Andrew Desjardins dressed, Ryan Hartman moved up to the top line with Richard Panik and Jonathan Toews, and Tanner Kero was centering Patrick Kane and Artemi Panarin.

No big deal with John Tavares and the Islanders coming to town, right?

The Islanders came into Friday night’s game at the United Center having won six of their previous nine and with a 5-4 in Dallas on Thursday night on their resume.

Brock Nelson’s 14th goal of the season – initially ruled a short-handed goal but later changed to even-strength – scored just as an Anders Lee penalty ended to open the scoring and give the Islanders a 1-0 lead in the second period. With the exception of the Nelson shot, Crawford played well against 19 shots over the first and second periods but wasn’t getting any help from the offense in front of him.

The Hawks showed their first signs of consistent life on offense with just under 14 minutes left in regulation after a Tomas Jurco penalty ended. Thomas Greiss made a couple huge saves during a sequence that saw the Hartman-Toews-Panik line hold the puck in the zone for a long shift before getting a stoppage.

Coming out of a commercial shortly after that rush, coach Joel Quenneville pushed his panic (not Panik) button; he rolled out Panarin-Toews-Kane. But still, no offense.

Things started to get chippy in the final five minutes and Crawford went to the bench with 2:08 left. The Blackhawks loaded up and were finally able to get a shot past Greiss as Duncan Keith found Panarin who unloaded for his 20th of the year.

The third period ended with the score tied at one and with Chicago having out-shot New York 15-8 in the third period. Greiss and Crawford were both very good in regulation, earning a point for their teams.

Overtime saw both goaltenders make fabulous saves against odd-man rushes, with perhaps the biggest being a Crawford stop of a Josh Bailey breakaway after he dumped Hossa with a minute left in overtime.

In 65 minutes of hockey, Greiss stopped 30 of 31 and Crawford stopped 31 of 32 in an all-around magnificent performance on both ends of the ice.

And a thrilling five minutes led to a match being decided in a skills competition, the first shootout for the Blackhawks since Nov. 29.

Toews scored to open the shootout. The Islanders counted with Joshua Ho-Sang, who was skating in his second career NHL game. Crawford denied Ho-Sang. Greiss then stopped Kane, and Crawford rejected Nikolay Kulemin.

The man who tied the game in regulation then came out and ended the contest in the shootout. Panarin emphatically snapped home the game-winner to pick up the important second point in the standings.

Desperate for offense even with a game on Saturday night in Nashville, Kane skated 26:10 and Toews skated 24:49 on Friday night. The Hawks relied heavily on Toews at the dot as well. Chicago’s captain won 13 of 28 faceoffs while the rest of the roster took 23 combined. Marcus Kruger won half of his eight draws and Kero won four of 10.

Kruger led the Hawks with three blocked shots and Hartman led the way with four hits. Brent Seabrook had a team-leading five shots on goal and Toews had two takeaways to pace the Hawks.