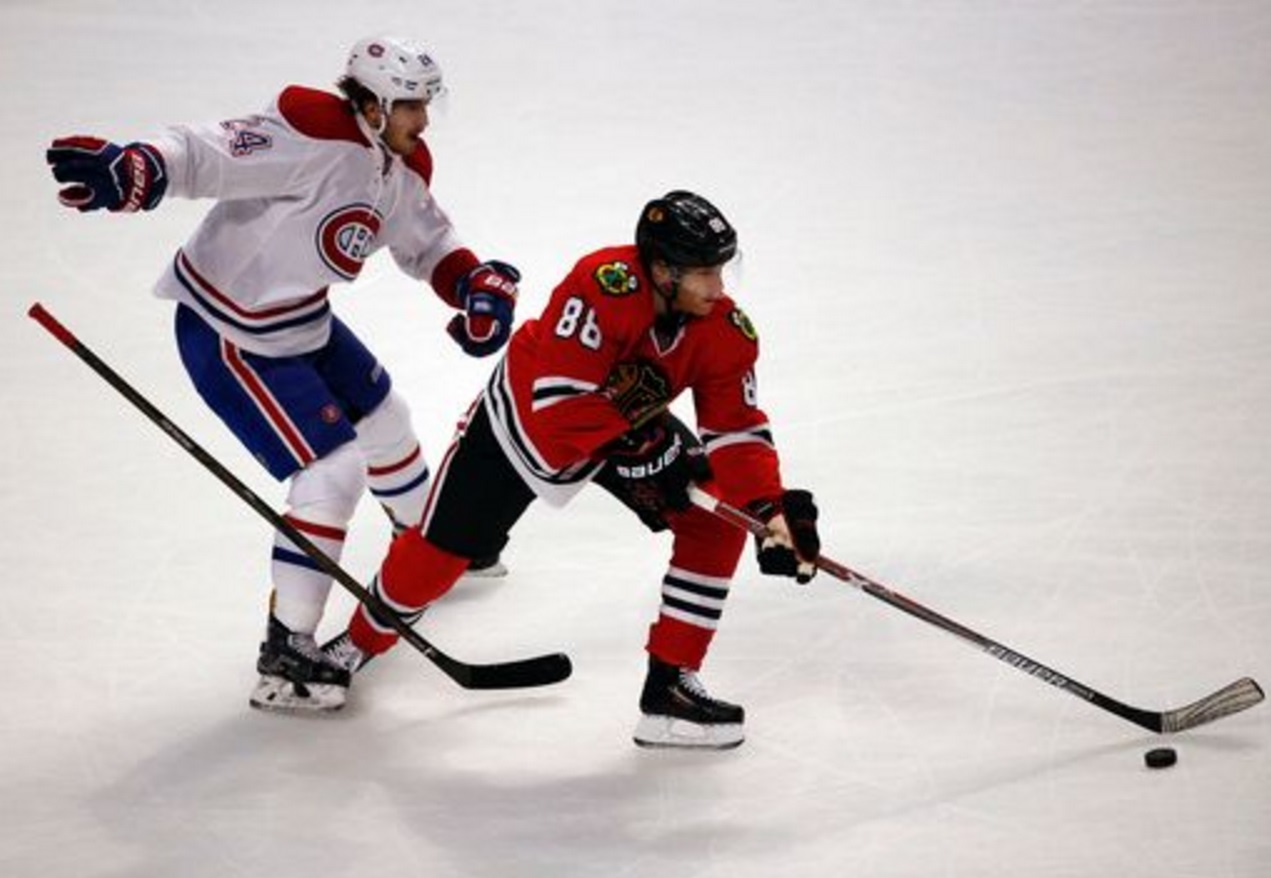 We’ll get to the entire game, but let’s fast forward straight to the sexy.

That dirty piece of damage from Patrick Kane gave the Blackhawks a 3-2 lead at 16:23 into the second period that they would hang onto until the final horn. The goal, Kane’s sixth of the year, provided enough offense for the Blackhawks to win a game in which Corey Crawford had another stellar effort.

Chicago got off to a good start, out-shooting Montreal 9-7 in the first period. Gustav Forsling scored his first career NHL goal at 12:06 to get the Hawks on the board.

In the closing minutes of the first period, Andrew Shaw had a glorious breakaway opportunity but was stoned by Crawford. A couple minutes later, Max Pacioretty was hit in the face by a redirected Shea Weber blast and went to the room for repairs. Montreal’s captain would return to the game, but the Blackhawks would take a lead to the first intermission.

The second period started and it quickly felt like the wheels were coming off. Brian Campbell needed to serve nine seconds of penalty time to open the second, which he did without issue. But Duncan Keith went to the box 15 seconds after Campbell came out and the Habs took advantage.

The assumption when seeing “Shea Weber PPG” on the scoresheet is that the former Nashville captain unloaded his bomb of a shot, but the tying goal was maybe the least-Weber goal we’ve ever seen against the Hawks.

That unfortunate redirect off Michal Kempny’s stick tied the game at one 59 seconds into the middle period. Only 1:41 later, Andrei Markov sniped one past Crawford to give Montreal two goals in less than two minutes, and a 2-1 lead.

Montreal came in having won four in a row and five of six in the month of November. But the fact that it was Al Montoya and not Carey Price at the other end of the rink left the door open for a comeback.

And the Blackhawks would get after Montoya before the second period came to a close.

Marian Hossa stayed red hot and tied the game with his ninth of the season at 11:29. Nick Schmaltz and Jonathan Toews picked up the assists on Hossa’s marker.

Toews picked up the only assist on Kane’s game-winner five minutes later, but Vince Hinostroza made a tremdendous play to initiate the rush. Ryan Hartman started the game on the Hawks’ top line but Hinostroza started to see shifts with them early. The two would both get shifts with Toews and Kane the rest of the way, and both got involved frequently.

The Hawks held a 22-12 shot advantage heading to the third period and continued their dominance into the third. But Montreal had chances, only to be denied time and time again by Crawford.

When the dust settled after a frenetic closing three minutes that included offsetting penalties on Hartman and Montoya, Crawford had put on a show in front of a national audience and earned a huge victory against the Eastern Conference-leading Habs. Crawford made 21 saves, many of which were spectacular.

Toews had a big night, winning 18 of 27 faceoffs and leading Chicago with two assists. He was also credited with a team-leading three takeaways, two hits and one blocked shot. Artem Anisimov returned to the lineup after missing Friday night’s game against Washington. He won eight of 18 faceoffs in 16:24 on the ice.

Brent Seabrook and Niklas Hjalmarsson led the way with five blocked shots each, while Kempny led the Hawks with five hits. Campbell led Chicago with four shots on net.

In his return to Chicago as a visitor, Shaw had a massive night in the box score. In 17:58, Shaw won five of 13 faceoffs and was credited with a game-high six shots on net and nine hits. Phillip Danault, who did not receive a video montage from his former team, won six of 11 faceoffs and finished minus-two in the loss.

Before the game started, the Blackhawks kicked off a new promotion called “One Last Shift.” The team played the following video montage before Hall of Famer Denis Savard skated out onto the ice in full uniform to join the Blackhawks for the national anthems. It was fitting that “Savoir-Faire” would come out with the Montreal Canadiens in the building.