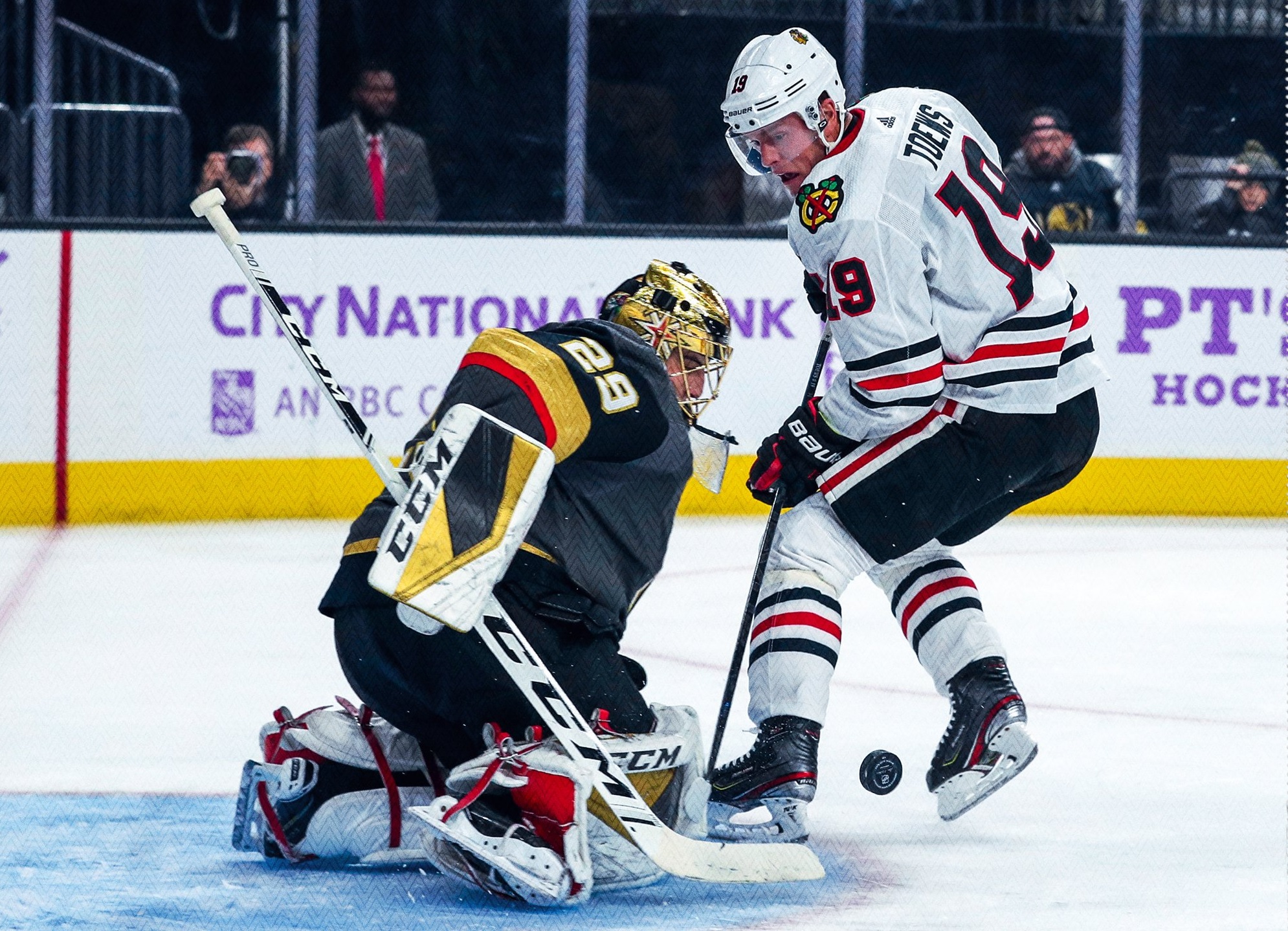 For the first time in a while the Blackhawks looked fast, kept up the pace and took it to a good team.

It was fun to watch.

But it didn’t start that way.

Vegas scored twice in the opening 6:29 of the game to take a 2-0 lead and it felt like another Hawks loss to the Golden Knights. Vegas was flying and the Hawks were on their heels. Vegas’ second goal, by William Karlsson, came on a power play.

Kane’s goal came 16 seconds after the Karlsson tally and gave the Blackhawks new life. Alex DeBrincat and Dylan Strome picked up the assists on Kane’s ninth of the season.

After Kane’s goal the final 13 minutes of the first period were a track meet. The teams flew up and down the ice trading chances. The quality of goaltending from Corey Crawford and Marc-Andre Fleury was incredible and the pace was fantastic.

At the conclusion of 20 minutes of hockey Vegas had a 16-8 shot advantage and led Chicago 2-1 on the scoreboard.

Early in the second period it appeared for a moment that Alex Tuch had tied the game. The play was reviewed and the puck hit the crossbar and bounced out. Chicago remained within one – for moments.

Before the crowd in Vegas sat down from the ruling of the Tuch no-goal Zack Smith set up Calvin de Haan for his first goal as a member of the Blackhawks.

The assist was the 100th helper in Smith’s career. Kirby Dach had the second assist on de Haan’s game-tying goal.

Chicago broke the tie 45 seconds later on another terrific pass, this time from Strome to Erik Gustafsson.

Kane picked up the second assist on the Gustafsson goal.

The final 15 minutes of the second period were more insane than the first period. Crawford and Fleury continued to make ridiculous saves, the two teams continued to fly up and down the ice and neither team wanted to sustain puck possession for very long. These two teams were intent on scoring and had the green light to shoot as soon as they had a look.

At 10:45 into the second Crawford was called for allegedly throwing his stick and Jonathan Marchessault was awarded a penalty shot. It was a garbage call and the puck didn’t lie; Marchessault whiffed on the penalty shot attempt.

When the horn sounded after 40 minutes of hockey both netminders took a deep breath. The shot totals showed Vegas out-shooting Chicago 31-17. But the Blackhawks had a 3-2 lead heading to the third.

Dach continues to get thrown around the ice and took a number of big hits in the first and second periods. One, late in the first, appeared to have him knock heads with an opponent. Another was an awkward hit into the wall in front of the Vegas bench. He has to get stronger on his skates and be more aware or one of these hits is going to do some serious damage; he already missed time because of a concussion suffered at a rookie tournament before the season.

But he continued skating hard and took advantage of his opportunities. Dach scored his third of the season at 3:57 into the third period to extend Chicago’s lead to 4-2.

Smith and Ryan Carpenter were credited with the assists. The goal gave Dach the first multi-point game of his NHL career.

At 16:39 into the third Strome broke through and scored his fourth of the year to put the final nail in the coffin.

With Strome’s goal the Blackhawks comfortably finished the final three minutes of regula… just kidding. Nate Schmidt rifled a shot through a screen and cut the lead to two with 60 seconds left in regulation.

That would conclude the scoring, however, and the Hawks earned the first win against the Vegas franchise.

de Haan was magnificent on the back end. He skated 21:38 and led Chicago with three blocked shots officially. He was also credited with four hits and one takeaway.

Crawford faced 42 shots in the game, stopping 39. He was a stud the entire night.