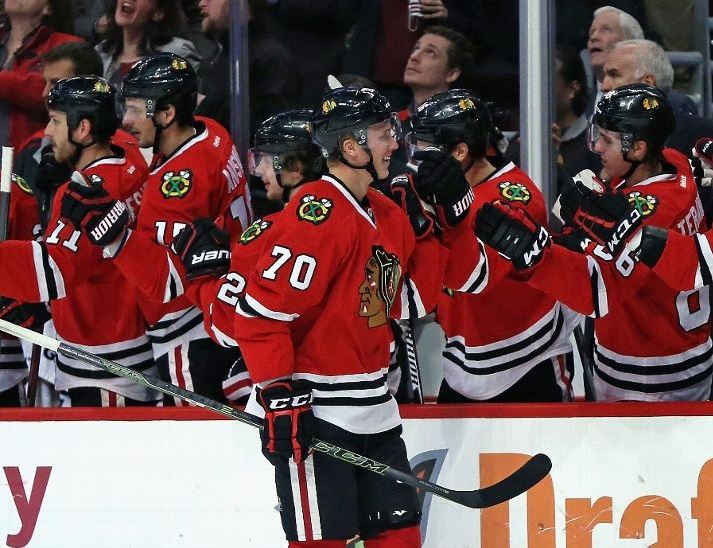 Patrick Kane didn’t extend his franchise-record point streak until the game was in hand and the Nashville net was empty, thanks to exceptional work by Corey Crawford.

Crawford 36 saves, many of which were acrobatic and in traffic. He was rightfully named the game’s number one star after earning another big victory for the Hawks on home ice. The Preds put at least ten shots on goal in all three periods but Crawford was up to the task.

Dennis Rasmussen got the scoring started with his first career NHL goal – on his first career shot. Andrew Shaw picked up the lone assist on a nice redirect by the rookie center, who was credited with two hits and won one of four faceoffs in his NHL debut.

In the second, Shaw added a second point with a power play goal. He received a gorgeous pass from Teuvo Teravainen and was able to rifle a shot past Pekka Rinne to extend the Hawks lead to 2-0. Unforunately, five minutes later Eric Nystrom and Roman Josi executed a pretty break that ended with Nystrom breaking up Crawford’s shutout. Nystrom’s goal came with 46 seconds left in the second period and could have given the Preds some momentum heading into the third.

But Teravainen extended the lead back to two with his sixth goal of the season only 14 seconds into the third period. With two points on the night, Teravainen has three in his last two games while skating primarily with Marian Hossa and Jonathan Toews.

After Teravainen’s goal, the scoring chances were primarily coming off visiting sticks but Crawford continued his terrific night.

It wasn’t until Rinne went to the bench that Kane was able to extend his point streak. He and Artemi Panarin had a number of really good scoring chances throughout the night, but weren’t able to finish until the closing minutes. Kane, Panarin and Artem Anisimov combined to miss the net with six shots while only three were on target, but the late tally keeps Kane’s streak alive.

Bryan Bickell was in the lineup again and played a fairly physical game again, picking up a team-leading three hits in only 8:22 on the ice. He was also credited with one blocked shot. Five Blackhawks were credited with three blocked shots each in a nice defensive effort, but Crawford made up for a number of errors as well.

With Tanner Kero back in Rockford, Andrew Desjardins moved back into a primary role on the penalty kill and played well. He was one of the players credited with three blocked shots and spent 2:13 short-handed as the Hawks were perfect against only two Preds power plays.

David Rundblad was in the lineup in place of Trevor Daley and was awful. He picked up an assist, but he handled the puck like a live grenade while skating on the power play and got pushed around the defensive end of the ice all night.

These two teams will get after it again on Thursday night in Nashville.