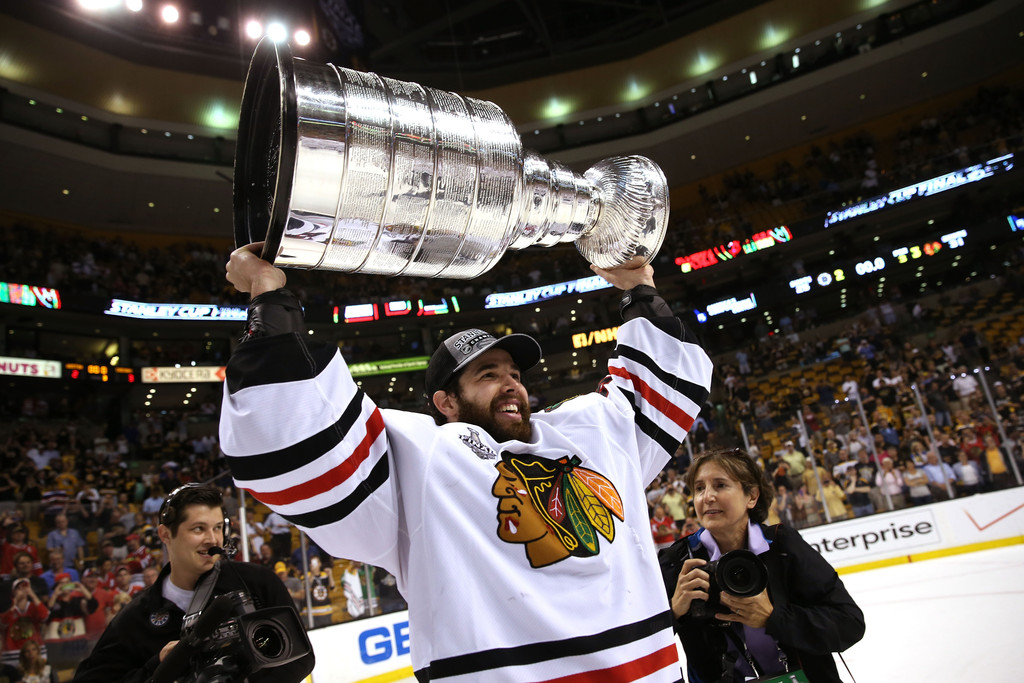 Not many thought the Blackhawk could win a Stanley Cup with Corey Crawford between the pipes. But as the Cup tours the Chicagoland area on Tuesday, the reality is now set in stone: Crawford’s postseason body of work stacks up with some of the best in recent years. After the Blackhawks were the only team in the NHL to not post a shutout last season, the outcry to make a change from Crawford and Ray Emery last summer came from fans and media alike.

Chicago GM Stan Bowman stayed the course however, and received exceptional return on his faith during the 2013 regular season. Crawford and Emery combined to win the Jennings Trophy, allowing the fewest goals in the league during the regular season. They led the Hawks to the Presidents’ Trophy, but there were still doubters.

Some even asked if Emery should be the man to start the postseason. After all, the Western Conference playoffs were loaded with “elite” goaltenders, and certainly that word wasn’t going to be used when referring to Crawford.

Crawford would have to beat four of the league’s best to kiss the Cup. An injury removed one strong opponent from the postseason, but Crawford held his own against three fantastic goaltenders in these playoffs.

The Wild were over-matched as the eight seed coming into the first round, but some thought Backstrom might steal a game or two and make the series interesting. Unfortunately for Minnesota, Backstrom was injured before the first game of the series and, even though Josh Harding did everything he could to keep an overwhelmed Wild team in the series, Minnesota’s netminders weren’t enough. In the first round, Crawford posted a .950 save percentage with one shutout, allowing only seven goals in five games.

Howard was truly special in the first four games of the series, and did all he could to knock the Hawks out. But Chicago’s offense finally broke through, and Crawford once again stood strong. Against Detroit, Crawford posted a .929 save percentage, allowing 14 goals in seven games. His performance in Game Seven, allowing only one goal in over 63 minutes of hockey, will be one of his career’s signature games.

In spite of the pedigree of Backstrom, Harding and Howard, Quick presented the most obvious stumbling block for Crawford and the Hawks. The reigning Conn Smythe winner was a good bet to out-play Crawford, and the Hawks would come up short in their quest for another Cup.

But that wasn’t the case. Crawford’s .927 save percentage in the series was significantly better than Quick’s .897, and his performance into double overtime of the conference-clinching game was enough to get the Hawks back into the Cup Final. Again, extra hockey did not phase Crawford, as he stopped 33 of 36 shots in over 91 minutes of hockey in the clinching victory.

Even after leading the Blackhawks past three “elite” goaltenders, there were still many that wondered when – not if – the magic would run out for Crawford.

In an epic series that was as good as any in recent memory, Crawford was good enough to not only win the Cup, but he should have been named the Conn Smythe winner (with all due respect to Patrick Kane). Even in the Hawks’ two losses in the series, Crawford allowed only four goals.

Because of overtimes, Crawford spent more than 13 more minutes in the six-game Cup Final than he did in the seven-game series against Detroit. His .925 save percentage was his worst series total in the playoffs, and that included the ugly 6-5 Hawks win in Game Four.

Perhaps the strongest indication of Crawford’s departure from the 2012 playoffs was his performances in extra time; overtimes were no problem for Crawford in these playoffs. The Hawks were forced into free hockey time on seven occasions in the 2013 postseason, winning five times.

In those seven games – and 10 overtime periods – Crawford was incredible. He stopped 61 of 64 shots for a .953 overtime save percentage in the 2013 postseason, highlighted by stopping all 13 shots in the two overtimes to eliminate Los Angeles and all 29 Boston shots in the triple-overtime thriller in Game One of the Cup Final.

But how good were his postseason numbers?

Here’s a list of all the Stanley Cup winning goaltenders since 2001. The names in bold won the Conn Smythe; we also included JS Giguere’s Conn Smythe-winning postseason numbers from 2003, even though those Ducks lost in the Final to Martin Brodeur’s Devils.

As you can see, Crawford’s numbers stack up favorably with most of the Cup winners on the list. His save percentage, in spite of only one shutout, comes in better than Hasek, Ward, Giguere (2007), Osgood, Fleury and yes, Niemi.

In fact, when we put Crawford’s numbers up against those from Niemi in 2010, there is no question which netminder had the better postseason when winning the Cup.

And, unlike Niemi, Crawford will be back in Chicago the year after winning it all to help raise the banner on Opening Night.

Are we ready to label Crawford as an “elite” goaltender? Some will be more comfortable than others at this point. But all have to now recognize that the word “champion” will forever be linked to Crawford as the Blackhawks’ netminder.