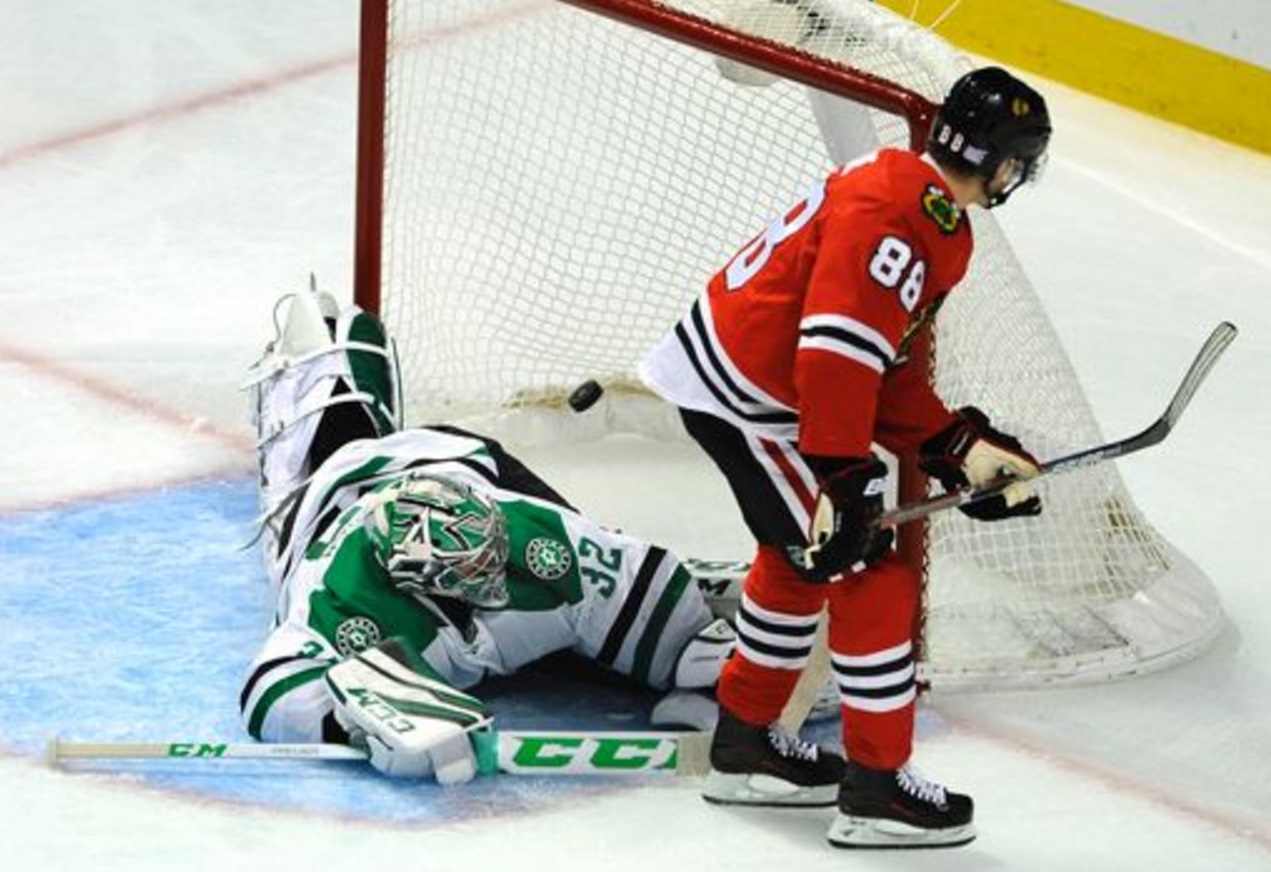 After not allowing a power play goal in four straight games, Tyler Seguin beat Scott Darling with a snipe late in the first period to give Dallas a 1-0 lead. The Stars out-shot the Hawks 10-7 in the opening 20 minutes, and Darling made a number of big saves to keep the score close.

A quick whistle stopped play with four seconds left in the first period, and the Hawks got an offensive zone draw. While that theoretically is a positive situation, it became a negative when Artemi Panarin was called for tripping at the horn. Chicago started the second period short-handed for a second time in the game.

Chicago was able to kill the Stars’ power play and got one of their own when Radek Faksa went to the box for hooking. Unfortunately, the Stars took advantage of a really bad Blackhawks power play. Gemel Smith scored his first career NHL goal short-handed to extend the Dallas lead to 2-0 at 8:29 into the second.

Almost two minutes later, Jonathan Toews set up Patrick Kane in front and the lead was cut in half.
,

Later in the second period, Ryan Hartman delivered another big hit behind the Stars’ net. As play continued around the boards, Faksa rode Tyler Motte into the sidewall. While the collision could have been considered Motte losing an edge, the crosscheck to Motte’s head/shoulder after the fact should have been called.

Tyler Motte appears to be dinged up on this play. pic.twitter.com/w7jXL1vdhu

Motte went directly to the room and did not return. There was no penalty called on Faksa.

Chicago out-shot Dallas 14-9 in the second period, but trailed 2-1 after 40 minutes.

The Blackhawks got a power play at 2:36 into the third when Antoine Roussel played the puck with a broken stick.

Not sadly, the Blackhawks exploded in the following two minutes.

During 4-on-4 play, Marian Hossa made a beautiful pass to Toews who tied the game.

In the 60 seconds that followed, Jamie Benn jumped on the ice and got a breakaway that was denied by Darling. The puck went the other way and Toews made a power move to get a good shot on net. Kari Lehtonen made the save, but a rebound found Artem Anisimov on the doorstep.

Anisimov’s eighth goal of the season gave the Blackhawks a 3-2 lead only 56 seconds after Toews tied the game. It also extends Anisimov’s point streak to 11 games.

Nick Schmaltz saw a lot of action with Toews and Kane in the third period with Motte sidelined, and he looked comfortable with the two superstars.

Lehtonen went to the bench for an extra attacker with two minutes left in regulation and Dallas made it count. A Jon Klingberg shot was redirected by Smith for his second of the game – and his career. The two sides finished out the final 80 seconds with only one good scoring chance (for Toews), but headed to overtime.

Toews had three points (one goal, two assists) and won 17 of 23 faceoffs in 21:28 during regulation. Anisimov won 12 of 25 at the dot with his go-ahead goal in 19:38. Both of the Hawks’ top two centers had two takeaways before the extra session began.

Kane went to the box again, this time 50 seconds into overtime at the end of a long shift to start the free hockey. Scott Darling made a couple enormous saves, one especially big save 43 seconds into the power play with Patrick Eaves looking at a wide open net.

With 30 seconds left in overtime, and with Anisimov’s butt parked right in front of Lehtonen’s face, Hossa unloaded from the point and beat the Stars for the second time in as many nights.

Darling finished the night with 32 saves, stealing the show especially in overtime.

Brent Seabrook (two assists) and Michal Kempny led a more favorably scored game with five hits each, while Kane had as many takeaways as he did shots on goal (three). Duncan Keith also had two assists and Niklas Hjalmarsson led the Hawks with three blocked shots.

Toews led Chicago with three points and seven shots on net, and finished winning 19 of 26 faceoffs. Anisimov won his only overtime faceoff to finish .500 at the dot and posted two points (one goal, one assist).

The Blackhawks have now won six in a row and have points in eight straight games.

After the game, coach Joel Quenneville offered a less-than-favorable update on Motte.

Quenneville said Tyler Motte could miss some games with a lower-body injury. #Blackhawks