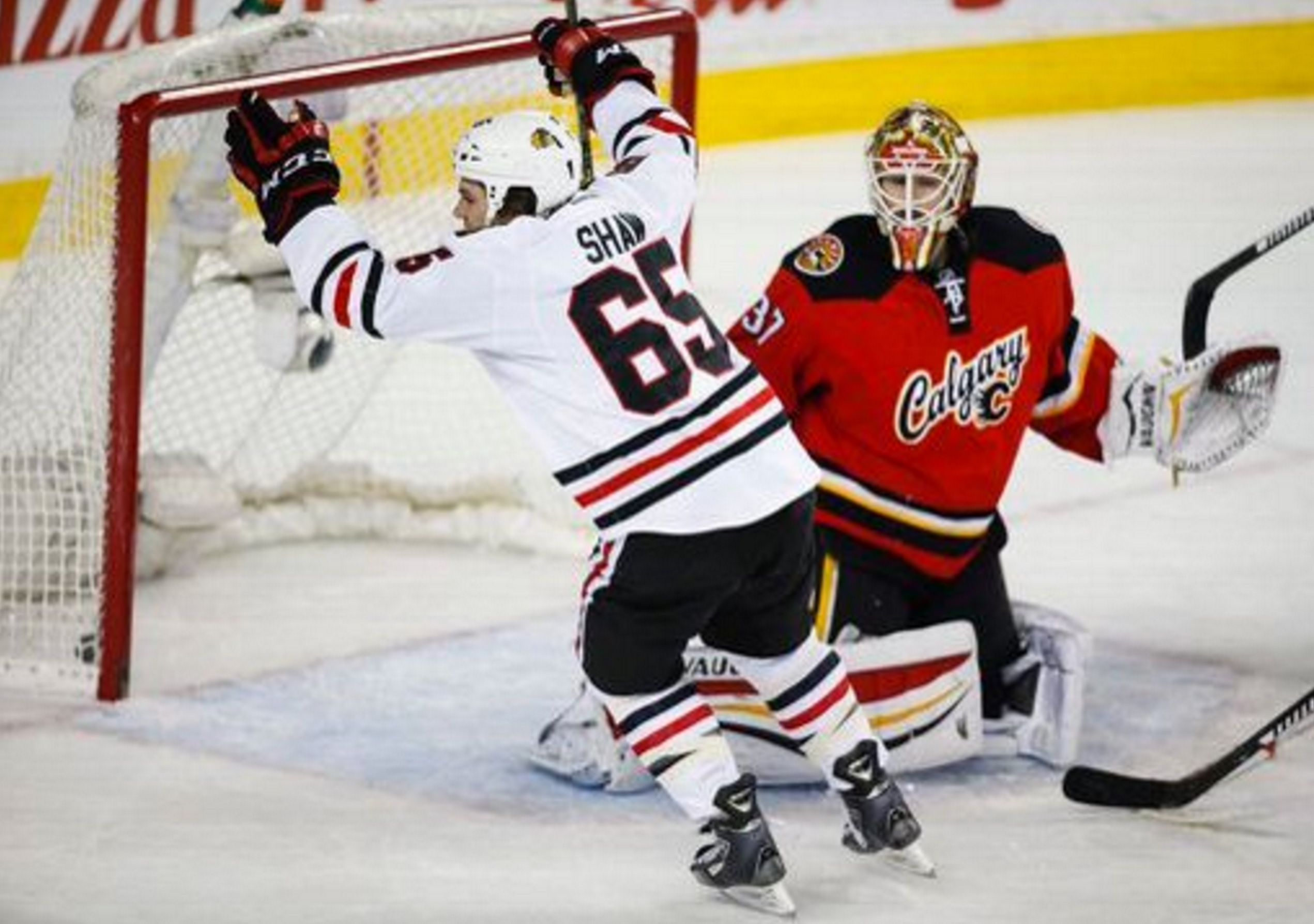 The Blackhawks welcomed Marcus Kruger back to the lineup on Saturday night in Calgary, and

Both teams put nine shots on net in the first period, but both goaltenders were perfect in the opening 20 minutes. There were no penalties, and the limited scoring chances were handled well by the gentlemen between the pipes.

Sam Bennett went to the box 3:10 into the second, but the struggling Blackhawks power play failed to convert for the 21st consecutive advantage. Only 41 seconds after the power play ended, Andrew Ladd received a gorgeous pass – from Calgary’s TJ Brodie – and unloaded for his 21st of the year (fourth since being traded back to Chicago).

Dougie Hamilton had been physical all night, but a fluke play led to his biggest impact of the night. His older brother Freddie whiffed on a shot attempt, but the redirection found Dougie wide open for the shot. The younger Hamilton tied the game at one, and moments later the penalty boxes got busy.

At 13:41, Andrew Shaw picked up a minor penalty for roughing Bennett. Garnet Hathaway came to Bennett’s defense and received an off-setting penalty.

Dougie mixed things up again 40 seconds into the 4-on-4, running Brent Seabrook in front of the Hawks net. Hamilton didn’t make an effort to get off Seabrook (and pushed Seabrook’s head into the ice), and Jonathan Toews took exception on the play. Hamilton received two minutes for roughing Toews, and Chicago’s captain picked up a double-minor (the second of which was served by Artemi Panarin).

The Blackhawks successfully killed the 4-on-3 Calgary advantage. Shaw came out of the box flying and quickly created a scoring chance, but then slashed Hathaway and was sent back to the box only 20 seconds after leaving his first infraction.

Chicago killed 20 seconds of 5-on-3, thanks in large part to a great effort from Kruger, and then took care of the remaining 5-on-4 advantage.

Shaw left the box a second time, and once again was involved around the Calgary net soon after returning. This time, Michal Rozsival unloaded a shot that Shaw tipped past a stickless Joni Ortio for the go-ahead goal.

So in a span of 5:30, Shaw took two penalties, served all four minutes in the box, created one scoring chance and scored a goal on another shift.

In the third period, Darling continued to be the story. He stopped 20 of 21 through the opening 40 minutes, many of which were redirected in front or screened.

Hathaway went back to the box seven minutes into the third period for tripping Seabrook, but the Hawks failed on another power play opportunity.

Ladd scored his second goal of the night with 72 seconds left in regulation into an empty net to extend Chicago’s lead to 3-1. Ladd picked up an assist on Shaw’s goal, giving him a three-point night in a big road victory for the Blackhawks.

Teuvo Teravainen scored into an empty net with 11 seconds left to make the final score 4-1 in favor of the visitors. Patrick Kane picked up an assist on the final tally, giving the league’s point leader 93 on the season. Darling was spectacular from start to finish, stopping 31 of 32 to earn a big win for the Hawks.

Viktor Svedberg also returned to the Blackhawks lineup and started the night paired with Seabrook. He skated 11:14 and blocked one shot. Trevor van Riemsdyk was slotted on the third pair with Rozsival and skated 20:16. He and was credited with two blocked shots and two takeaways; they were on the ice for Calgary’s one goal, however.

Kruger skated 13:38 and won two of only four faceoffs in the game; Shaw won four of 11 at the dot on the fourth line. Kruger spent only 52 seconds killing penalties, but the Hawks’ overall PK unit looked much better. It undoubtedly helped that Calgary’s power play is a dumpster fire.

The Hawks are back on the ice on Sunday night in Vancouver.