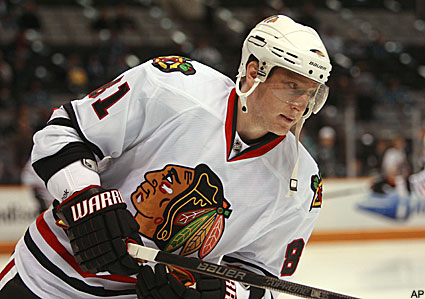 The Blackhawks top line had a big night and Scott Darling had a fantastic night in net as Chicago handed the now-former division leading Nashville Predators their second regulation home loss of the season.

Brandon Saad opened the scoring with a missile past Pekka Rinne with 5:07 left in the opening period. Saad, who scored the game-winner less than 24 hours earlier in Chicago, had four goals on the season before the Friday-Saturday games, but played a strong game all over the ice with Marian Hossa and Jonathan Toews.

In the second, Saad again made a great play to flip a pass through traffic across the crease to an open Hossa to get the veteran forward on the board and extend the Hawks lead to 2-0. It was Hossa’s fourth of the season, but wouldn’t be his last goal of the game.

Less than a minute into the third, Colin Wilson got the Preds on the board. His shot got through a couple Hawks and past Darling, but would be the sum of the Nashville offense on the night.

In the closing moments of the game, Hossa showed his exceptional all-around play by stealing a puck at center ice and hitting the empty net for his second of the night and closing the books on the Preds. In 19:15, Hossa was credited with a team-leading seven shots on net.

The offense came to play, but the game was won in net. Darling was spectacular, especially in the first and third periods. In his first NHL action since being recalled, Darling 32 saves against a lot of heavy Nashville pressure to earn a big road victory in the division.

On the other end of the ice, Rinne was equally special on Saturday night. He made 28 saves but took the loss, allowing two goals in the game.

Ben Smith led the Hawks with four blocked shots and Brad Richards was the best Blackhawks center at the dot, winning 11 of 17 draws.

Bryan Bickell and Daniel Carcillo once again received the fewest shifts among the Hawks forwards, getting only 12 each. Bickell took a high stick to the face in the first period and later dropped the gloves after getting tripped into the net by Seth Jones. He was credited with one blocked shot in the game, while Carcillo’s box score showed only one takeaway on the night.

Rookie defenseman Klas Dahlbeck, recently called up to replace Adam Clendening in the bottom pair rotation, skated 12:24 and was credited with one blocked shot and one takeaway in the game. He looked solid throughout and received some ice time late in a tight road game, a confidence not rarely given to young d-men by coach Joel Quenneville.

Duncan Keith had a team-high 26:18 on the ice and picked up an assist with two takeaways and one blocked shot on the night.

25 thoughts on “Darling, Hossa Too Much For Nashville”