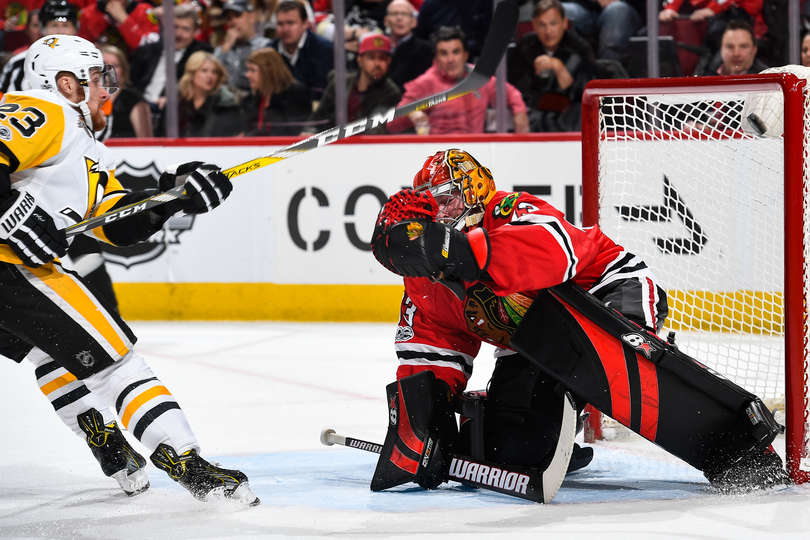 Yes, Patrick Kane had a hat trick on Wednesday night in front of a national audience.

Yes, Kane’s three-point night pushed him past Pittsburgh’s Sidney Crosby into second in the NHL with 68 points.

But the story of the night was goaltender Scott Darling, who was absolutely magnificent between the pipes against a superb offensive Penguins team as the Blackhawks beat Crosby and Company 4-1 at the United Center.

The first period came and went with little noteworthy action for either side. Justin Schultz went to the box at 14:44 to give the Blackhawks the game’s only power play, which was uneventful. Chicago out-shot Pittsburgh 9-7 in the period, and both goaltenders were on their games.

Early in the second period, Artem Anisimov disappeared up the tunnel for attention to a lower-body issue and he did not return to the game. The Blackhawks were already playing without Niklas Hjalmarsson, who was placed on IR on Tuesday, and newly-acquired Johnny Oduya wasn’t ready to join the lineup yet. Now, the Hawks were down their number two center.

Schmaltz, who has been hot over the last six weeks while skating with Jonathan Toews and Richard Panik, moved back to his natural position of center in the absence of Anisimov and was outstanding. Ryan Hartman bumped up to skate with Toews and Panik and agitated Crosby throughout the game while creating a few scoring chances of his own.

And at 8:49 into the second, Schmaltz set up Kane for his first of the night.

Pittsburgh’s Scott Wilson tied the game, but nobody was sure that he had scored. Play continued for some time after Wilson raised his stick in celebration, and nearly 30 seconds later the officials stopped play to have a chat with Toronto. Review showed that Wilson had scored a goal, and the game was tied at one with three minutes left in the second.

Then RICHARD PANIK DID WHAT?

Panik’s 17th of the year came with 24 seconds left in the second period as the Hawks put a lot of pressure on Pittsburgh, but Marc-Andre Fleury had a really good game of his own.

Pittsburgh out-shot Chicago 17-14 in the second, but the Hawks carried a 2-1 lead into the third.

Early in the final period Pittsburgh carried the action and put a ton of pressure on the Hawks, but Darling was fabulous.

Chicago held onto their one-goal lead until almost three minutes were left in regulation. That’s when Schmaltz set up Kane once again.

The two-goal lead held into the final two minutes and the Penguins pulled Fleury. Panik fired a puck into the empty net with a minute left in regulation, but the officials ruled that Hartman was guilty of a hand pass to set up the scoring opportunity.

It didn’t matter. Kane stayed on the attack and put a tricky backhander into the empty net from the corner to give him his second hat trick in three games and the Blackhawks a 4-1 victory.

In total, Schmaltz spent 7:12 on the ice with Kane and picked up two assists with Anisimov missing from action. The rookie also blocked three shots and was credited with three takeaways in a strong all-around performance. He did win only three of 11 faceoffs, however.

Chicago’s best performer at the dot was another rookie, though. Tanner Kero won eight of nine draws to lead the Hawks. Toews won half of his 14 faceoffs and Marcus Kruger, who hasn’t taken many faceoffs since returning from injury, won six of ten in the game.

Schmaltz finished tied with Duncan Keith and Brent Seabrook for the team lead with his three blocked shots. Hartman led the way with four hits and also put four shots on net.

Newcomer Tomas Jurco, in his second game with the Hawks, skated 11:44 with one hit and one blocked shot.

Darling stopped 36 of 37 in a matchup of Stanley Cup contenders.

Sidney Crosby was minus-two with zero points in the loss.