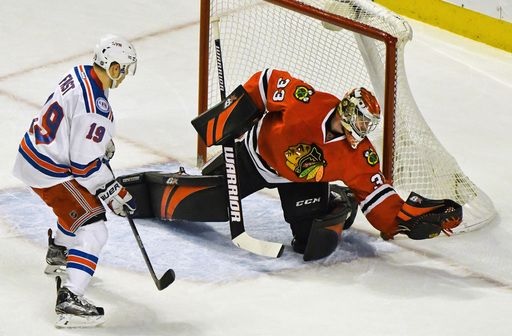 On Friday night, the Blackhawks and Rangers came into a prime time match-up missing some key players. Chicago was without Jonathan Toews and Brent Seabrook, and New York didn’t have Rick Nash available.

Both teams rolled with their backup goaltenders as well. Henrik Lundqvist watched from the bench and Corey Crawford is still on IR, so the battle was between Scott Darling and former Hawk Antti Raanta.

For 60 minutes, the story was the goalies. It appeared the Hawks had beaten Raanta in the third period, but the Rangers challenged that Hossa was offside on the play. The officials agreed and the game stayed tied at zero.

Darling made 36 saves in regulation. Raanta made 26. Neither team scored.

Unfortunately, Nick Holden was able to slip a puck past Darling 55 seconds into overtime to secure the second point for the visitors.

Chicago was credited with ten hits in the game, five of which came from Ryan Hartman. Without Seabrook available and with Michal Kempny again watching from the press box, Duncan Keith led the way with three blocked shots. Hartman and Patrick Kane led Chicago with four shots on net each.

Toews has now missed eight games with an upper-body injury.

28 thoughts on “Darling Not Enough Against Rangers”