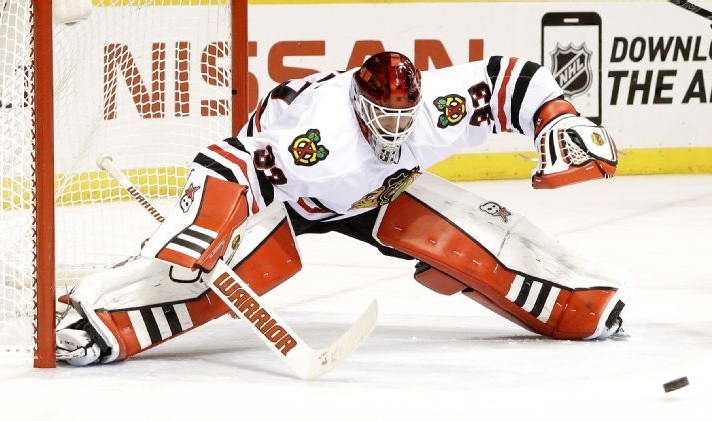 The opening 20 minutes were about as ugly as the Blackhawks have looked this year.

But the power play, which had been dormant for the last month, showed up with authority in the second period and a three goal deficit was erased in 14 minutes.

Nashville came out physical in the first period and chased the Blackhawks to the dressing room after the opening frame. Six minutes into the game, Colin Wilson brought the puck up the ice and Michal Rozsival played it about as poorly as an NHL defenseman could, giving Wilson a clear lane to advance the puck and get an easy, hard shot off that beat Crawford.

Wilson had himself a period to start the series. He had scored only once since Feb. 21, but scored twice in the game’s opening 20 minutes. His second, a power play goal that extended the Nashville lead to 3-0 late in the period, came after an ugly Joakim Nordstrom turnover. Sadly, ugly play was the calling card for most of the visitors in the first.

Three goals on only 12 shots was enough for coach Joel Quenneville, and he made a change in net to begin the second period.

Corey Crawford didn’t get much help on the first and third Nashville goals, but the second was squarely on him; Crawford came out of the net to play the puck and made a beautiful pass to former Hawk forward Viktor Stalberg, who easily put it into the empty cage.

With Scott Darling in net, the Hawks came out for the second with a sense of urgency we hadn’t seen in more than a week. Aided by a parade of Predators to the penalty box, the Hawks allowed only four shots on net in the second while they were credited with 11 against Pekka Rinne.

Mike Fisher, who was one of the more physical Predators players from the opening puck drop, was questionable for the start of the series and was not able to return to the game for the third period. He was only able to skate nine shifts (5:32) but was credited with two hits and one takeaway.

In the third, Nashville put pressure on Scott Darling and he responded in a big way.

Darling fought off 16 shots in the third to keep his teammates in the game. The Blackhawks put 10 shots on net, and Rinne was also up to the challenge. So, as has been the case for so many postseason games for the Hawks over the last couple years, overtime was required to determine the winner.

Quenneville cut his bench short on the blue line in the third period, as Kimmo Timonen and Rozsival were rarely seen after the middle of the game. Timonen skated only 8:03 and Rozsival was on the ice for 12:02 through regulation. Of course both defensemen appeared in the first three shifts of the overtime.

The first overtime period was fantastic theater. Both sides had great opportunities to score, but neither could convert as Rinne and Darling continued to be exceptional. Both teams also had to kill a penalty; Brad Richards went to the box for high-sticking at 12:42 and at 17:35 Seth Jones sat down for tripping.

The Jones penalty wasn’t well received by the fans in Nashville because Duncan Keith appeared to get away with a trip a few minutes prior, but escaped without a call.

Keith’s super-human effort culminated with the game-winning goal at 7:49 into the second overtime. In total, he skated 39:40 and was credited with one takeaway and two shots on goal. He also picked up an assist on Toews’ power play goal in the second period.

Chicago’s captain picked up two assists with his game-tying goal, but won only 10 of 30 faceoffs in the game.  Patrick Kane and Marian Hossa were credited with two assists each. For Kane, the early return from injury saw him on the ice for more than 23 minutes. He was credited with four shots on net and two takeaways.

The stunning win was a coming out party for Darling, though. After a regular season performance that earned him a two-year contract extension, he replaced Crawford after the first period and won the game for the Blackhawks. Darling made 42 saves and allowed zero goals to earn his first career playoff victory. He was magnificent.

Bryan Bickell led the Hawks with eight hits, while Hjalmarsson and Johnny Oduya led the way with four blocked shots each.

80 thoughts on “Darling To The Rescue, Blackhawks Win In 2OT”