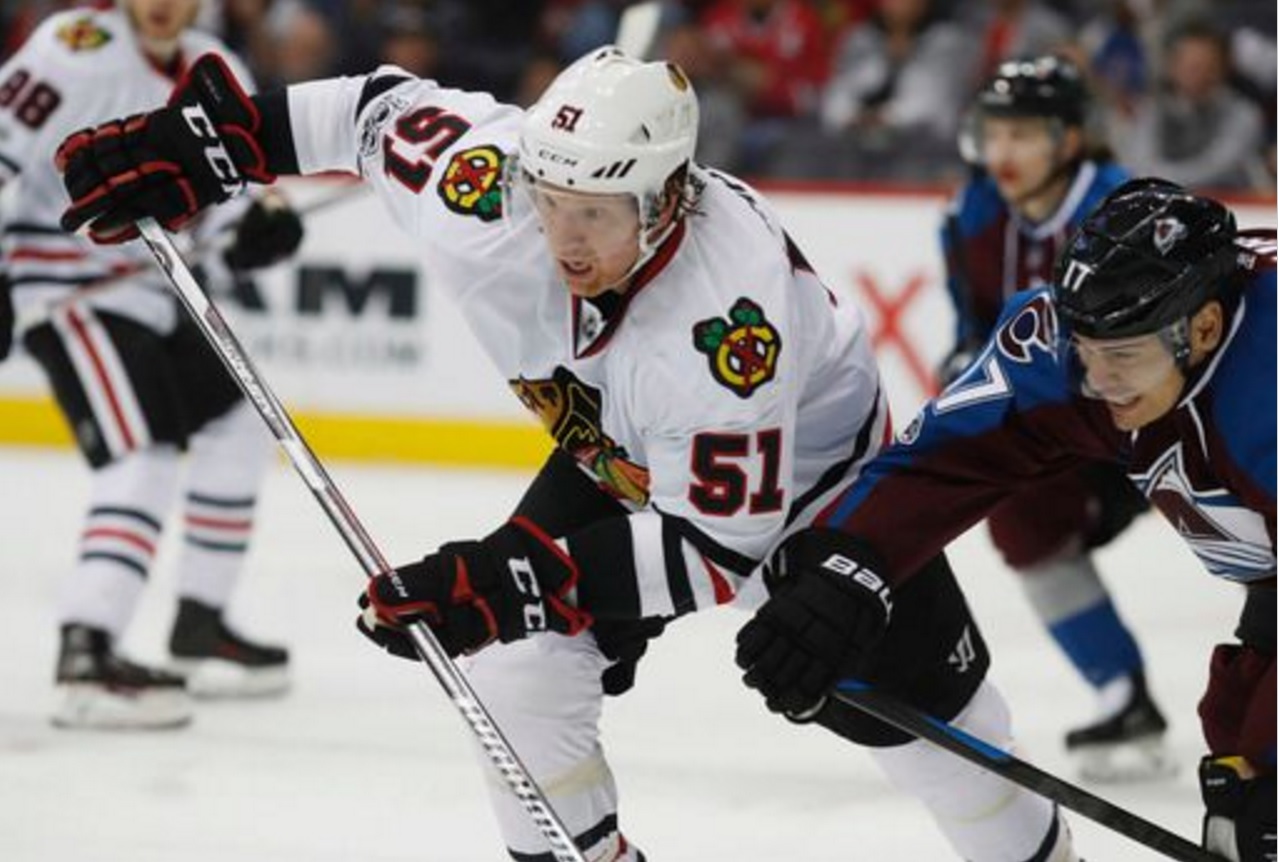 The Colorado Avalanche came into Tuesday night’s home game 62 points behind the Chicago Blackhawks in the Central Division.

With Niklas Hjalmarsson at home taking care of family business and the top seed in the Western Conference locked-up, the Hawks dressed a few guys who haven’t seen action in a while. Michal Kempny, Michal Rozsival and Vinnie Hinostroza were in while Duncan Keith, John Hayden and Jordin Tootoo joined Hjalmarsson in having the evening off.

And the Avs went after the Hawks immediately in the first period.

Thanks to Scott Darling, the Avs were scoreless in spite of a 16-3 shot advantage after 20 minutes. Both teams had a power play in the first; Rene Bourque had 48 seconds remaining in the box when the second period began.

After an ugly first, the Hawks woke up to start the second period and scored before Bourque could leave the box.

Artemi Panarin’s 30th of the season came 28 seconds into the middle frame off assists from Patrick Kane and Jonathan Toews.

Less than four minutes later, Ryan Hartman inched closer to joining the six Blackhawks who have reached the 20-goal mark when he put home his 19th.

Chicago kept their foot on the gas and Marcus Kruger, who had the only assist on Hartman’s goal six minutes earlier, scored his fifth of the campaign.

When Francois Beauchemin went to the box 39 seconds after the Kruger goal, it appeared the Blackhawks might blow the roof off in Denver. But the Hawks opted instead to open the door for a comeback with a lazy pass that turned into a Matt Duchene short-handed goal.

Nathan MacKinnon went to the box 2:30 after the Beauchemin penalty ended, and the Avs generated the same result. This time it was Gabriel Landeskog scoring short-handed and the Blackhawks were suddenly up only one.

After putting only three shots on goal in the first period, the Hawks put 17 on net but were still out-shot 18-17 in the second.

When the dust settled from a crazy second period, Darling had stopped 32 shots already and the Hawks were up 3-2. Chicago would have to kill 1:57 with Nick Schmaltz in the box to open the third period, and the Avs had some momentum after the two short-handed goals.

The Hawks killed the Schmaltz penalty, but Colorado still held control of the game. When Mikhail Grigorenko tied the game at three, Colorado had a 10-0 shot advantage already in the third – and the teams weren’t six minutes into the period.

Brian Campbell went to the box 1:40 after the Grigorenko goal and Tanner Kero put a shot on net while short-handed to at least get the Hawks into the box score in the third.

Johnny Oduya spent two minutes alone in the box beginning at 12:42, and Darling once again kept his team in the game with a few terrific saves.

When the Oduya penalty ended, shots were 14-5 favoring Colorado in the third period.

Regulation ended with Colorado showing an even 50 in the shot column. Darling stopped 47. The skaters in front of Darling blocked another 24 in regulation led by five from Kero.

Chicago’s shot leaders at the end of 60 minutes: Hinostroza and Andrew Desjardins with four each.

With 3:03 left in overtime, Erik Johnson – the same player selected by St. Louis two picks ahead of Jonathan Toews – surprised Darling with a quick release and the Avs won the game 4-3.

17 thoughts on “Darlings Steals A Point, Blackhawks Buried By Avs In OT”