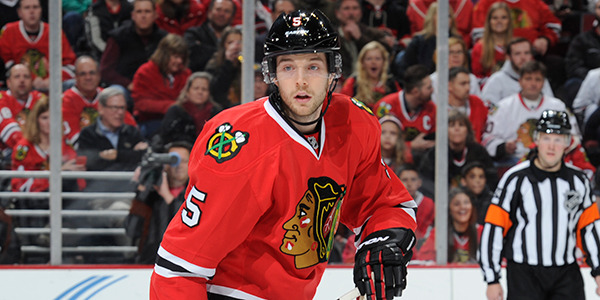 Rundblad, 25, was originally drafted in the first round (17th overall) of the 2009 NHL Draft by the St. Louis Blues. Since then, he has been involved in three relatively impressive trades for an underwhelming player.

At the 2010 NHL Draft, the Blues traded Rundblad to Ottawa for a first round pick. St. Louis used the acquired pick to select forward Vladimir Tarasenko.

In December 2011, Rundblad was traded with a second round pick in the 2012 NHL Draft from Ottawa to the Coyotes for center Kyle Turris.

Since joining the Blackhawks, Rundblad posted three goals and 13 assists in 63 games. He appeared (briefly) in five postseason games in 2015 and was pointless.

Rundblad was the third player placed on waivers by the Blackhawks during this regular season. Bryan Bickell went unclaimed and spent time in Rockford before returning; on Dec. 6, Viktor Tikhonov was claimed by the Coyote.