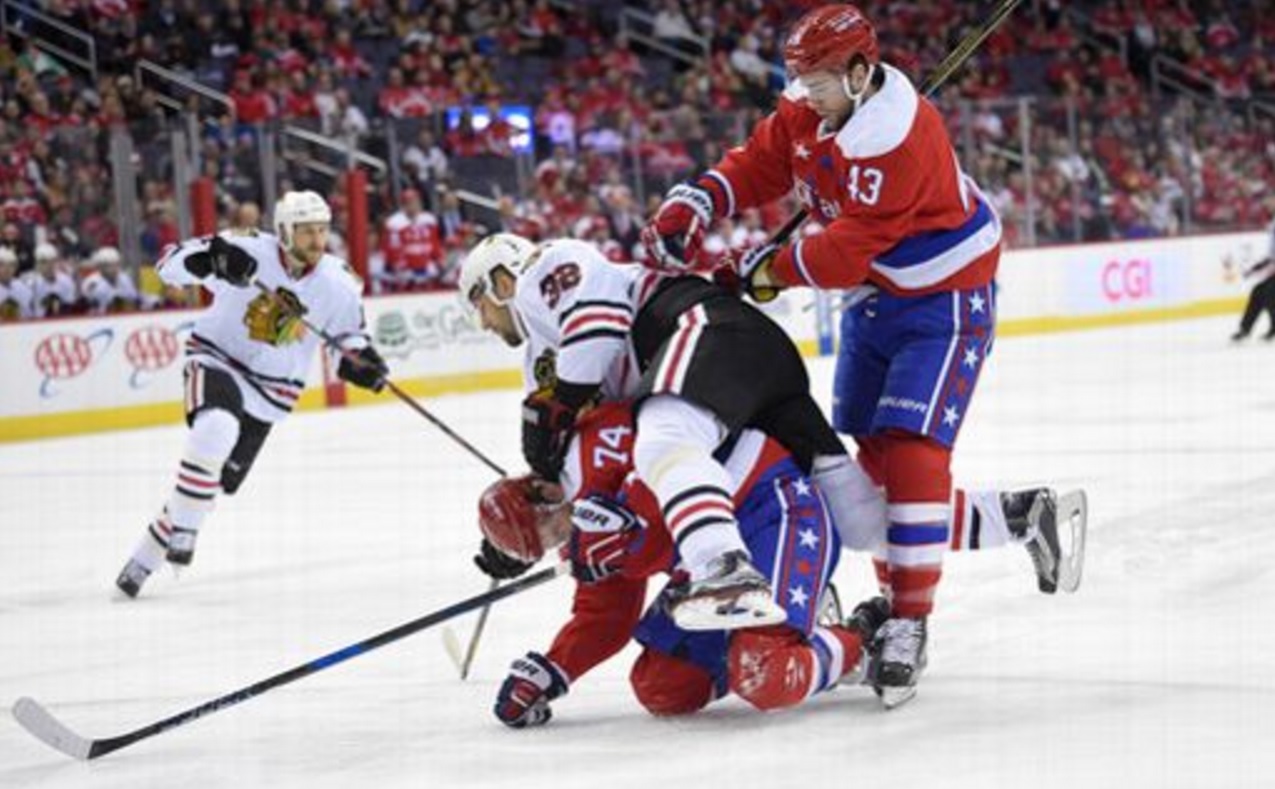 Coming into Friday night, the Blackhawks had won four straight.

Coming into Friday night, the Capitals had won seven straight.

One team was going to see their streak end, the Blackhawks were happy to extend the success for Washington.

The Hawks haven’t been a great first period team this season, but even by those standards Friday night was ugly. Washington out-shot Chicago 14-5 in the opening 20 minutes and took a 3-0 lead to the room.

Jay Beagle, who scored twice in Chicago earlier this season, opened the scoring at 6:04 into the first. The goal was his third against the Blackhawks this season – and seventh overall. Beagle continued to badger the Blackhawks all night, almost adding a short-handed goal in the second period (he scored a SHG in Chicago).

If the opening six minutes were a barrage, it only took 13 seconds for the game to feel out of reach. Nicklas Backstrom scored right off the faceoff following the Beagle goal to extend the lead to two.

It felt like a moral victory that took more than 11 minutes for the next goal to come, but it came off the stick of Brett Connolly and Washington led 3-0.

Coach Joel Quenneville didn’t make the move to Scott Darling after the first, hoping that the skaters would shift the momentum. At 6:32 into the second, Vinnie Hinostroza beat Braden Holtby to get the Blackhawks back to within 3-1… in theory. But the Caps challenged that Marian Hossa had interfered with the goaltender. Unfortunately, the league agreed.

Explanation of Coach’s Challenge at 6:32 of the second period in the @NHLBlackhawks/@Capitals game. #CHIvsWSH https://t.co/2HTawdZlPE

The second saw the Blackhawks with more chances – Chicago actually out-shot Washington 12-10 in the period – but only a Tom Wilson goal stayed on the board. Chicago had two worthless power plays in the second.

TJ Oshie padded the lead with his 14th of the season at 8:11 into the third and Quenneville mercifully pulled Crawford. He left the ice having allowed five goals against 30 shots; his teammates hadn’t yet put a 20th shot on net when he was replaced by Scott Darling.

Friday night was the second time this season Crawford was on the losing end of a 5-0 dumpster fire; the other was Nov. 11 in Edmonton, a game in which he played all 60 minutes.

After Crawford was pulled, Quenneville also made a change up front. Ryan Hartman moved up to skate with Hossa and Jonathan Toews. It didn’t help much; the Hawks were still shutout by Holtby.

With 92 seconds left in regulation, Beagle scored his second of the night to make the score 6-0. Half of his eight goals on the year have come in two games against the Blackhawks, and his name will now undoubtedly be linked to every Western Conference team in trade rumors.

The Blackhawks are now 9-2-2 in games in which Michal Rozsival dressed this season. He replaced Michal Kempny in the lineup on Friday night.

Every line in the box score was crap.

Eight of the 18 skaters failed to register a shot on net. Patrick Kane led the Hawks with five.

Beagle finished with eight shots on net, one-third of the Blackhawks team total on the night.

Jonathan Toews was fuming after the game. Very short with his answers. Only a handful of times I've seen him that pissed after a loss.

But the Blackhawks stayed out of the penalty box all night. So they’ve got that going for them… which is nice.

Chicago will face another red-hot team on Sunday, but Minnesota is sitting in the Hawks’ rear view mirror atop the division.

31 thoughts on “DC Depression From Blackhawks”