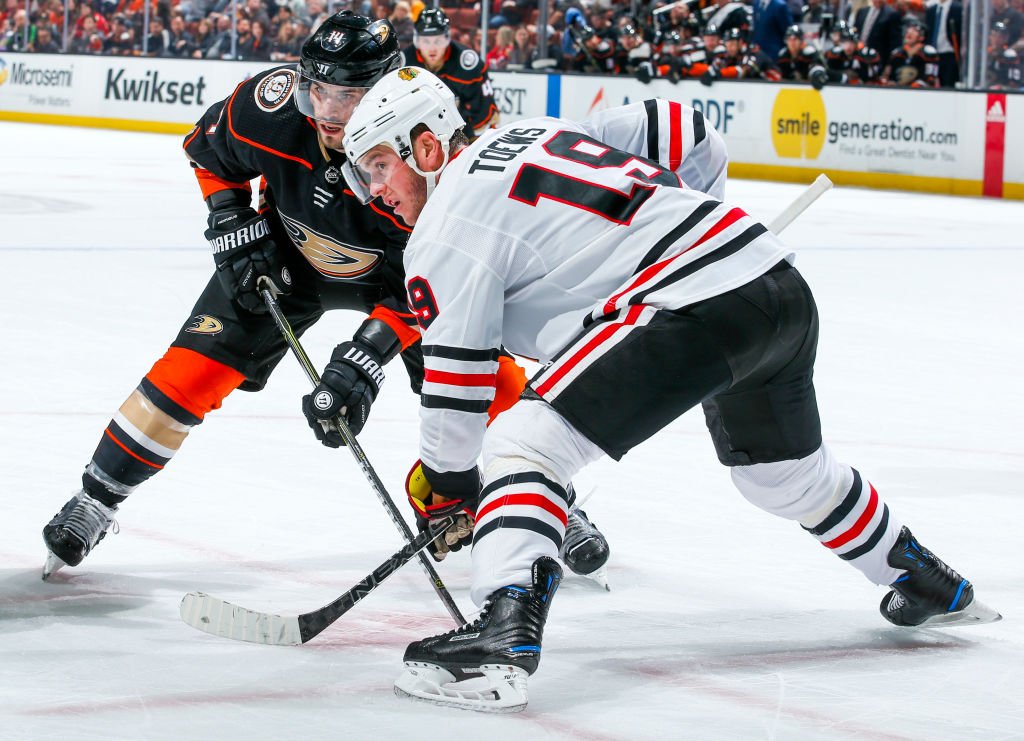 The Blackhawks started a California trip in Anaheim against the awful Ducks on Wednesday night. Chicago desperately needed to get back in the win column after two tough losses over the weekend; Anaheim came in having scored twice in their previous three games.

The biggest news for either team heading into the game was the return of Corey Crawford, who made his first start since Dec. 16.

The first period could have cured insomnia. Chicago out-shot Anaheim 13-8 but neither team appeared to want to be there. Crawford was tested a couple times and looked good, but it certainly looked like both teams were simply going through the motions.

If the Hawks needed something to wake them up Rickard Rakell obliged with a terrible hit on Drake Cagguila 35 seconds into the second period.

Rakell hits Drake Caggiula from behind … Rakell has been ejected. pic.twitter.com/Wru7lkxKj6

Rakell got a five-minute major for boarding plus a game misconduct. Cagguila struggled to get to his feet and headed straight to the room. He did not return.

Chicago headed to a full five minutes of power play time and immediately took advantage. Alex DeBrincat scored his 35th of the year just 13 seconds into the advantage.

Because the penalty was a major, Chicago stayed on the advantage for 4:47. Unfortunately, the rest of the power play looked like we were back in October – awful.

Making matters worse, Devin Shore scored a short-handed goal to tie the game four minutes later. At the end of the five minutes, both teams had scored once.

At 16:42 with the Blackhawks now short-handed Artem Anisimov stormed up the ice and sniped home his 11th of the year.

On his team's 2nd goal tonight vs the Ducks, Duncan Keith tied teammate Jonathan Toews for the 3rd most career shorthanded assists in @NHLBlackhawks history (15. Most: 29- Steve Larmer)

These two tweets from StatsCentre are your nightly reminder that the Blackhawks need to retire Steve Larmer’s number, and that he should be in the Hall of Fame.

Back on the ice, the Blackhawks once again refused to care enough to hang onto a lead against a team that has struggled to score all year. Carter Rowney was credited with his fifth of the season, tying the game with 1:23 left in the second period.

The Blackhawks had seven minutes of power play time in the second period and were out-shot 15-10 in the period. For a team that needs wins, that is a pathetic effort.

Chicago didn’t appear to want to win the game to open the third period, either. Troy Terry gave Anaheim their first lead of the night at 5:35.

It took ten minutes for the Hawks to answer the Terry goal, but it was the captain who made a terrific play. Jonathan Toews set up DeBrincat at 15:06 for the game-tying goal.

As the Hawks tried to find a way to win their game, Colorado won theirs to stay ahead of Chicago in the standings.

The Blackhawks’ big guns showed up in the end – literally. Toews took the puck away and made a terrific pass to Brandon Saad, who made a fabulous reception of the puck in traffic. Saad got the puck to Patrick Kane in space and 88 knows what to do.

With 16 seconds left in regulation, the Blackhawks took the lead for good. Kane’s 40th of the year was the game-winner.

Crawford made 29 saves in his return to the ice.

Toews had assists on the Hawks’ two goals late in the third period, both of which were marvelous efforts. He also won 18 of 30 faceoffs and was credited with three shots on net in 21:47 on the ice.

Kane led Chicago with five shots on net in 23:55. DeBrincat put four shots on net and scored his 35th and 36th of the season while skating 20:18.

After Cagguila left the lineup, Saad was suddenly skating what felt like every other shift. He was very good in the third period, making the great pass to set up the GWG. Saad skated 22:04.

Erik Gustafsson was credited with two assists in the game on the blue line.